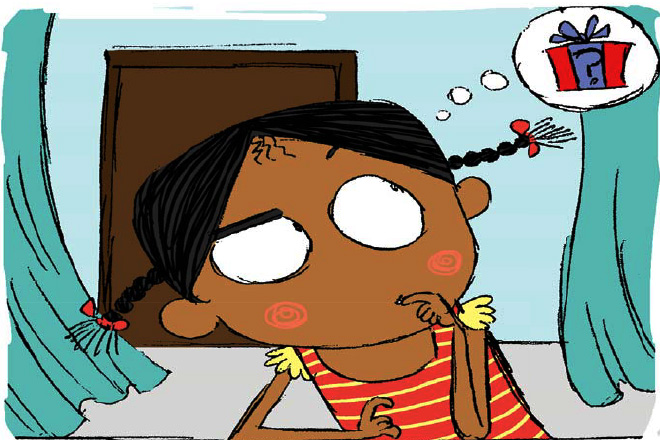 “This time I will give her a different but useful gift,” thought Mandira. She could not come up with any ideas, so she decided to ask her grandmother for help.

“Grandma, Mother’s Day is coming up in a few days, and I still haven’t decided what gift to get. Please give me some ideas,” Mandira requested her grandmother.

Grandma though for a while and said, “I will give you an idea, but before that let me tell you about another mother, it is related to the gift I am going to suggest.”

Mandira was puzzled. “Another mother? Who is that?” she asked. “Why is Earth my mother?” asked Mandira even more confused.

“She is a mother to all of us. We are all children of this Earth—you, your mom, dad, the animals, birds, insects…everyone! Earth looks after us like a mother,” said Grandma.

“How is that so?” asked Mandira.

“Our lives revolve around the revolution of the Earth itself that gives us day and night. When the sun rises, the day starts. We have oxygen to breathe, the rivers give us water to drink, we grow food on the Earth’s soil—everything that we need to survive. We share space and resources with the other species, just like one would share a room with one’s siblings. Earth is like a mother who makes sure we have what we need,” explained Grandma.

“Oh, she is a generous mother,” said Mandira in awe.

A Lesson under the Lake

“Yes, she is, but she can also get very angry just the way your mother gets angry when you do something wrong,” said Grandma.

“But what wrong did we do?” asked Mandira worried.

“We are cutting down trees, polluting the rivers and the air, killing animals for our greed, destroying farmlands and much more,” said Grandma. “Even the other day, our neighbour, Uncle Sharma was telling me about how the river in his village had become unusable because the factory nearby dumped all its waste into it. They couldn’t use the water to irrigate the fields and apparently, all the fish died too,” recalled Mandira.

“Do you see how one thing leads to another? Similarly, all these problems are also causing the Earth’s temperature to rise, because of which the glaciers are melting. Therefore, sea levels are rising and flooding the low lying cities and towns. The excess air pollution is slowly destroying the ozone layer, which is responsible for preventing the harmful rays from the Sun reaching Earth,” said Grandma.

More From Champak: A Campaign for Cleanliness

“What happens to Mother Earth when we do all this, Grandma?” asked Mandira.

“Drought, flash floods and many more natural calamities…,” said Grandma but after looking at Mandira’s frightened expression, she consoled her saying, “But a lot of it can be avoided if we start looking after Earth.”

“How can we do this?” asked Mandira eagerly.

“We can start by planting more trees. That is why as a Mother’s Day gift, I suggest you get your mother a plant. It is both useful and beautiful, and is a gift to Mother Earth as well,” said Grandma.

“That is a great idea, Grandma!” exclaimed Mandira.

On Mother’s Day, Mandira gifted her mother a beautiful rose plant. She then shared with her everything that Grandma had told her. Mandira’s mother was happy at the thoughtful gift, and more so that her daughter cared about Earth.

“Come Mandira, let’s keep this beautiful plant in our garden,” said Mandira’s mother. “Let’s also keep planting more plants in our garden. That way we will be doing our small bit in taking care of Mother Earth.” “Just like you take care of me,” said Mandira giving her mother a hug. “Happy Mother’s Day, Ma, and Mother Earth too!”