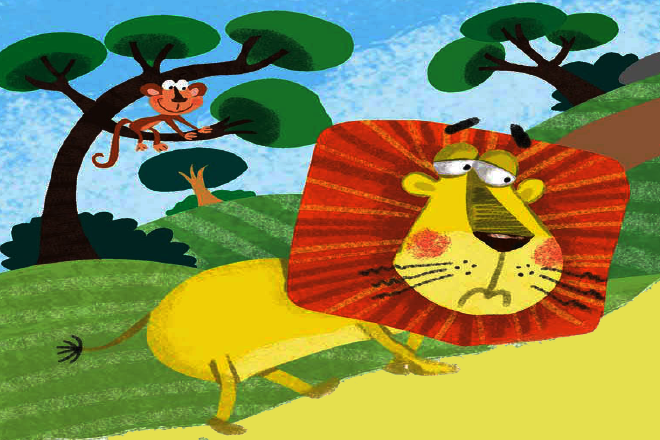 As the temperature rose with the summer heat, water was becoming scarce at Mangalvan. So scarce that even the King, Babbar, the lion was having trouble finding some. He wandered from one watering hole to another and was disappointed to see that they all had dried up. He stumbled through the forest, weak and tired.

Monty, the monkey saw Babbar wandering through the jungle and decided to have some fun.

“Good morning, Your Highness. I hear you’re looking for water. You know what? I just saw some myself,” said Monty, hanging upside down from a tree.

“You’ve only seen it? I just drank a whole litre of it,” boasted Bobby, the crow who perched next to him.

“What’s all this talk about water? Go find another tree to catch up on your gossip and let me sleep,” said Olly, the owl who was sleeping on another branch.

“The King is dying of thirst here and you’re more worried about your beauty sleep? Shame on you, Olly,” said Monty, still in the mood for some fun.

“Is that what’s happening? Forgive me, Your Majesty. I can’t see in the daytime. It is too bright for my eyes that are best suited for darkness. It’s sad to see that our jungle has become so parched. With all the trees gone, there isn’t as much rain as there once used to be and the little rain we get is sadly not conserved. If somebody had taken up the task to keep our trees safe and built bunds to retain water on our land longer, we wouldn’t have been in such a sad state,” said Olly.

Babbar turned red in embarrassment. As king of the jungle, it was his job to take care of it, but he had neglected his duties, as had his ministers.

“Never mind though, there are more pressing issues at hand,” said Olly. “The King of the jungle is thirsty, and I cannot rest until my King’s thirst is quenched!” Olly turned his head, “Monty, my kurta is hanging over there. If you check the pockets, there should be a piece of paper with Dumpy, the donkey’s phone number. Give him a call and he’ll bring the King some water.”

Dumpy, the donkey lived just outside the jungle and had a beautiful garden of his own. He also had a little pond that was always full of water.

“Yes, please give him a call. Here, use my phone,” said Babbar, handing Monty his mobile phone.

Mili to the Rescue

Monty made the call and Dumpy immediately got to work. He filled up a big can with water and loaded it on the back of his motorcycle and zoomed to their location. With a big smile on his face, he handed over the water to Babbar.

“Do you have a glass or a mug for me to drink from?” asked Babbar.

“I’m sorry, Your Highness. I guess I forgot to bring one. You’ll have to make do with your hands,” said Dumpy.

“Fair enough. Just give me some water, I’m dying of thirst,” said the King. Dumpy picked the can up and gently tilted it. Babbar cupped his hands together and drank the water. In only a short while, the water was all gone and Babbar breathed a sigh of relief.

“Thank you for giving me water when I needed it most. Having spent the entire day thirsty, I understand the trouble the rest of the animals must be going through. I promise that I will ensure that nobody goes thirsty in my jungle again.

More from Champak: Clouds to the Rescue

For starters, I’ll speak to my friend, Veer Singh, the lion from the neighbouring jungle to release some water. Our lakes will be full and we will no longer be forced to seek water in the villages and get hurt by humans,” said Babbar.

He apologised to the animals there and promised to plant more trees, conserve rainwater, build more bunds and dig more lakes. He also promised to get rid of all the lazy ministers.

“That sounds great, My Lord. Hop on. I’ll drop you off at the palace,” said Dumpy.

Dumpy took the King to his palace and soon, all the arrangements were made. Water was available for all the animals of Mangalvan and plans for a future full of water were made.