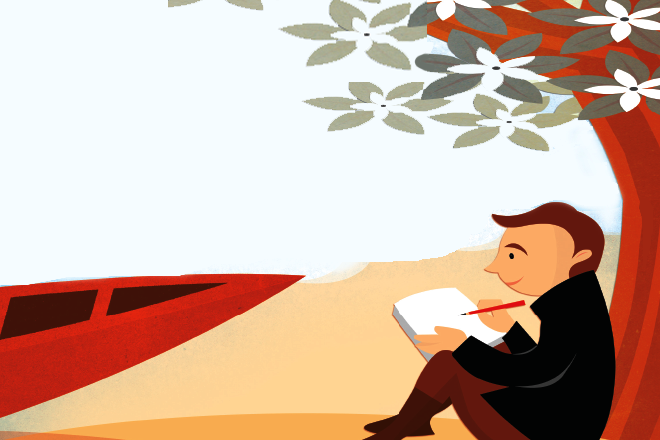 Penzance, England was a 17th century village situated near the sea. It was a small village covered with dense forests on all sides. There were huge mountains, valleys and mines at some distance from the village. The villagers worked in these mines and earned their living.

Little Sir Humphry Davy was a resident of this village. He was a pensive kid. He sat near the seashore and kept staring at the waves and slipped into deep thoughts. He had good analysing skills and was very imaginative. He had an eye for detail while his imagination was out of the box.

Sir Humphry Davy’s friends were always busy in playing and having fun, whereas Sir Humphry Davy kept himself busy in studying the mountains. Sometimes he tasted the seawater and wondered why it is salty. “What in the sea water gives it a salty taste?” he thought. He often smelt the gases coming out of the stove and tried to find out what effect those gases have on human body.

Sir Humphry Davy was keen on studying nature more than his studies. He studied the trees, birds, animals, wildlife, sky, mountains, and stones. He also made notes in his diary.

One day, Sir Humphry Davy drew a picture of a strange lamp in his notebook. It was an oil lamp that was covered by a mesh of olive branches.

“How foolish is this!” said his friend looking at the picture, “If you make a web of olive branches, they will get burnt.”

“And the web will decrease the brightness of light. What is the use of designing a lamp that doesn’t provide adequate light?” added another friend.

“Now please stop drawing such useless pictures and come out to play with us,” insisted his friends.

Sir Humphry Davy replied, “I am sorry. I won’t be able to join you. I have bought a book on chemistry from the library. I have planned to read the entire book today.”

He did not have sufficient resources. Hence he managed with whatever little he had. He used his kitchen stove as the laboratory burner to conduct heating experiments. He used to get so engrossed with his work that he often forgot to have meals. Sometimes he stayed up all night working.

When Sir Humphry Davy became an adult, he developed interest in a new kind of gas. He found a gas which would make one laugh hysterically when one smelt it. Scientists believed that it was a poisonous gas and was fatal to human beings as well as animals.

Sir Humphry Davy was brave and curious. He repeatedly smelt the gas a number of times, and hence proved that it is not a fatal gas and can be put to use for beneficial purposes. The chemical name of that gas was nitrous oxide. It is also known as ‘Laughing gas’. It is known to reduce the sensation of pain. Medical practitioners soon accepted Sir Humphry Davy’s research, and stated using the laughing gas prior to surgeries. It helped in easing the pain sensation in patients. Sir Humphry Davy became famous all over owing to his research.

Sir Humphry Davy now started his research on electricity. He found that if light energy is passed through water, the latter splits into hydrogen and oxygen. He passed light through various acids, solutions and mixtures. He noticed several chemical changes taking place in the mixtures. This was known as electrolysis of water.

Sir Humphry Davy also extracted salt from the sea and studied it. He discovered two elements called sodium and potassium from the salt.

Sodium is a very active salt. It catches fire when it comes in contact with water. Hence sodium is always kept immersed in oil. The discovery of sodium and potassium was another feather in Sir Humphry Davy’s cap.

During those times, people had to frequently face explosions in mines. The primary reason for these explosions were combustible gases called Firedamp, one of which is methane. These gases accumulated in large amounts in those mines. People had to light lamps to get rid of the darkness in the mines. This lighting of the lamp and the presence of damp gases caused the mine explosion. Many people lost their lives due to these explosions. Sir Humphry Davy started studying the combustible gases in the year 1815. He found that damp gases required a lot of air and high temperature in order to catch fire. He also found that these gases cannot catch fire in a metal pipe as the metal reduces the surrounding temperature. Sir Humphry Davy thus invented a safety lamp based on this principle.

He made a thick elemental mesh around the lamp. The lamp emitted bright light inside the mine. The metal framework lowered the temperature, eliminating the risk of an explosion. This discovery of Sir Humphry Davy was considered no less than a miracle. In this manner, the lamp allowed miners to work safely in the presence of combustible gases. This lamp was named as ‘Davy’s Safety Lamp’.

This lamp looked exactly like the one Sir Humphry Davy had drawn in his childhood, and his friends had made fun of it. The only difference was that this lamp had a metal framework as opposed to lamps made up of olive branches.

With all of his discoveries and inventions, Sir Humphry Davy proved that imagination is useful and is a gateway to reality.

One can manifest his imagination into reality if he works hard and is dedicated. And thus one can aid in the betterment of mankind.