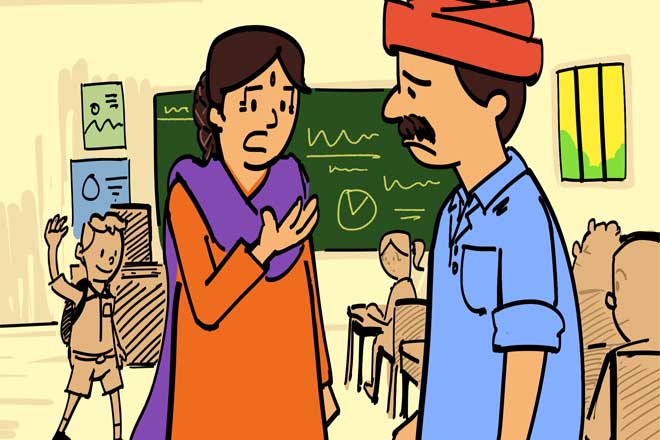 Balu was a poor farmer who lived with his wife Radha and son Sohan in a village. Both Radha and Balu loved their son a lot. They worked hard to provide for Sohan. Everybody in the village teased Balu because he did not allow his son to work in the fields and would ensure that he spent all his time studying.

“There goes Balu with the future IAS officer!” the villagers would joke whenever Balu and Sohan walked by.

But that was not what worried Balu. Sohan was not interested in studies. He would only sit down with his books when his father was around and then run off to play with his friends.

Balu worried about his son’s lack of interest in studies. One day, he went to Sohan’s school to talk to the teacher. “Madam, Sohan does not seem to enjoy his studies. What can we do? Would you give him extra attention?” Balu requested her. “Sonu hardly comes to school. I thought you had stopped him from attending school,” said the teacher surprised.

On hearing this, Balu became very sad. That evening, when Sohan came back home after playing, he saw his father upset. Balu gently tried to make his son understand the importance of going to school and gaining education.

Sohan did not like seeing his father sad, so he decided to go to school regularly.

Even after a few weeks of going to school, Sohan did not find school interesting.

A few days later, Ramdin, their neighbour, fell sick. Ramdin’s wife, Saya came running to Balu’s house and said, “Can you please fetch the village healer? Only he will be able to cure my husband.”

“Saya, we need to call a doctor, not the healer. Remember what the government health worker advised us last month? Only a doctor can diagnose the illness correctly and give medicines,” said Radha.

Sohan was surprised to hear this. “How can a doctor find out what is ailing Ramdin uncle?” wondered Sohan.

Meanwhile, Balu, accompanied by another neighbour, went to the town immediately and came back with the doctor. After being treated by the doctor, Ramdin felt better.

The next day, Balu and Sohan paid a visit to Ramdin’s house. The doctor was also there to check up on Ramdin.

“Hello, Ramdin. We dropped by to see how you are doing. We were quite worried about you,” said Balu.

“I am feeling much better, thanks to Doctor Madam who treated me,” said Ramdin, smiling gratefully at the doctor.

Sohan kept staring at the doctor, curiously observing all that she was doing. The doctor too noticed Sohan looking at her. “Doctor aunty, can I ask you a question? How did you know how to treat Ramdin uncle?” asked Sohan.

“I am a doctor. I should know how to treat my patient, right?” replied the doctor.

“But who taught you what medicine to give?” asked Sohan.

“I studied all about that in a medical college. There, we were taught how to diagonise an illness, its treatment, and how to prevent some diseases,” said the doctor.

“Yes, you need to study in a medical college to become a doctor. And anyone can become a doctor if they study hard and get good marks right from school,” said the doctor. “When you become a doctor, you will be able to help so many people in your village.”

That night, Sohan kept thinking about what Doctor aunty had said.

“What happened, son? Why haven’t you gone to sleep as yet?” Radha asked worried. “Is something bothering you?”

Radha smiled and said, “Why not? That is why your father has been asking you to study well. We are lucky that the doctor who came today has offered to come to our village regularly, but there are so many people out there who do not receive proper medical care. You will be able to help them all if you become a doctor,” said Sohan’s mother.

“Ma, from now on, I will study well and aim to become a doctor!” said Sohan confidently. From that day on, Sohan’s attitude towards school changed for the better. He looked forward to going to school every day and he put his best effort to study.

After a few years, Sohan grew up to become the first doctor in his village.