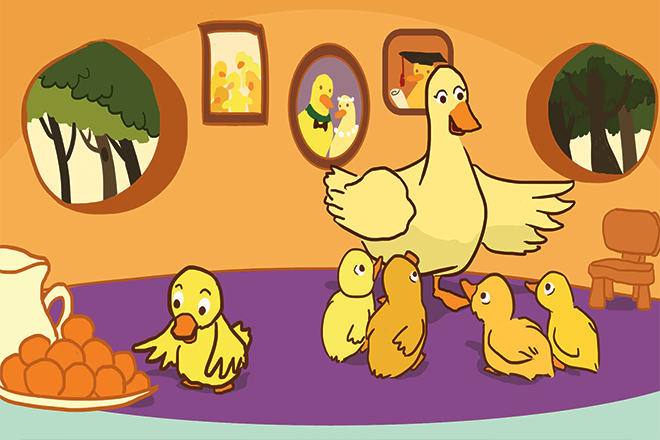 Chuchu was a mischievous little duckling and he would always be thinking of ways to fool other people. His mother Milly would try to get him to stop but it was of no use. Nothing stopped him from playing pranks on others.

One day, there was a festival in the area. The other ducks and ducklings were celebrating it by bursting crackers, playing with colored powders, singing and dancing on the streets.

Milly had given all the ducklings a bath, and now it was her turn. “Sit here quietly and wait for me. Don’t step outside. Everybody is playing with coloured powders and you don’t want to get any of that stuff on you,” she said.

While all his brothers and sisters sat patiently inside, Chuchu couldn’t control himself. He ran outside alone to take part in the festivities.

Chuchu walked amongst the others who were celebrating with coloured powder and firecrackers. He saw a big drum of coloured water. Wondering what colour it was, he climbed to the top of the barrel and peered inside. Suddenly, he lost his balance and fell into the drum.

He jumped out right away, but it was too late—his feathers were dyed red. He began to shiver in the cold. He felt better when he moved into the sunlight.

When he took a look at his wings, he was shocked. “If my wings are red, that means, my entire body is red too,” he said. Excited, he walked back to his neighborhood.

When Chuchu reached his neighbourhood, all the other ducklings stopped playing and stared at him. They had never seen such a colourful duckling before.

“Who is this? I’ve never seen him before. Where did he come from?” asked the others. Chuchu was thrilled when he heard this because it gave him an idea for a prank to pull on everyone

“I am a robot duckling. The humans made me,” said Chuchu in a flat, robotic voice.

Chuchu wandered around the neighborhood fooling all the other ducklings. After a while, he got bored of the game and headed home.

When he reached, he saw all his brother and sisters and his mother were all upset. ‘They have no idea it’s me. This is going to be so much fun,’ he thought to himself.

Chuchu approached them and asked his brother Chamcham, “What’s the matter? Why are you so worried?” “Our brother Chuchu is missing. We haven’t seen him all morning. Who are you?” asked Chamcham.

Chuchu fooled Chamcham into thinking he’s a robot, then went up to Milly, their mother.

“What’s the matter, ma’am? Who are you looking for?” asked Chuchu.

“My son, Chuchu has been missing all day. The poor thing hasn’t eaten anything since morning. I hope he’s safe,” she said worriedly.

All the mischievous thoughts in Chuchu suddenly disappeared and his eyes began to well up with tears. Here he was having fun and making a fool of everybody while his mother was worried sick.

Chuchu was just about to tell her that it was him covered in red colour, when Milly said, “Why don’t you go inside and eat something. I’ll go look for Chuchu.”

Reluctantly he said, “Mummy, it’s me, Chuchu. I’m right here. I fell in a drum of red coloured water.”

“Oh my, it is you! Are you ok? Are you hurt? Are you feeling cold? Where did you fall? How did it happen?” asked Milly, picking Chuchu up and holding him close to her.

Chuchu was confused. He expected her to scold him at the least. “Mummy takes such good care of me; can I not ensure that I keep her happy? I will never give her so much grief ever again, thought Chuchu. Chuchu gave Milly a big hug and promised not to do a single naughty thing again. He learned that no prank will make him feel as good as being hugged by his mother does.