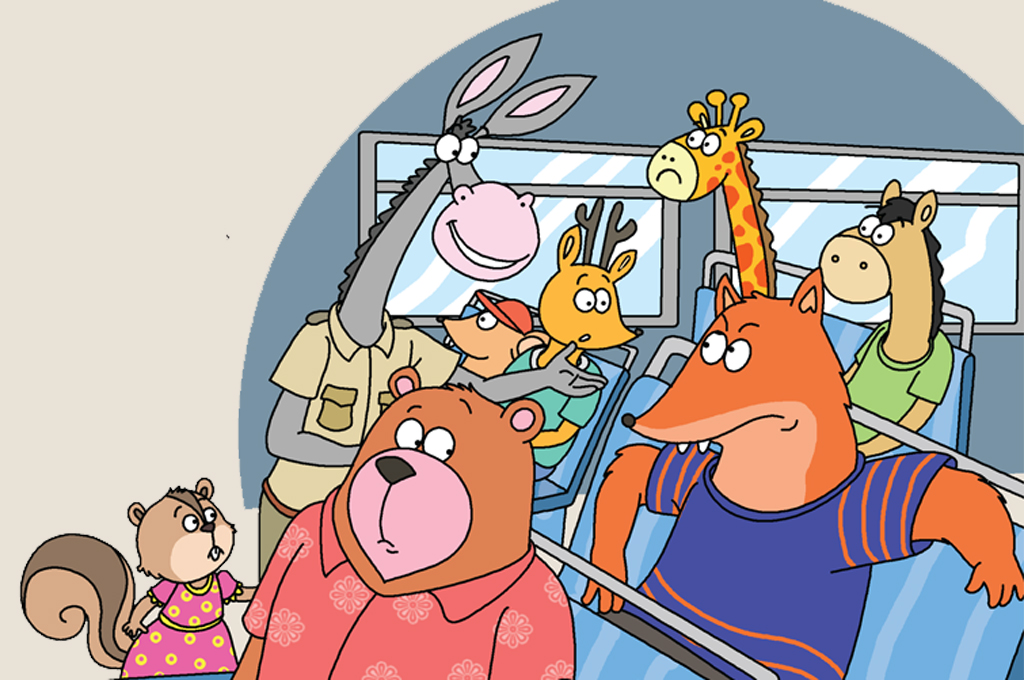 The animals of Champakvan had become grumpy and tired.  They had turned selfish and stopped helping each other.

Damru donkey was unhappy about this change that had come over all the animals. He decided to do something about it.

Damru decided to start a bus service to help tired animals reach different places within the forest. This would save their time and energy.

The fares were kept low to ensure that everyone could avail the bus service. Cheeku rabbit was appointed as the driver of the bus and Damru was the conductor.

Early morning, each day, the big brown bus would start from one end of Champakvan with the grumpy Cheeku at the driver’s seat and the cheerful Damru standing by the entrance.

At every stop, Damru would open the door and welcome the animals inside. Once inside the bus, he would help them find seats.

This happy attitude of Damru continued throughout the journey.  Inside the bus, the grumpy animals jostled for space. They would cling on to the handles dangling from above.

Some animals like Baddy fox would place their bags on the seats, not making space for other animals to sit.

“Arrey, Baddy,” Damru would say, gently but sternly. “Please keep your bag up in the luggage cabin and allow Squiggy some space to sit.”

Baddy would grudgingly obey his order.

If Cheeku resorted to rash driving, Damru would warn him about the consequences.  “Speed thrills, but kills,” he would say.  “Moreover, think about your family. What will they do if something happens to you?”

The grumpy animals of Champakvan did not like Damru’s sunny attitude.

“He is new to this bus business. That is why he is pretending to be nice to everyone,” said Baddy.

“Yes, yes, he is pretending,” said Laptu jackal.  “No one is good to anyone unless they have a hidden motive.”

“You’re right. Damru will show his true colours in a few days,” Baddy said with a grin.

When Damru’s attitude did not change with time, it only made all the animals grumpier.

One bright morning, Jumpy monkey got into the bus. As usual, Damru walked up to him to issue the ticket. Jumpy looked in his pockets, bag and pencil box for the money.  When he couldn’t find it, he realised that he must have forgotten to carry money that day. He was sure that Damru would kick him out of the bus.

“Damru, I forgot to bring the money…” Jumpy said apologetically. “Actually, it’s my mother’s mistake.  She forgot to put the money in my pencil box.”

The other animals were eagerly watching the incident play out.  They believed that they would finally get to see Damru’s true nature.

But then, Damru did something unthinkable.  “Never mind, Jumpy. Next time, don’t forget your money,” he said and moved on to the next passenger.

Jumpy was taken by surprise, and so was everyone else in the bus. Jumpy felt a wave of relief and gratitude wash over him.

When Kangy kangaroo, with a baby in her pouch, hopped into the bus after a few stops, Jumpy immediately stood up and offered his place to her.

Jumpy had done something selfless after a very long time. Kangy, too, felt happy because for the first time she felt like someone cared for her.

While getting down at her stop, Kangy thanked Jumpy wholeheartedly. She had been polite for a change.  The other passengers, who witnessed this, liked what they saw. After a long time, all of them felt genuinely happy.

“I didn’t realise that being polite and well-behaved is so easy,” said Blacky bear, squeezing into his seat to make space for Squiggy. Both Blacky and Squiggy exchanged happy glances.

Gradually, the goodwill and friendship that the animals shared inside Damru’s bus, spread outside as well. One day, Roby, the old rhino, was struggling to get into the bus while Damru was busy issuing tickets. Meeku mouse quickly got up from his seat and held Roby’s hand, helping him board the bus. He even gave up his seat for Roby.

Damru was watching all of this from the corner of his eye. Observing the animals interact politely with each other brought a bright twinkle in his eyes and a wide smile on his lips. His heart hummed a happy tune.

Damru’s bus service helped the grumpy animals of Champakvan look at the happy side of things again!