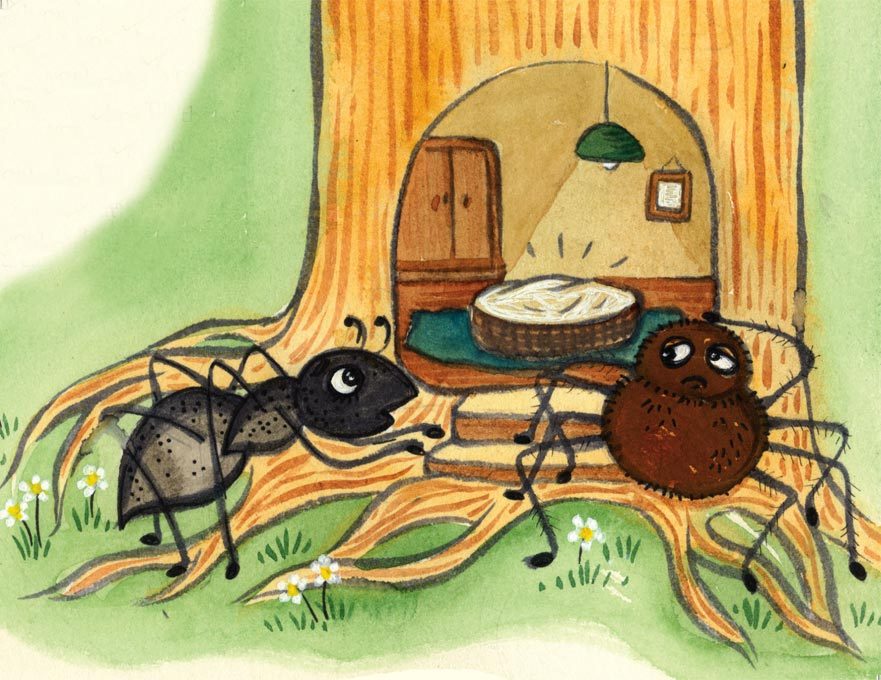 Several animals and birds made their home on a huge banyan tree in the forest of Doodlevan. Amid the roots of the tree lived Lulu, the ant and Izzy, the spider.

They had been friends for a very long time and stuck with each other through the good and bad times.

Lulu had recently laid eggs. She was excited about having several kids.

One day, Lulu had to go to the market to get some food, so she requested Izzy to take care of her eggs.

Izzy kept a close watch on the eggs. However, by afternoon she began feeling sleepy. She tried to stay awake but she eventually fell asleep. After a while when Lulu came back, she found her eggs missing!

She quickly woke Izzy up and asked, “Izzy! Where are my eggs?”

Izzy was shocked. “They were right here when I went to sleep!” she said puzzled.

Hearing the alarmed voices, their neighbour Buzz, the hornet—a wasp-like insect—also came over.

After learning what happened, he said, “I think that Izzy has eaten the eggs.”

Izzy became angry. “That’s not true! I would never eat my friend’s eggs,” she said.

But a seed of doubt had been planted in Lulu’s mind. While she was ready to leave this incident behind, Lulu didn’t trust Izzy as much as she did before.

After a few days, Lulu laid eggs again. She went to the market to buy food after asking Izzy to protect her eggs.

Izzy was alert this time. No one came near Lulu’s house for a very long time. After some time, Izzy pretended to fall asleep.

Looking at Izzy fall asleep, Buzz sneaked into Lulu’s house. Izzy immediately grabbed hold of him and the two got into a fight.

Buzz stung Izzy several times due to which she became weak and dizzy. She was unable to fight off Buzz. Buzz took advantage of Izzy’s weakness and ate all of Lulu’s eggs.

Just when he was about to leave, he noticed Lulu returning. Before Izzy could utter a word, Buzz said, “Lulu! See what Izzy has done! She has eaten all your eggs again. By the time I caught her, it was too late.”

Without giving Izzy an opportunity to explain herself, Lulu started yelling at her. “Izzy, leave this place right away. I don’t want you anywhere near me or my eggs anymore. You’re no longer my friend!”

Injured and heartbroken, Izzy silently walked out of the house. But she was still thinking of ways to save Lulu’s eggs as she knew Buzz would try to eat them again. She also wanted to prove her innocence to Lulu so that they could be friends again.

Meanwhile, Lulu had decided to never talk to Izzy again and became good friends with Buzz. After a few days when Lulu laid eggs again, she asked Buzz to take care of them while she went to the market.

Izzy, who had been keeping an eye on the two, saw this as an opportunity to prove her innocence and to catch Buzz red-handed.

As soon as Lulu left, Buzz entered her house to eat the eggs.

Izzy sneaked up to the house and quickly wove a web around the entrance to Lulu’s house. Before Buzz could eat the eggs, Izzy made a sound. Thinking that Lulu had returned, Buzz rushed to the entrance and instantly got trapped in Izzy’s web.

When Lulu returned, Izzy rushed to her and said, “Lulu, it’s Buzz who’s been eating your eggs. See, I’ve caught him red-handed.”

“You’re lying!” Buzz shouted. “You ate the eggs again and now you are pinning the blame on me!”

“If I am lying, then tell me what are you doing inside Lulu’s house and how you came to be trapped on the other side of this web?” asked Izzy.

Desperate to prove her innocence, Izzy threatened, “Buzz, if you don’t tell us the truth, I’ll not let you leave; you’ll be stuck on the web forever.”

Buzz broke down and confessed to his crimes.

Lulu finally understood that it was Buzz who’d been eating her eggs all along and that Izzy was innocent.

“Thank you for saving my eggs, Izzy. And I’m sorry I didn’t trust you. I hope you can forgive me,” said Lulu, crying.

Izzy gladly forgave her and they were back to being good friends.