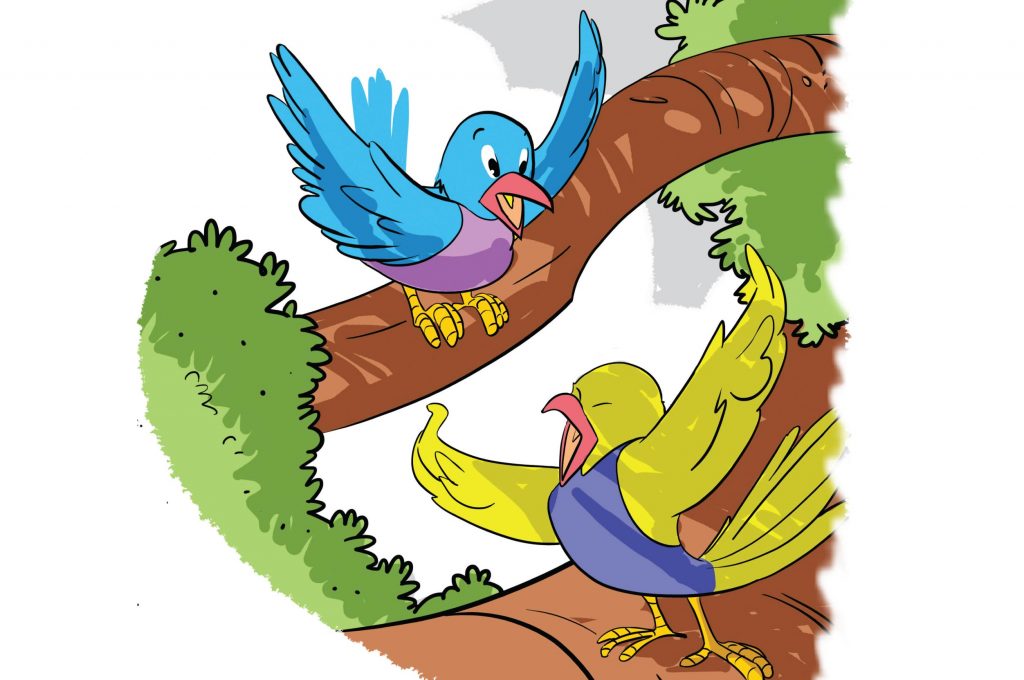 Sally and Dally, the birds, were good friends. They lived on the same tree and always played together but their personalities were different. While Sally believed in hard work, Dally constantly put off doing any work.

One night, the tree on which they lived, got uprooted in a storm. Luckily, both of them managed to escape unharmed.

“The weather is getting worse. We must start building our new houses first thing in the morning,” said Sally.

In the morning, Sally did not waste any time. She went in search of a strong tree and found one a short distance away.

Dally woke up and stretched. She looked around and said, “Oh, it’s still early in the morning. We have the whole day ahead of us. You go ahead and start building your house. Let me sleep some more and join you later,” said Dally and went back to sleep.

Sally went ahead and started work on her new house. She took the help of Harry, the parrot, who was a carpenter. By afternoon, her hard work paid off and her new house was almost ready.

Sally was so engrossed in her work that she forgot all about Dally. It was afternoon when she finally remembered to wake Dally up.

When Dally woke up, she looked around and said, “It’s just afternoon! Let me sleep for half an hour more, and then I’ll wake up and quickly build my house.” She went back to sleep again.

Sally continued working on her house. She fixed the doors and windows, painted the house, and bought new furniture. By evening, her house was ready.

When Dally finally woke up, she noticed the rays of the setting sun and quickly jumped up. By the time she finished collecting logs and began looking for a carpenter, it became dark.

“I don’t work after dark, Dally. If you had come during the day, I would have built your house,” said Harry, the parrot.

Dally then looked for other carpenters. But owing to the darkness and the bad weather, no one was ready to work.

She returned to the tree exhausted. By then, the weather had worsened and it started raining heavily.

Dally perched on a branch and wondered what to do. She saw a beautiful house on another branch and became thoughtful.

“If I hadn’t wasted the day, by now I could have built a house like that one,” Dally said to herself. She regretted being lazy. But now, she could do nothing but get wet in the rain.

Suddenly a familiar voice called out to her.

“Hey, Dally! What are you doing there? Come inside…”

It was Sally. She was calling out to her from inside that beautiful house. Dally sighed in relief and flew into Sally’s house.

“Where were you?” Sally asked worried. “I looked for you everywhere but I couldn’tfind you. I was about to shut my window and go to bed when I happened to notice you.”

Dally was now on the verge of crying. “I’m sorry, Sally. Both of us started this day together. But you worked hard and built this lovely house while I just wasted it away by being lazy.”

She served Dally a warm cup of milk and asked her to get some rest. Early next morning, Sally was surprised to see Dally get ready.

“Dally, where are you going so early in the morning?” asked Sally.

“To build my house!” said Dally, smiling. Sally was happy to see the transformation in her friend.