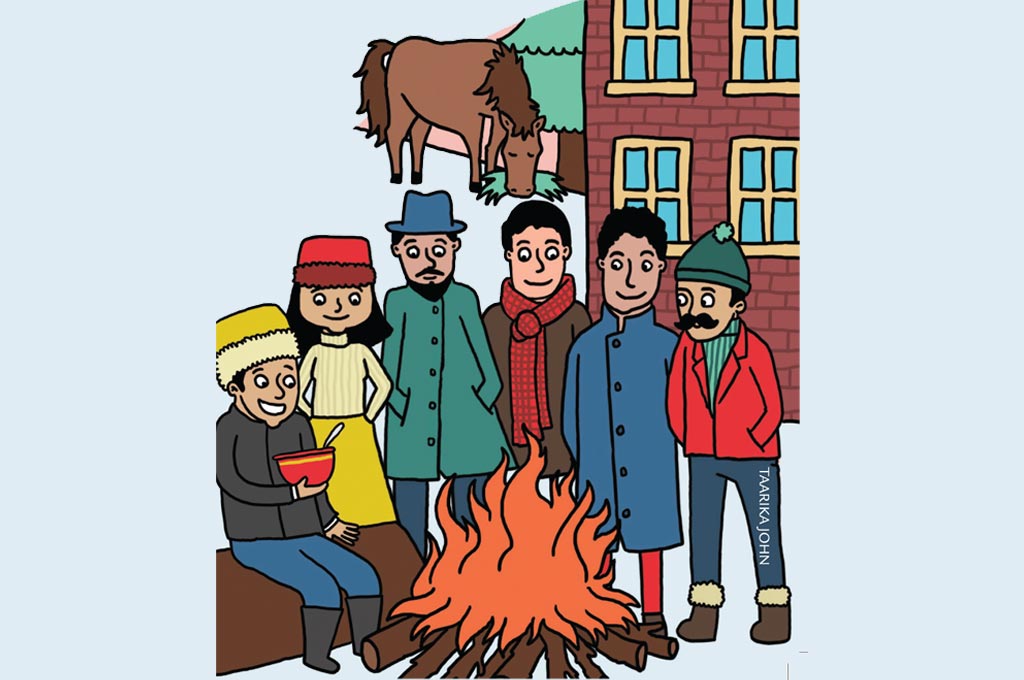 A long time ago in a village called Bulgaria, there lived a trader named Kultaai. He was very intelligent. He had a horse named Koni, upon whom he would travel for his business trips.

On a cold day, Kultaai was riding the horse on his way to the city. The horse was galloping, so it did not feel cold. But, Kultaai was shivering.

Kultaai wanted to reach the city as soon as possible. He patted the horse’s back and said, “Koni! Run faster.”

Koni ran as fast as it could but Kultaai ended up feeling colder and started shivering even more.

Just then Kultaai passed a hotel outside the city and noticed some people sitting around a campfire, feeling its warmth. He stopped outside that hotel.

Kultaai went near the campfire, but there were too many people already sitting around it. There was no space left for him. He then shook his hand with the people there and said, “Hello! I am Kultaai.”

Kultaai had imagined that people around the campfire would scoot over and ask him to sit next to them. However, he was in for a rude shock as they didn’t invite him to join them. He felt upset and was left shivering in the cold.

Kultaai then thought of an idea to ensure that he too got a seat around the campfire to bask in its warmth through this cold evening.

Kultaai went inside the hotel.

“Is there anything to eat?” asked Kultaai.

“Yes! Why not?” said the hotel owner, “What will you eat? We have roti, sabji, soup among other things,” said the owner as he recited the names of the food items on the menu.

“My horse is very hungry. Can I get some hot soup for him?” he spoke loudly.

Hearing what Kultaai said the people sitting near the campfire started to wonder if a horse could drink soup too.

Just then the waiter who was sitting around the campfire went in and got some hot soup for the horse.

All the people got up from around the campfire and went close to the horse and said, “Let’s see how it drinks the soup.” But the horse didn’t drink the soup.

Right then the waiter screamed and said, “Sir! The horse is not drinking the soup.”

“Bring the soup here, I will drink it. You can give the horse some chickpeas and grass,” said Kultaai and sat near the campfire, soaking in its warmth and feeling better in the chilly weather. Everybody came back and sat around Kultaai.

The intelligent Kultaai got a seat near the campfire because of his clever idea.