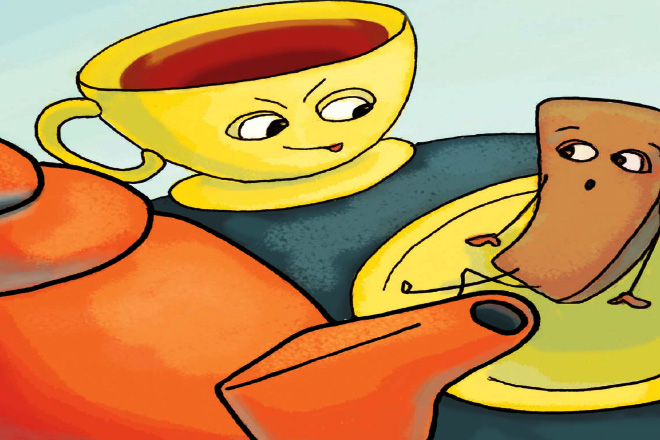 Several biscuits kept in a plate were dozing. Suddenly Motu got up from his sleep and counted the number of biscuits just to find that one of them was missing. He then asked Miss Tea in the cup, “Where is Chhotu?”

“I do not know any Chhotu, Motu,” replied Tea.

To this, Motu said, “I am Motu but you tell me where is Chhotu? Is it that you have eaten him up?”

“I do not eat biscuits,” said Tea.

Motu did not believe her and went ahead to find Chhotu inside the teacup. The moment he came in contact with the tea, he started drowning.

Hearing the murmur, Teetu got up and found that Motu and Chhotu were not to be seen in the plate. So he asked Tea, “Where are my two friends?”

Tea replied, “One sank in me and I do not know about the other.”

Teetu said, “You are telling a lie, Miss Tea. Both the fools must have drowned in you. I will find them out.” Teetu called out to Chhotu and Motu, “Friends, do not worry. I am here to save you.”

Saying this, he inserted his hand inside the tea and he too sank into it.

Petu was the last biscuit left in the plate. After a couple of minutes, he too woke up and found himself alone. So he asked Tea, “Where are all my friends?”

“They are all taking a bath here,” said Tea.

Petu laughed at her reply and said, “Biscuits never take a bath. They all might be drinking tea and having a good time. Let me join them too.”

He said this and bent down to drink tea. No sooner did he come in contact with Tea, he too sank into it.

Tea could not help laughing and said, “That was a big gang of fools!”

Just then Chhotu came running and stopped near the plate. He seemed tired and was gasping for breath.

Tea asked him, “What happened to you Chhotu? Why are you so scared?”

“That rat I tell you…..” said Chhotu trying to calm down and regain his balance, “He had pulled me away to his hole while I was asleep. With great difficulty have I freed myself and come back.”

Chhotu looked at the plate and found no one in it. He, therefore, asked Tea, “Where are all the others? The last I saw them, they were all dozing in here. Where have they suddenly disappeared?”

Tea replied, “Chhotu, they have all drowned in me. You must help them come out of it.” “No, no, Miss Tea….” Said Chhotu, “If I come near you, I am sure to sink in too, so I shall not commit the same mistake that my friends committed.” Saying this, he sat into the plate and went off to sleep.

Tea smiled the widest and thought, “What an intelligent little biscuit!”