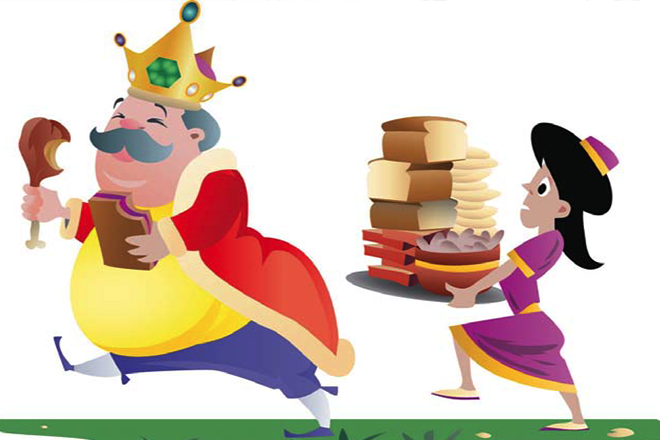 Once there lived a big fat king who used to eat throughout the day. He was always followed by a maid who would carry a tray loaded with snacks. He would have biscuits in the evening, crisps in the night time, bread and butter in the morning and a large bowl of cereals and rice in the afternoon. He was a man who never got tired of eating. He would eat while he talked, walked, sang, felt bored and even when he ordered his troops. The only time his mouth remained still was when he was asleep.

He was also a very greedy man and would never share anything that was his with anyone. Not even with his wife. The queen was a very frail and elegant woman who was kind-hearted and intelligent. She was fed up of watching her husband eat all day long. Many a time she would request her husband “Please stop eating for a while? At least when you are discussing matters with the ministers?”

He always replied “How do you expect me to live if I stop eating?”

“Well, you will not die if you do not eat for five minutes!” She retorted.

He was always very angry when he was asked by others to do something. He always thought that he was right. He was a very proud king and thought nobody could be like him.. Therefore he did many silly things in his life and took everyone for granted.

“There is no man in this world who can eat like me! No one can beat me at eating! And I am proud of it!” He said with pride.

The queen knew that there was no point in arguing with him any more on this issue. Hence, she stopped talking to him about eating.

A few months passed by, but the king did not stop eating! Everybody in the kingdom started making fun of the king and the queen was embarrassed. She wanted to put a stop to her husband’s habit of eating constantly. So she decided to plan a trick that would make her husband to stop eating.

That night, she told him “You know, there is a man who eats more than you do!”

“What! Who?” He asked shocked and dropped a hand full of crisps.

“A man named Ben. He is a shopkeeper in the town nearby and people call him Ben, the eater!” She said in a very casual tone.

“It cannot be true.” He replied harshly. His face turned red with anger. He got down from his bed and started walking around his room as though he was thinking something very serious.

“It is! You did not hear? They call him Ben, the eater! And I have seen him. I have heard he eats more than you.” She replied very coolly.

“He cannot!” He bellowed.

She was terrified. But before she spoke anything more, he spoke “All right! I can challenge him.” He sounded very confident.

The queen smiled broadly. She knew her husband would say this and she was happy that things were going according to her plan.

“Fine!” She said. “I will arrange for it. I will talk to Ben and you can compete with him.”

“Great!” he said. “Arrange for the challenge and watch your husband win!” He was full of pride.

She did not want to talk about it anymore. She bid him good night and fell asleep.

The next day, everything was ready. It was nearly sunset when the competition began. Ben sat in the middle of the hall and the king was seated on his huge throne.

People gathered in the hall to watch the outcome. A group of young boys were there to cheer the king. The queen thought that they were the kids of the ministers. It was decided that Ben would starve for a week if he lost the bet and if the king lost he would stop eating lavishly.

Once the bet began, maids brought roasted beef, huge loaves of bread and butter, a pot full of porridge and water and served it to them. Both the men started eating. The king stuffed his mouth with roasted beef. He looked very funny with his cheeks bulging out on both sides.

Ben ate very fast and finished the roasted beef in no time. He was served more roasts. Seeing this, the king started eating like a barbarian. He started using both his hands holding a loaf of bread in one hand and beef in the other.

They ate for hours continuously. After a while, the king needed a break badly. Therefore there was a five minutes break.

During the break, he fell asleep and the queen knew that he was tired of eating. Ben left the hall and returned after a few minutes.

Five minutes later the king woke up and the competition resumed. They were served with chicken and turkey this time. The kind started breathing heavily and the queen knew that it was because of the effort he had to make to eat. But she felt that he was still determined to continue. He was a man who would not give up easily.

They ate all night. The maids were tired walking up and down the hall and serving them. The crowd too dispersed gradually. But there were a few people who were ready to sacrifice their night’s sleep for this competition.

It went on and on and they continued devouring the food. However by sun rise, the speed of the king had reduced remarkably. The queen knew that he could not eat any more. But Ben seemed to be eating without the slightest bit of exhaustion. After a while, the king gave up. There was applause all around the hall. The queen too applauded but only until the king spoke. “In order to win the bet, you must eat another five loaves of bread.” He ordered. There was complete silence in the hall.

After much argument, Ben accepted to eat five more loaves of bread and was given bread and butter. He continued eating for an hour. The king kept watching him and finally Ben finished. He did as he was ordered. There was a thunder of claps around the hall and it was declared that Ben had won the bet. So the King sadly accepted that he would not eat throughout the day but only at meal times. The queen was very happy and satisfied. She was satisfied by the plan she had laid. The morning before the bet, she had met Ben to persuade him to accept the offer for the bet. Ben had a twin named Bob and the three of them had planned to trick the king. So Bob switched place with Ben during the five minutes break. They were given a bag full of gold coins by the queen for helping her execute the plan.

She had achieved what she wanted. Her plan had worked out too well and nobody ever knew. Ben and Bob left the town after the bet and promised never to return. The king was left with nothing but a limited amount of food at meal times.