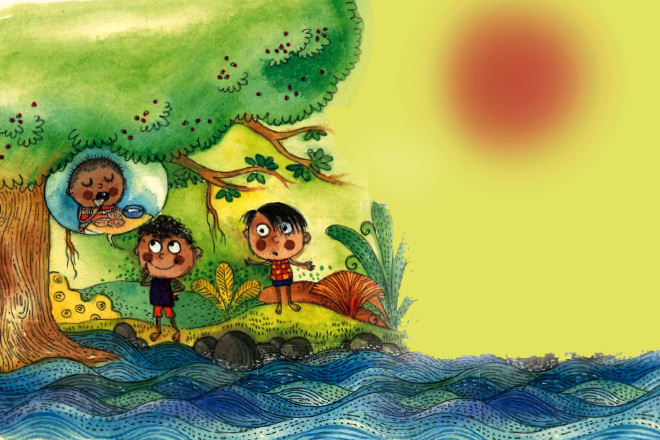 Rakesh and Ramu came running to the riverside. They wanted to be the first to reach, so that they could grab the best aerial roots of the big banyan tree to swing on.

“Where is Hari?” asked Ramu. Their friend was nowhere to be seen.

“He must be still eating his breakfast,” joked Rakesh.

“Yes. He does loves his idlis,” said Ramu.

“His mother makes the most delicious onion chutney and drumstick sambar,” said Ramu, remembering the breakfast he had shared with Hari recently. The river flowed on smoothly. The sun was shining brightly. It was a warm morning. Rakesh and Ramu looked up at the banyan tree. None of the other children from the village had turned up yet, so they were free to choose their roots leisurely. Usually, an argument would erupt over the choice of roots.

“Where is this boy?” grumbled Rakesh.

Suddenly, the two boys heard Hari shouting out to them.

They saw Hari almost rolling down the small hillock a few metres away.

“What happened?” they asked.

Gradually, Hari’s panting stopped and he was able to speak.

“You must come and see this,” said Hari.

“I’ll tell you in a bit; just come with me now,” said Hari, running back the same way he had come.

The other two ran behind him. Together, they climbed the hillock. When they came down, they were near the village boundary. The river water tumbled over the big, black boulders. There were goats grazing and they could hear the buzz of the bees around a hive that was on an enormous jackfruit tree.

Hari kept running till he reached a boy standing near the river. He was of their age. As they went near him, Hari turned to his friends and introduced the boy, “This is Sethu. He is new here. He says he can carry this mountain on his shoulders.” Rakesh and Ramu turned to look at the mountain behind Sethu. They knew the mountain all too well. They had climbed up its slippery slopes numerous times to search for lost goats. They had even hid behind the huge boulders while playing hide-and-seek.

“This is the funniest thing we’ve heard all day!” the two laughed loudly.

Hari felt bad. He looked at Sethu, who simply smiled a quiet, wise smile. Rakesh and Ramu were puzzled by his smile.

“Of course I do,” replied Sethu calmly.

“Then prove you can lift the mountain!” said Rakesh.

Sethu continued to smile confidently and said, “Alright. I will prove it to you but only on one condition.”

“You have to feed me for three days and on the fourth day, I will carry the mountain,” replied Sethu.

Ramu, Rakesh and Sethu huddled to discuss it.

“Do you think he can really carry the mountain?” asked Ramu in a low voice.

“There is no harm in giving him a chance to prove his claim,” said Ramesh.

“And besides, if he does carry that mountain, we would be the first among our friends to have seen such a thing. Then we can use this fact to demand the best roots to swing on every day,” said Sethu excitedly.

On the second day, Rakesh and Ramu brought lunch, which included tamarind rice, potato fry, papads, curd with pickles and a big bottle of buttermilk to wash it all down. After eating, Sethu laid down under the shady banyan tree to have a nap.

On the third day, the three brought whatever snacks their mothers had made at home—murukkus, samosas, laddus, roasted groundnuts, vadas and so on. “Some rotis and chicken curry would have been nice. But these will do, too,” said Sethu, while munching on a samosa.

“This must be in preparation for the feat,” thought the three friends.

That night, the boys were so excited that they could not sleep a wink.

The next day, as discussed, the friends met at 4 p.m. at the foot of the mountain. As soon as Sethu joined them, the friends could not contain themselves anymore. They started to ask Sethu all sorts of questions.

“Did you bring a shovel to dig the  mountain?”

“Are you going to use a magic spell to lift the mountain?”

“How can you hold it up with your skinny hands?”

Sethu did not answer them. Instead, he took his time assessing the mountain—walking up and down, stopping in between to get a good look it, and holding his head thoughtfully as wondering which would be the best way to lift the mountain.

Finally, he turned to look at them and gave them a calm, wise smile and announced, “Okay, I am ready.”

The three friends looked on wide-eyed in anticipation.

The friends were stunned.

“Hurry up! I don’t have all day,” said Ramesh

“But…but…” is all the other three could say.

Looking at the confusion on their faces, Sethu said, “I said I would carry the mountain on my shoulders; not lift it off the ground.”

The boys realised that Sethu had tricked them. Their shock turned to a frown.

“Please don’t hate me. I did it for a reason,” said Sethu, smiling sheepishly.

“What is the reason?” asked Sethu.

“I had heard so much about your mothers’ cooking that I wanted to try some for myself. So, I came up with this plot to get you guys to feed me,” confessed Sethu.

The three friends looked at each other and then burst out laughing. The sound of their laughter filled the valley. “I have an idea! How about we use this to trick the other kids into giving us the best roots to swing on?” suggested Ramu. “This is a great idea!” they all agreed.

The four friends ran back to banyan tree, eager to try the trick.