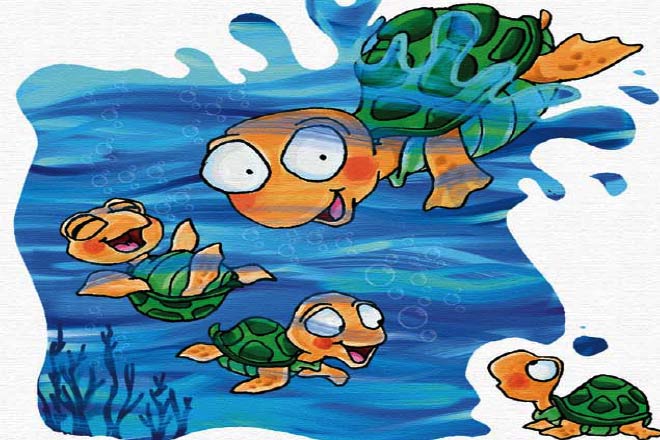 There were a few families of turtles that lived in a river that flowed through a jungle. These families would come out of the river every morning and swim to the riverbanks. The older turtles would lie there and bask in the sun. But the younger turtles were far more energetic and would look forward to playing games.

Sometimes, they would jump into the river water and race with each other. Some other times, they would play games like hide and seek and hopscotch along the riverside. This was the turtles’ little world and they were always happy here.

Turtle meat was the vixen’s favourite delicacy too. She licked her lips and slyly made her way towards the young turtles. The vixen was just about to reach the young turtles when she sneezed loudly.

“ACHOO!” The vixen wiped her mouth and kicked herself.

The turtles, who had heard the vixen sneeze, became alert. They looked around cautiously to see where the sound came from. They spotted the vixen standing quite close to them.

“Run!” the turtles cried and ran towards the water to save their lives. Tiny Turtle was the littlest turtle. He was lying in a faraway corner, basking in the warmth of the sun. He heard his friends’ cries and wondered what had happened.

The vixen spotted Tiny Turtle and pounced on him before he could reach the river. But Tiny was a clever little turtle. He pulled himself into his shell before the vixen could catch hold of him and hid there. The vixen was hungrier than ever now. She tried her best to break the shell open. She tried every possible shell-breaking trick she knew but just couldn’t break Tiny Turtle’s shell open, or even manage to crack it.

Tiny Turtle’s little body was trembling with fear inside the shell. He knew that it wouldn’t be long before the vixen would find a way to break the shell open. And so, he came up with a plan that he hoped would help him escape.

“Miss Vixen,” Tiny Turtle said politely from inside the shell. “I’m sorry but my shell is very hard to break. You will have to soak it in water if you want to soften it. Why don’t you put me in the river for some time? I’ll call out to you as soon as my shell becomes soft. You can pick me up and break my shell and eat me then.” waited. The vixen was starving now. Her plump little stomach was growling loudly. She had been hunting all morning and was feeling quite weak and tired. She couldn’t think clearly on an empty stomach either.

“Very well then,” the vixen told Tiny Turtle. “I will put you in the water. But promise me that you will call out to me as soon as your shell turns soft enough for me to break.”

And so, the vixen put Tiny Turtle into the river water.

“How long will it take for your shell to soften?” the vixen then asked Tiny Turtle. Tiny Turtle was a clever little fellow. “It will take half an hour,” he said. “Why don’t you sit down for a while? You must be tired and hungry.”

“Thanks for putting me in the water,” he said. “I’m going to swim home now. Please find yourself something else to eat! Goodbye!” Tiny Turtle then dived into the water and disappeared. The vixen jumped up.

“Oh no! What have I done?” she cried. “How could I forget that turtles live in water? And that water can’t soften their shells! How silly of me!”

But it was too late for the vixen to do anything. Tiny Turtle was deep in the river, swimming towards his house near the riverbed. The vixen kicked herself hard and decided that she wouldn’t be so foolish the next time she met a clever little turtle.