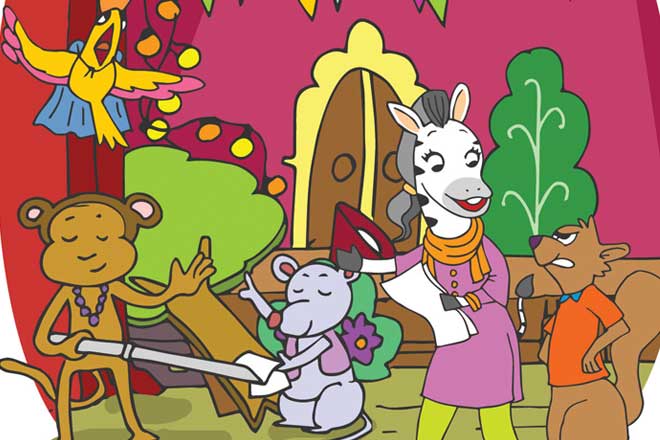 Only a few days were left until Dussehra. The entire forest of Sundarvan was being decorated in time for the festivities. The fair had begun and all the animals were happily shopping and preparing for the festival.

Every year, the Sundarvan Drama Company put up plays on Dussehra. Zizo, the zebra was the director for this year’s play, and was selecting the cast. After she was done, Mongo, the mongoose came in hurriedly saying, “Zizo, I too want to take part in the play. Please give me a good role.” “I have already selected the cast for this year’s play, Mongo. If you had come a little earlier, you may have had a chance too. Let me see if I can fit you somewhere,” said Zizo.

“But you give me a good role every year. You know I am a good actor!” persisted Mongo.

“There’s no doubt about that, Mongo. But to give you a role now would be unfair to the others who came on time for the audition,” reasoned Zizo.

Mongo was angry. He stormed out without saying a word.

Zizo then turned to the other actors and said, “Okay, listen up! Dussehra is in a few days and we have to practise and put up a good show. Read up your scripts today and learn your parts; we shall start our rehearsals from tomorrow.”

The next day, Chucky, the squirrel, Robby, the rabbit, Reena, the crow and the other actors arrived at Zizo’s house for the rehearsal.

Hiro, the horse was in-charge of the actors’ costumes and make-up. He handed over masks to help the actors get into their characters. For the next few days, they all rehearsed diligently.

On the morning of Dussehra, the cast and crew reached the ground where the play was set to take place.  The stage had been set up and decorated with painted backdrops of mountains, palaces, forests, waterfalls and trees arranged behind the stage in the order required for each scene.

A makeshift green room was built near the stage where the actors could change and get ready for the play.

“Hiro, please see to it that all actors look like the characters they are playing,” said Zizo.

“Don’t worry, Zizo. Our audience will believe that the characters are real,” said Hiro confidently.

In the evening, the crowd started coming in. Being a much-anticipated event, there was a large gathering. King Leo and Queen Leona were also expected to attend. Hiro was finishing up the actors’ make-up, when suddenly, there was a power failure.

“What a time for a power failure!” exclaimed Hiro.

In the dark, the actors could hear Zizo saying, “Don’t worry! We have a generator. The power supply will be restored soon. Just stay where you are.”

Within a few minutes, the power was back. Everyone heaved a sigh of relief. Hiro quickly finished applying make-up on the actors.

With only a few minutes left for the curtains to go up, Zizo asked her actors to go to the stage. However, Chucky and Robby seemed distraught. They were looking for something.

“What are you looking for, Chucky? The play is about to start. Go to the stage,” said Zizo. “I can’t find my crown. It was here only a moment ago,” said Chucky.

“What? You can’t find your crown?” said Zizo shocked.

“And I can’t find my shield,” joined Reena.

“Oh no! What do we do now? How did so many props go missing?” asked Zizo.

“We can’t let our actors go on stage without their props,” said Hiro worried.

“We don’t even have enough time to go to the market and get new ones,” said Tommy.

No one could figure out what to do. The audience was waiting for the play to start any moment now. Even the King and Queen had arrived.

While they were racking their brains, trying to find a solution, Bob, the bear entered the green room, dragging Mongo along. Bob was in charge of security.

Bob was also holding a cape, crown and a few other missing props.

“Where did you get these? We have been looking for them,” said Zizo surprised.

“When the power went off, I was on my way to check the main switchboard when I noticed someone rush out of the green room. In the dark, I couldn’t make out who it was. But I had a feeling that something was not right so, I started following the figure. It was Mongo! I searched his bag and found some props and costumes. He confessed that he had stolen them. So I brought him to you. He was the one who had switched off the main power source as well,” explained Bob.

“Why did you do this, Mongo?” asked Zizo angrily.

“I was angry because I did not get a role in the play and wanted to take revenge. I plotted to steal your props to ruin your play,” said Mongo. By then, King Leo had come to the green room to find out the reason for the delay.  When he heard what Mongo had done, he said, “You should be punished for your actions, Mongo. But since today is a day of celebration, I have a different kind of punishment for you—you shall clean up the entire ground after the fair ends! I don’t want to find even a small piece of waste paper lying around.”

Mongo moaned at the punishment.

Zizo and the actors thanked Bob for catching Mongo. And they all went on to stage the play which turned out to be a grand success.