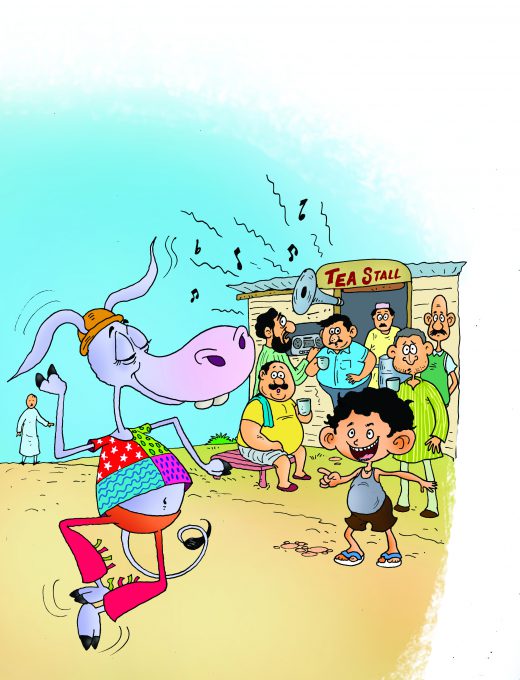 Loud music blared from a roadside tea stall. Dinu donkey was crossing from there. His ears perked up at the sound of music. He loved dancing and considered himself to be a great dancer!

He started to sway gently and got so immersed in the music that he broke into a wild dance!

A donkey kicking his legs here and there caught the attention of people who were enjoying a cup of hot tea at the tea stall. They were puzzled by the donkey’s behaviour. This was something they had not seen or heard ever! A child pointed to Dinu and laughed.

“What’s he laughing at?” he thought Dinu, continuing his wild dance.

“Do you think the donkey is having a seizure?” said one of the men at the tea stall.

Dinu was shocked to hear this.

“What a moron! Doesn’t he recognise a great dance when he sees one?” he thought to himself.

As the volume of the music went up, Dinu’s dancing became more energetic.

He danced so wildly that the people got afraid that something was wrong with him.

“Hey! We have to help the poor creature. Let’s hold him still from both ends.

Maybe then he will stop these weird movements,” suggested a kind man.

“Oh no, oh no, you idiots! You fools! This is a dance and not weird movements,” thought a horrified Dinu.

Before he could think further, some men pounced on him from behind and some held him tightly from the front.

Poor Dinu started to suffocate. He started making weird sounds but the men maintained their hold on him. 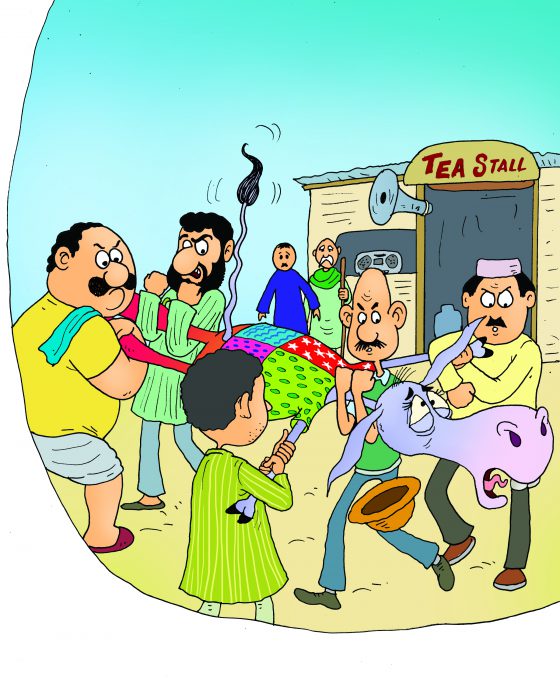 Finally, out of sheer exhaustion, Dinu stopped moving and making noises and stood still. Satisfied that he was better, the men let him free from their hold.

Dinu immediately ran away from there, braying at the top of his voice. Only when he ran far enough and was completely out of breath, he stopped and settled down under a tree. “Maybe they couldn’t bear the thought of me being a better dancer than them!” thought Dinu as he sat down to rest.