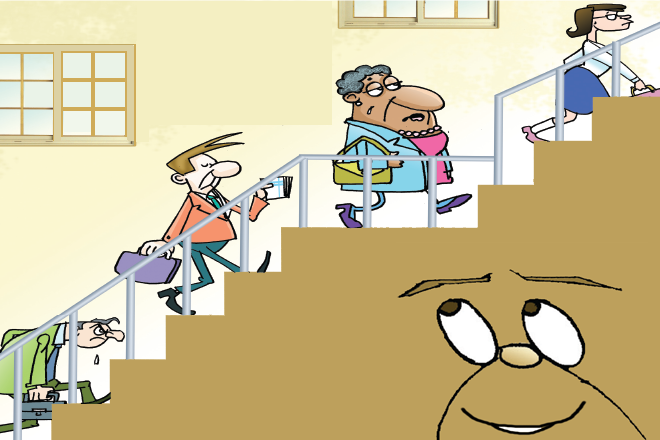 Akash Towers was a tall building. It had many floors. It housed many offices that could be reached by a staircase.

Staff and visitors used to climb the stairs to reach their offices. It was very tiring. It was time consuming. So the Management installed a lift.

The electric lift proved to be very useful. It transported everyone to various floors.

“This lift is great. I would start panting when I used the stairs and now with the lift, I reach the desired floor within seconds,” said a man to his partner while travelling together in the lift.

“I also use the lift all the time. I don’t even look towards the stairs that used to make me feel so tired,” replied the other man.

Many people praised the lift. The lift kept hearing people admiring it throughout the day. It felt very proud. The stairs were located near the lift. Despite the lift being available many people still used the stairs.

“Your days are over. Why don’t you stay at home and rest? People get tired because of you. At least now think of becoming better,” said the lift to the stairs.

“Greetings, Sister. I was thinking of speaking to you for some time now. I am happy that you began the conversation,” The stairs replied humbly.

However, the lift remained proud.

It said, “Don’t try to talk to me. Nobody cares for you in this building anymore. I don’t like your attitude.”

“Don’t say that! You and I have the same job, to take people up and down this building. Then why shouldn’t we do it happily?” The stairs questioned in a patient tone.

The lift said, “Everyone admires me in this building. They only want to use me. I am the queen. You are the servant. Ha..ha..ha…”

The stairs replied, “Don’t be so proud, Sister. You can’t do anything without electricity. I can serve people without anyone’s help.”

The lift got irritated at this true fact.

She added, “Whatever you say, you can’t compete with me. It’s better you agree that I am the queen and you the servant.”

“Don’t argue unnecessarily. How can someone be queen if she herself is dependent on electricity?” The stairs had just completed its sentence, when the power was cut off.

Without electricity, the lift could not function. A board with the words ‘Out of Order’ was placed outside it. People turned towards the stairs.

She thought, “I will teach the stairs a lesson.I will go to any extent for that.” Just then the electric supply resumed. The lift began working when it got power. It started calling people to use it rather than the stairs. “There is no need to tire yourself. I am ready to take everybody up. Come and use me. ” The lift was acting stubborn as she wanted no one to use the stairs.

“Don’t act silly, Sister. It is dangerous to take more people than your capacity. This will only cause danger to their life,” The stairs tried to stop the lift, but it didn’t listen. Taking twenty people instead of four in a hurry caused the lift to start panting. Overloading led to the breakage of the cable. The lift fell down with a loud sound
in the basement. All its pride was lost in a fraction of a second. Many people were also hurt. They were now finding fault with the lift. Even the lift had suffered major damage.

“This lift is useless. We will have to stop using it.” The engineer announced after
inspection. Now, the lift couldn’t control her tears.

She thought, “If only I had listened to the stairs, I wouldn’t have been in such a
state now.”

The lift was regretting her mistake. She thought, “After I am repaired, the first thing I will do is seek the forgiveness of my sister, the Stairs and live happily with it.”

The stairs felt sorry for the lift. However, it also had the satisfaction that the lift had changed for the better.