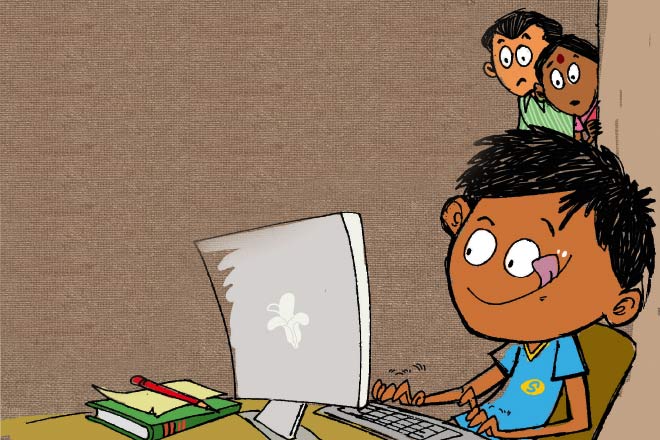 The teachers of Champs School were upset. The students were good at studies, but they did not read anything besides their textbooks. They were not interested in any books that were there in the library.

If they had any free period they would play in the ground. If any project was given, they would just quickly search the internet for information and not go into details. The teachers had tried explaining the benefits of reading, but they never understood this. The children said, “Internet is the best.” Rest of the time they played games on the net or used social websites.

The children felt bored, as they had to study the whole time. They began their day in school and then tuitions. They felt that there should be some play time too.

Their parents were worried as their children were not interested in reading. The parents and the teachers held meetings. They came up with a plan.

The next day the Principal made an announcement. She said the student who gave 50 interesting facts would be given an award. The children were thrilled to hear this. They thought it would be easy, as they would search online and the work would be over in minutes.

However, she clarified that no one could take the help of the internet for this. They could only use the books in the library. They would have to write the names of the books they referred too.

The information had to be on different subjects. They were given a month’s time to complete the work. The children were astonished to hear this. They whispered to each other, “Now what will happen?”

Each child wanted to win. Therefore, they started going to the library every day. The library remained packed with children whether it was lunch time or a free period. Surfing social sites on the internet had also reduced. They would issue books from the library and read them at home. They gathered a lot of information on language, mathematics, astronomy, chemistry and physics. No subject was left untouched. The parents and teachers were very happy to see their diligence. All the children submitted their papers within a month.

They eagerly waited for the results. They were feeling anxious. But it was true. Though she was not bright in studies, reading was her hobby. She had read more books than anyone else and thus provided interesting information on every subject. The information given by other children was nearly the same. Their Principal told the children that it was Deepika’s interest in books that had got her this prize. If the other children formed the habit of reading then they too would get good information.

As an outcome of this competition, the children thus learnt the importance of reading. They said in unison, “Thank you Madam” and clapped their hands.

Now the children frequently visited the library. They had opened a book club near their house and exchanged books amongst themselves to read. Books had become their true friends.