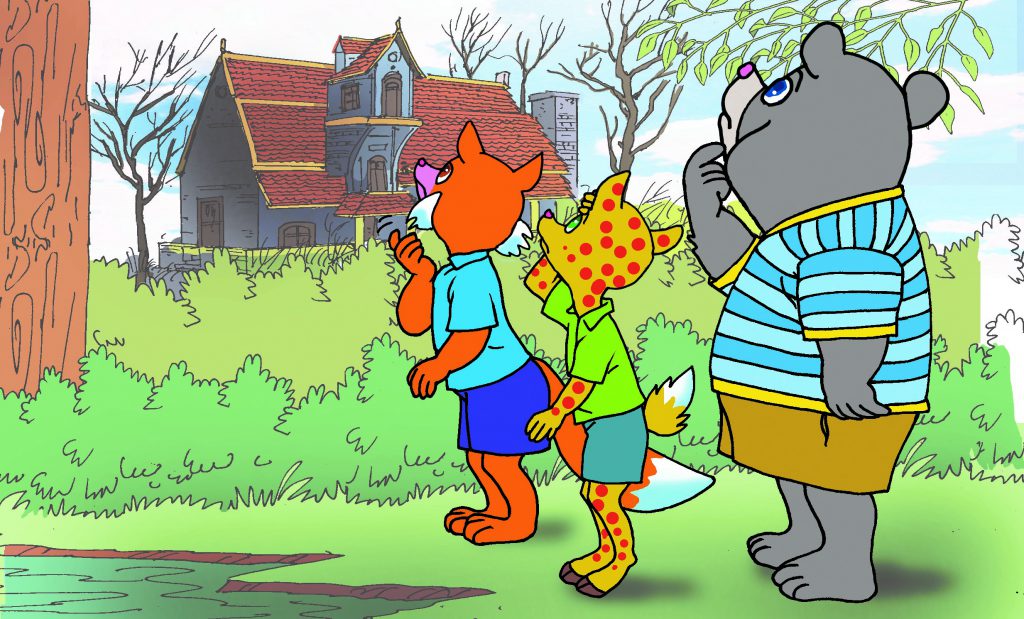 One day, Sona deer, Balu bear and Tilu fox were standing near a lake looking at a distant run-down house.

“There are… stories about it,” said Balu, nervously,

“Those are just rumours to keep people away from it,” scoffed Tilu.

“Yes, there could be some gold boxes waiting for brave Tilu,” mocked Balu.

“Or maybe, there’s some treasure kept for you,” replied Tilu.

“No. I have no intention of going in,” said Balu, firmly.

“Why would you! You’re scared of your own shadow. You won’t be able to step in,” joked Tilu.

Balu was irritated but said nothing. He was scared but didn’t want to admit to it. Unfortunately, so did Tilu.

“How about we go inside the house tonight? Each of us will enter alone. The one who fails to enter will have to treat the others,” said Tilu, challenging everyone.

“I am ready to take up the challenge. You two be prepared to treat me tomorrow,” said Sona, excitedly.

“You wish! I will be the one to receive treats,” said Tilu. And Balu had no choice but to agree.

“As a precautionary measure, I will wear my lucky locket or maybe, I can show that I am entering the house but not go inside. Sona and Tile will not know because it will be so dark outside,” he thought.

Balu felt relieved thinking he could sneak out of the challenge and still keep his dignity intact among his friends. He smiled to himself.

As though reading Balu’s thoughts, Sona said, “How will we know the others haven’t cheated?”

Balu was startled. He felt his heart sinking. He glared at Sona for reading his mind. Now, there was no escape.

All three of them started thinking.

Then suddenly, Sona cried, “I got it! The first one who enters the house leaves a paper with his name written on it. The paper has to be kept at the entrance. The second one who enters will write his name on the same paper and so will the third. Now, you both bring your torches, pencils and I will bring the paper with me.”

Balu brightened as he found a loophole in their idea.

“Sona is a real fool. And so is Tilu. The third person can still cheat by not entering the house and writing his name. And there is no one to check on him. Maybe, I can be that person,” he thought and couldn’t contain his excitement. That night, they all met by the lake. But their enthusiasm had dampened by now.

Fear was written all over their faces. But none could admit that they were scared and call off the challenge.

Each one was waiting for the other to do it but pride forced them to look brave.

They glanced towards the house looked threatening against the dark sky. 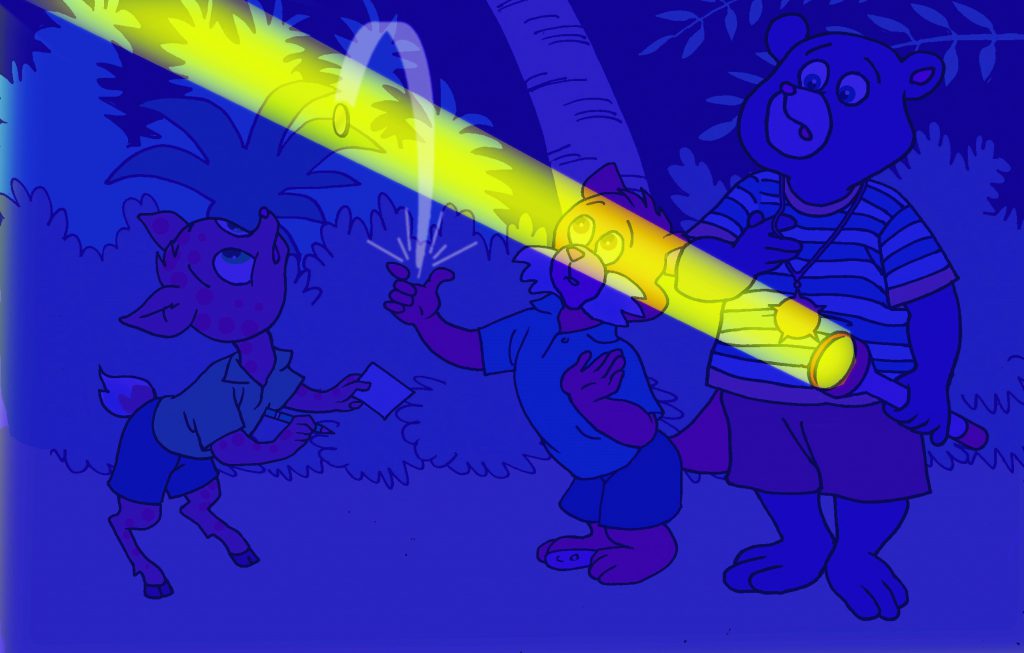 “I am going to be the last person,” said Balu.

Balu realised that he had no reply and it was difficult to fool Tilu.

Not knowing what to say, he cringed.

“We have to play this fair and square. I am going to toss a coin to see whose turn it is to go first,” said Tilu.

Balu felt like banging his head for his haste foolishness.

Tilu tossed a coin and it was decided that Sona would go first, followed by Balu and then Tilu.

Balu looked miserably at the house.

Sona cautiously walked towards the house using her torch to throw light in the darkness.

When she went near the house, she thought she could hear a loud sound. She realised that it was her heart pounding loudly. The house looked scarier as she came near it.

Sona cursed herself for agreeing to the challenge. She thought, “What if something happens to me?”

She looked through the window and saw something move inside but couldn’t make out what it was.

“Bet or no bet. I am not going inside,” she said and sprinted back to her friends. When they enquired whether she had gone in, she managed a silly smile and didn’t reply to them.

Now, it was Balu’s turn to go. Sick with fear, he reached near the house. Suddenly, he heard a door creak and without a second thought, he ran back screaming with his hands tightly grasping his lucky locket.

Once at the meeting place, he breathed heavily and stood with his legs trembling like rubber pillars.

Sona stood silently wondering whether Balu knew that she hadn’t entered the house as there was no paper at the entrance.

“Did you see anything?” asked Tilu.

“I managed to get in somehow. Saw your name on the paper, Sona,” lied Balu.

Sona was astonished to hear this and knew Balu was lying but kept quiet.

Now, it was Tilu’s turn. He had tried to be bold but was sweating with fear.
As he walked to the house, his shirt became damp.

Peeping inside the house, he thought he caught a glimpse of something in white. Absolutely petrified, he yelled and ran back.

Panting, he reached his friends and shouted, “I saw your names on the chit. What do you think of me? No one can scare Tilu.”

Both Sona and Balu knew that Tilu was lying.

Feeling relieved they went home swearing that this was the last bet they would
ever make,

2 thoughts on “The Last Bet”

I want to to thank you for this very good read!! I absolutely loved every bit of it.
I have got you book-marked to check out new things you post…