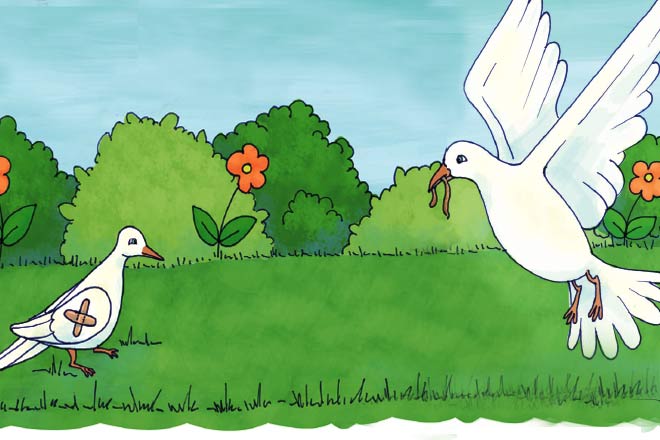 Little Rudra lived in a small house, with his parents, near the city garden. His parents loved him very much.

Now that he was five years old, he thought himself to be very big. Sometimes, he would not listen to them.

One day, Rudra saw a small dove in his lawn. He approached it. It was bleeding. Rudra’s mother also came out to the lawn, when she saw that it was injured. She took the baby dove inside the house. She cleaned its wounds. She gave the bird something to eat.

Rudra was very curious. So many questions came to his mind. From where had the bird come? Where were its parents? Why couldn’t it fly? How did it get hurt? He wondered.

That night, Mother made the bird sleep in a cardboard box. She fed it the next day. She took good care of it. The next day, Rudra went to school very reluctantly. At school, Rudra kept thinking about the bird.

As soon as he returned home, he went to see the dove. It seemed to be recovering. Mother had put it back into the lawn. It was walking.

Suddenly, Rudra saw a big dove approaching. The baby dove ran towards it. The mummy dove had something in her mouth. She fed her baby.

Rudra called out to his mother. Both of them were very happy to see the mummy dove feed the baby dove throughout the day. That night, his mother kept the baby dove inside the house. It still could not fly. If it was kept outside, they feared that the cat would kill it.

His mother explained to Rudra that the baby dove must have disobeyed his parents. It might have come out of the nest when its wings were not strong enough. Therefore, it must have fallen down and hurt itself.

Every day, his mother took the baby dove out and put it on the lawn. Its mummy used to come and feed it. The baby dove soon recovered.

One evening, while Rudra was watching, mummy dove fed the baby. A little later, both of them flew away. Rudra thought to himself, “Perhaps its wings become strong.”

Rudra felt sad after his friend, the baby dove, had left. He was also happy that at last the little dove would be with its family. Rudra vowed never ever to disobey his parents. He had learnt that whatever the elders say, they say so for our good. We must follow them.