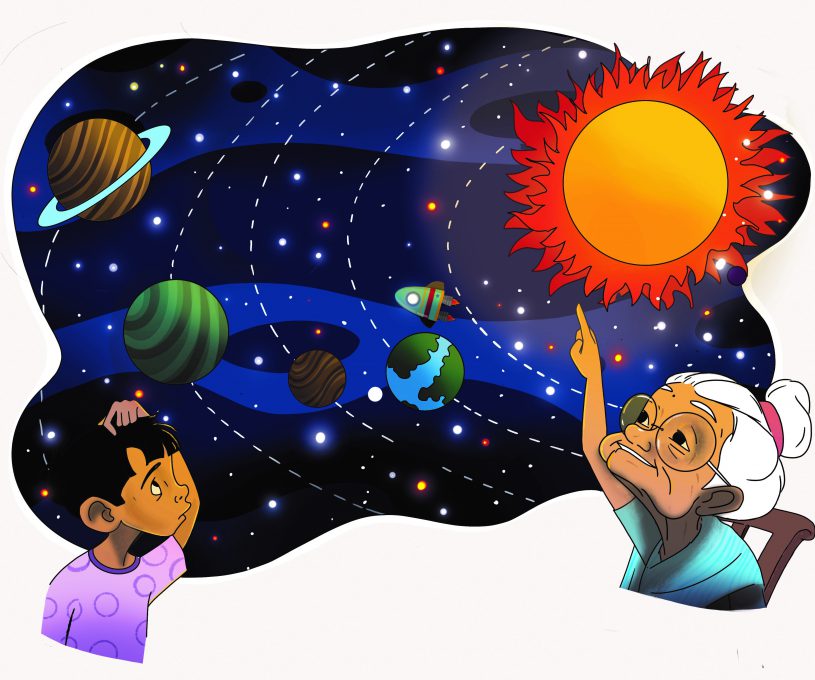 Vikram Lander had been sent to look for water on the Moon. After hearing this news, Rahul went straight to his dadi and said, “Dadi! The story you had told me about the Moon is not true.”

Dadi did not understand what Rahul was saying. “Rahul, what story are you talking about?” she asked.

“Dadi, you had told me that the Sun and the Moon were brother and sister.”

“But, dadi, how can they be brother and sister?” asked Rahul.

“They live far away from one another.”

“You mean to say that by staying far away, there is no relationship between brother and sister?” asked dadi.

“My brother lives 900 kilometres away from here in Mysore. It has been a long time since I met him. So, is he not still my brother?” 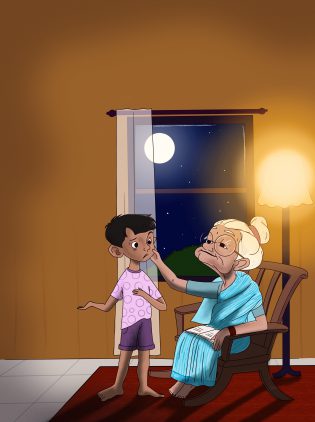 Rahul did not have a reply to this question. He was confused if he should accept the Sun and the Moon as brother and sister. He looked towards dadi  questioningly.

To clarify, dadi prompted him, “Rahul, tell me, who are called siblings?”

Hearing this Rahul laughed. “Oh, dadi, that is very simple,” he came and sat near her. “Boys and girls who are born of the same parents are called brothers and sisters.”

“The children serve their parents who look after their children during their childhood, is it correct or incorrect?” asked dadi.

“Then tell me, what will happen if the Sun stops rising?” 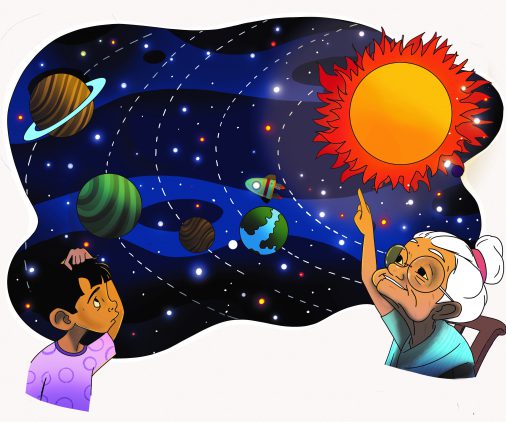 “Oh no!” said dadi, “It is not so. If the Sun stops rising, then the plants and trees cannot grow. There will be no fruits and flowers. It is so because the plants prepare their food from the Sun’s rays. In the presence of the Sun, they release oxygen into the atmosphere. If the Sun’s rays are not received, then there will be no plants and trees.”

“And if there are no plants and trees, what will we eat then?

This is what you want to say, isn’t it, dadi?” Rahul interrupted her.

“But, dadi, tell me, you are saying that the Sun and the Moon are brother and sister, and they play hide and seek every day? How is this correct?” asked Rahul.

“The Moon revolves around the Earth, right?”

“Yes, dadi,” said Rahul, “And the Earth revolves around the Sun.” 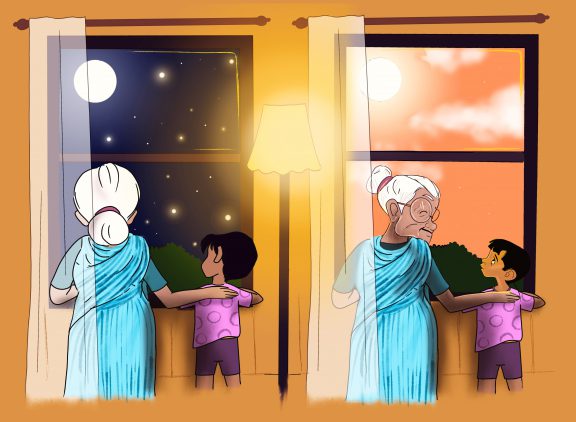 “Yes, dadi. I understand this,” said Rahul. “But if they are brother and sister, shouldn’t they live, eat and drink together.”

“As you know that the Earth is a planet; and the Moon is a satellite. Planets revolve around the Sun. This means they are lifeless. Then, how will they eat or drink?”

“You are right,” said dadi. “There is a lot of distance between the Earth and the Sun.”

Rahul interrupted her, “Not just a lot, dadi, but 15 crore kilometres.”

“Actually, the distance is 1,496 lakh kilometres.”

“My dear, you are also right and I am also right. You are saying 15 crore kilometres; when I am saying four lakh kilometres less, which is the accurate distance.”

“What?” Rahul could not believe her words.

“Oh, dadi! You also know so much about the Sun and the Moon,” said Rahul hugging her. “I had thought that my dadi knows nothing.”

“But dadi, are the Sun and the Moon actually brother and sister?” Rahul still asked.

Dadi replied, “Oh, dear! They are brother and sister in your dadi’s story. A story is the gift of one’s imagination. Because of stories, we learn to stretch our minds to imagine. And sometimes, our imagination may become a reality. 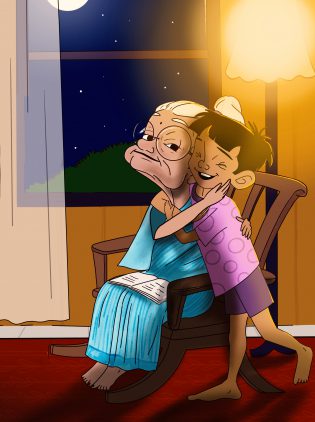 Hearing this, they both laughed.

“Actually dadi, the Moon of your story is really very lovely,” said Rahul and he put his head on her lap. Dadi stroked his head lovingly to put him to sleep.

One thought on “Moon and Sun”

wow amazing but why not pdf available for all these