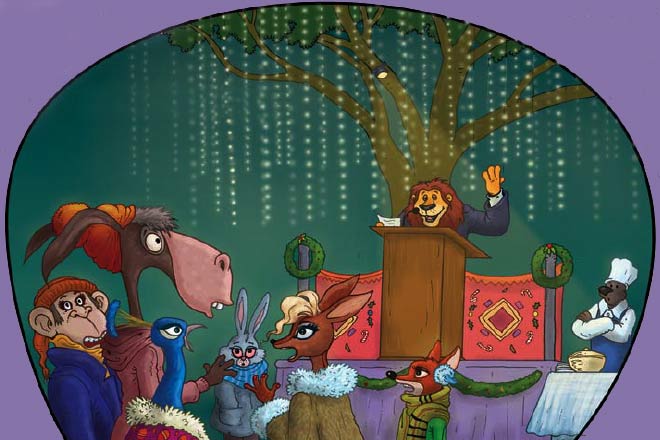 The residents of Silver Forest were eagerly awaiting their king, Leo, the lion’s announcement that came a few days before Christmas every year.

Next day, the king called everyone and said, “As you all know, every year we select one animal among us to be Santa Claus. So please start preparations, as only two days are left for us to decide who will be the Santa this year.”

For the animals, being Santa Claus was a matter of honour. Everyone began preparing for the competition. Some started decorating their houses, while others started dressing up smartly.

Piku, the peacock, was drying his feathers after taking a bath. Suddenly, he heard a voice. “Help me! I can’t carry this bag alone!”

Piku looked out to see who it was. An old and dark animal was carrying a heavy bag on his shoulders and was saying, “Please help me! I can’t carry this bag by myself.”

“Help? I’m sorry, but please ask someone else. This bag is so heavy and dirty as well. I have just taken a bath. I don’t want to get dirty again,” said Piku, declining to help him.

“My house isn’t far. Please help me. I’m too old to take this bag,” pleaded the animal.

“I just said no. Can’t you hear me?” said Piku, losing his temper. “Now get moving from here. I’m preparing for the competition to become Santa Claus. Don’t disturb me!”

The animal walked away sorrowfully. Some distance away, he came across Hinni, the deer.

“Please help me! I can’t carry this bag anymore,” the animal cried out. Hinni saw that an old animal was asking for help, but declined. “Please ask someone else. Can’t you see I’m busy preparing for the Santa Claus competition? I’ve just applied the cream on my body. If I help you now, the cream will get dirty and my skin will not shine anymore,” said Hinni, and turned away.

Suddenly, Dabbu, the donkey arrived at the scene. He was passing by and stopped on hearing the old animal’s cry for help.

“Let me help you,” he said. Dabbu took the bag from the old animal.

“Yes, please help him out,” said Hinni, laughing. “Anyway, who’ll choose you to be Santa Claus?”

Dabbu did feel bad, but he chose to ignore her.

“Careful! The bag’s quite heavy!” said the old animal to Dabbu.

“Not a problem,” said Dabbu.

“Don’t worry! I will wash it afterwards,” said Dabbu, smiling at him. “Where is your house?”

“It’s quite far. You can put the bag down if you want. I’ll ask someone else for help,” said the old animal.

“Don’t worry at all. Let’s go,” said Dabbu, and started walking behind him.

After walking some distance, they arrived near an old house.

“Please keep the bag down here,” said the old animal. “Thank you so much!”

As Dabbu was about to leave, the old animal called out, “Haven’t you prepared for the Santa Claus competition?”

“Who will make me Santa Claus? Neither am I good looking nor do I have any special skill,” saying that Dabbu left.

Dabbu then went and cleaned his house and set up a Christmas tree. That night, all the animals, including Dabbu, gathered on the ground to hear the results of the competition.

“This time I’ll surely be Santa,” said Piku, spreading his feathers. “Who’s more beautiful than me?”

“You’re really handsome,” some of the animals complimented him.

“Oh, but wait till you’ve seen me! Look how fair I look,” said Hinni, the deer. Everyone turned to her.

“Yes, yes, you too could be Santa Claus,” said the other animals. Hinni was elated.

“Hey, even Dabbu has come! You’ve come just as you are, Dabbu. You should at least have dressed up,” said Piku, laughing at him.

“Friends!” said Leo, their king from the stage. “The results this year can come as a shock to all of you. This time our Santa Claus is…”

Piku and Hinni both were ready to go on to the stage.

“What?” everyone at the gathering, including Dabbu himself, was shocked. Leo knew that all the animals were asking why.

“All of you must be wondering why Dabbu and no one else can be a better Santa than him. He is kind and helpful. He helped a weak and old animal who was refused help by many others.” Saying this, Leo narrated the whole story.

“But how can you be so sure that Dabbu actually helped out that old animal? It sounds like a made-up story,” said Romy, the squirrel.

“He’s right! He’s right!” said a few others in support.

“No, it’s not a story. Because that animal was me,” said Leo.

“Yes,” said Leo. “I had set out in disguise to search for this year’s Santa Claus.”

All the animals praised king Leo for his smart decision.

“We’re sorry for being rude, Dabbu,” said Piku and Hinni. “You truly deserve to be Santa Claus.”

Everyone cried out in joy, “Merry Christmas!”