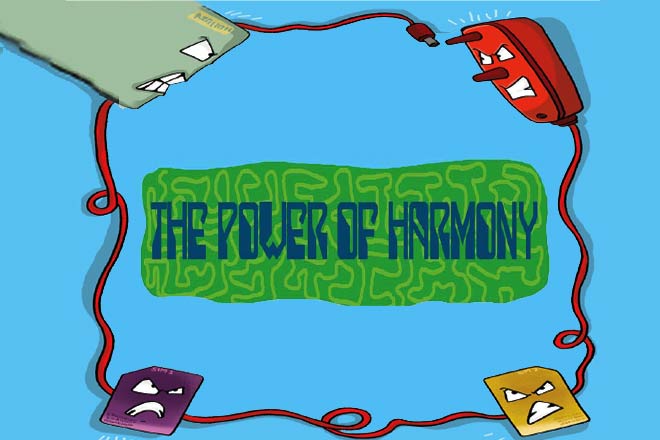 Alfred had two mobile phones. He had put a SIM card of a different network in each mobile phone. One day, while Alfred was browsing in a shop, he came across a mobile phone that had a unique feature.

“It would be better if I buy this mobile phone,” Alfred thought. “It will simultaneously hold my two SIM cards and save me the trouble of carrying two mobile phones. My other phones have become quite old anyway.”

The two SIM cards that Alfred had inserted in the new phone began fighting with each other.

“Alfred uses me more often to make calls,” one of the SIM cards boasted. “You are in here just for namesake. You are always lying in a corner.”

The other SIM card grew furious. It didn’t like being spoken to in such an insulting manner.

“Don’t act smart,” the other SIM card shouted. “All the incoming calls are made to me. I am far more useful to Alfred than you are!”

“You are cheap and everybody knows that cheap things are not durable,” the first SIM card said and sniggered.

“Why should one buy expensive things when the inexpensive ones can provide the same convenience for much less, huh?” the second SIM card said, not wanting to be left behind.

The battery inside the phone had been silently witnessing the SIM cards’ fight for a long time. It couldn’t hold itself back anymore.

“Calm down now,” it said. “You both are arguing pointlessly.” “You ugly, black battery…who asked you to interfere with us? Did anyone ask for your advice?” both the SIM cards said, forgetting about their fight and starting a new one with the battery.

“What do you think I am? You both can’t utter a word without me,” the battery said, blowing its own trumpet. “Don’t you know that the mobile phone won’t work unless it has battery power? So, technically speaking, I am your boss!”

The intensity of the fight increased, and soon the entire handset began trembling because of the commotion inside it. Before the handset could say anything, there was a phone call and Alfred picked up the mobile phone and answered it.

But he couldn’t hear the caller at the other end clearly, because there were too many odd sounds coming from the handset. “There is something wrong with this mobile phone,” Alfred said and immediately took the mobile phone back to the shop. He asked the shopkeeper to repair it but the shopkeeper returned it to Alfred saying that it seemed perfectly all right.

The fight hadn’t stopped as yet. The charger too joined the battle, and argued with the SIM cards and the battery. “Stop thinking of yourselves as superior,” the charger said proudly. “If I don’t charge the battery, none of you will have any existence at all. You should be thankful to me for keeping you in working condition!”

The battery had no answer to the charger’s claim. “Hey! Have you all have forgotten me?” the handset said, trying to prove how important he was too. “You all are fixed inside me. I am your true boss! You all are, after all, my parts.”

The squabble was escalating. And in the bargain, all the parts had completely forgotten that they needed to get back to work. Alfred was very disturbed. He found that his mobile phone wasn’t working, and he was missing out on making and receiving important calls.

He took the mobile phone and the charger back to the shopkeeper again and banged them on his counter angrily.

“Refund my money. This mobile phone is completely useless. There is definitely something wrong with it,” he shouted. “There are strange sounds coming from it.”

The shopkeeper took the mobile phone and charger back from Alfred and told him that he would check them. He then requested Alfred to come back after a day.

Just as Alfred walked out of the shop, a man entered with his mobile phone and charger.

Now, this man had accidentally overcharged the battery of his phone. It had damaged the mobile phone and made it irreparable.

“Your mobile phone and charger are of no use to anyone anymore,” the shopkeeper said loudly, after examining the faulty mobile phone. “They are only worth throwing in the dustbin now.”

The shopkeeper’s words gave the parts of Alfred’s mobile phone a big jolt. The SIM cards got worried. The battery was terrified. The handset and the charger felt quite nervous. “What if this happens to us?” one of the SIM cards said. “What if the shopkeeper tells Alfred we must be thrown away?”

“We won’t let that happen,” the other SIM card said.

“We will never let this kind of situation come upon us!” “We will forget about our fight and work together as a team!” the battery said.

“I agree!” added the charger.

And so, the SIM cards, the battery, the charger and the handset decided that they would forget about their petty squabble and live and work together in harmony.

“Your mobile phone is working now,” the shopkeeper told Alfred when he returned to the shop the next day. “Please pay me two hundred rupees for servicing the parts.”

The SIM cards, the battery, the handset and the charger knew that there was nothing wrong with them, and that the shopkeeper hadn’t serviced them at all. They felt very ashamed that their owner Alfred, who took such good care of them, had to pay the shopkeeper, just because they had quarrelled.

They apologised to each other and made a pact never to fight again.

“We will live and work in harmony from now on,” they promised.

The result of this pact was that the mobile phone worked very well. Alfred was very satisfied. “This mobile phone is better than the ones I owned before,” he told his friends “I am really happy with it!”

When the SIM card, the battery, the charger and the handset heard Alfred, they looked at each other and smiled. They were glad that they had decided to work and live together in harmony.