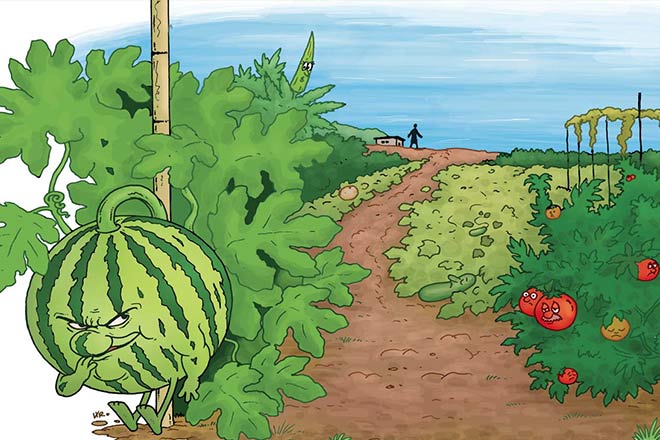 Titan, the watermelon was very stubborn by nature. He never respected anyone, even if they were older than him. Titan was not only big, but he was strong too. Seeing his heavy build, the other vegetables like cucumbers, tomatoes, ladyfingers and muskmelons were all scared of him.

The watermelon patch was in a corner of the farm so Titan was not visible to Nandu, the farmer. When Nandu came near him, Titan would hide behind the leaves. He liked ruling over all the other vegetables and enjoyed making fun of them by calling them, weaklings.

The tomatoes would turn red at Titan’s comments. The cucumbers became leaner because they were scared of Titan, they kept leaning away from him and lost their shape.

The poor ladyfingers were so tired of fear that they actually became like a skeleton. They stopped growing in size.

The big cucumbers hated Titan so much that their hearts became full of bitterness.

Titan continued growing and strengthening himself by doing sit-ups and working out. He would then show off his strong biceps and arms to scare everyone. The ladyfingers and cucumbers wished that Nandu would spot Titan and pluck him.

The ladyfingers and cucumbers wished that Nandu would spot Titan and pluck him.

Let’s hope Nandu sees and takes Titan to the market, or else throws him away in the wastebasket. At least we will be relieved from his pride and conceit,” they said to each other.

The day finally came when Nandu saw Titan. But he was so heavy that Nandu could not carry him. Nandu went back from the farm.

“Hey all you weaklings, mark my words. I will be the costliest watermelon sold in the market. All of you will be on one side and I will be on the other,” said Titan.

Nandu came with his son Chandu. Together they picked Titan with great difficulty and put him inside the cart. Nandu and Chandu plucked some tomatoes, cucumbers, ladyfingers and muskmelons too. They kept
all the vegetables along with Titan inside a huge bag.

Nandu set off to the market where he arranged them. He kept all the vegetables in a line and he kept the watermelon in the centre.

Customers came and bought the tomatoes, cucumbers, ladyfingers and muskmelons. Everybody took a look at the watermelon, but nobody bought him.

When Nandu asked the customers to buy the watermelon all of them gave some excuse. One customer said, “Nandu, how will I take it to my house?”

“This will not even go inside the fridge, and even the rickshaw driver will ask extra money for this,” said another customer.

Hearing the customers’ remarks Titan felt disappointed. He realised his size and weight had no value here.

“What’s the use of being big and heavy when nobody wants me? All those whom I had been teasing have now been sold at a good price,” Titan thought to himself.

Thinking about this brought tears in Titan’s eyes and his pride too was washed away with it. He felt calmer and lighter now. Seeing Titan cry the remaining tomatoes, cucumbers, ladyfingers and muskmelons felt bad and sorry for him.

They tried to motivate him and said, “Titan you should not boast as everyone has their own value. Now that you gave up boasting, we too don’t have any ill feelings in our hearts. Mark our words, very soon you will also be sold at a very good price.”

On hearing this Titan felt very happy and smiled. Right then, a shopkeeper came with his house help and bought Titan for his large family.

Titan waved at his friends and went away happily to the shopkeeper’s home.

be calm, be gentle, humble, humility, modesty, pride, respecting others