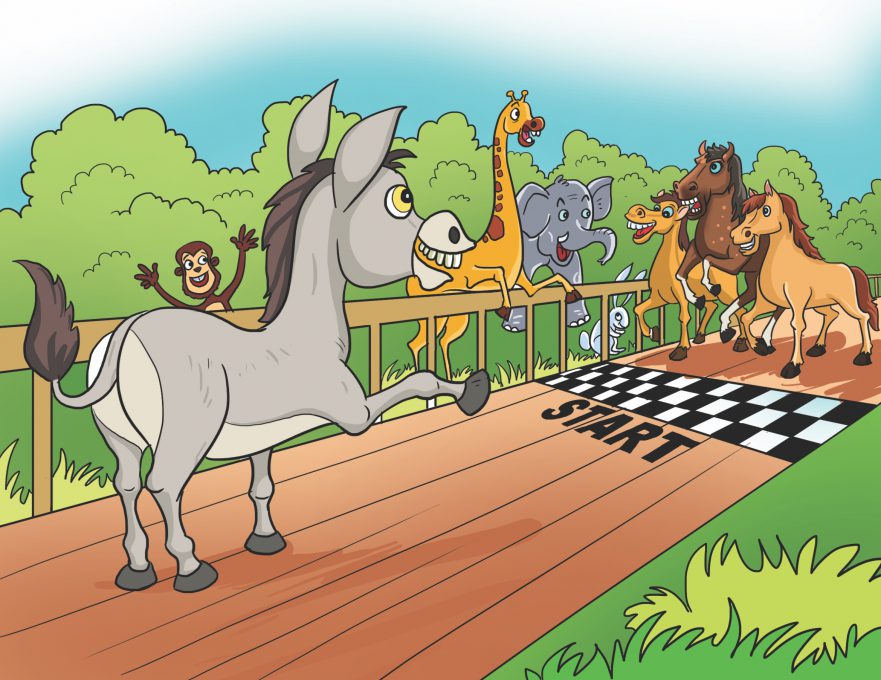 A race was to be held in Chanchalvan forest. All the animals in the jungle had gathered to watch the race. The horses that were to run the race, assembled on the race track.

Though they competed with their own kind, each thought they were better than the other.

Snorting and pounding their hoofs, they glared at each other.

Then, just as the referee was about to blow the whistle and start the race, Bhondhu donkey ran in.

“Stop brothers!” he yelled. “I would like to take part in this race.”

The crowd roared with laughter. Yet, it did not discourage Bhondhu.

“I have practised long and hard, running at the speed of a horse. I believe I run fast,” said Bhondhu.

“Oh! Now a donkey wants to compete with us!” thought the horses. 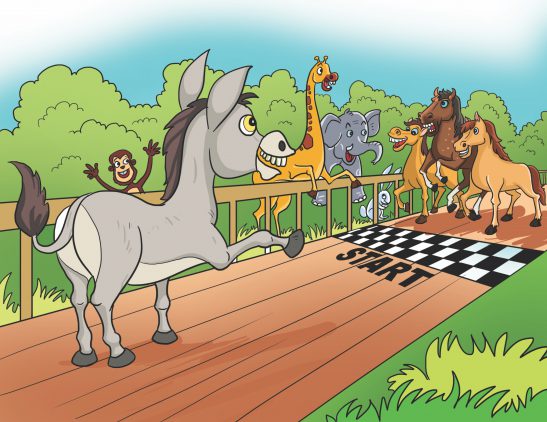 Till then, the same horses that looked at each other with bitterness, suddenly united.

They now turned their bitterness towards one target ― the donkey.

For now, it was not a question of which horse won. Rather, it became a matter of pride for the family of horses.

“This is beyond your skills, Bhondhu. Everyone isn’t as capable as us. Donkeys in particular are no match,” said Hiroo horse. “And if you were, you wouldn’t be called a donkey.”

Again, the crowd burst out laughing.

“You are just that ― a beast of burden,” continued the proud Hiroo. “Do what you are born to do. Don’t make a fool of yourself!”

The horses cheered him on.

“Okay. If I lose, I will leave this forest forever,” said a confident Bhondhu.

Now, this made the spectators curious. They all scrambled to get a better view of this strange competition between a donkey and the horses.

The referee fired the starting shot. Off went Bhondhu and the rest of the horses.

While the horses ran well, Bhondhu surprised all. He overtook each horse.

Even Hiroo, who was a champion racer, couldn’t beat Bhondhu. Finally, Bhondhu won! 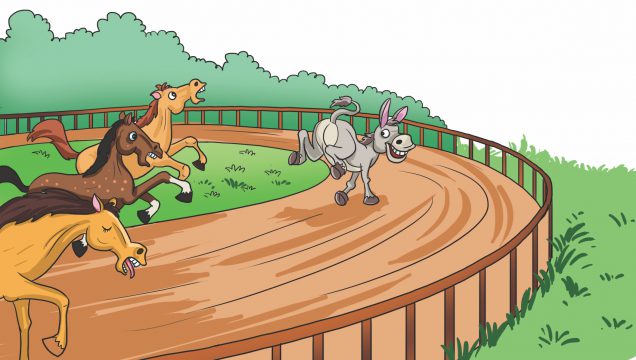 As a prize, he was gifted a cycle.

The happy Bhondhu went up to the horses and said, “Brothers, so what if I am a donkey? With hard work and sincerity, anyone can be successful.”

Soon, the race became the talk of the town. The animals made fun of the horses, while everyone stopped making fun of donkeys.

Bhondhu, however, was not happy with the situation.

“It’s nice to hear everyone praise donkeys, after I won the race. But it’s not fair to make fun of the horses either,” thought Bhondhu.

One day, Bhondhu was cycling in the jungle, when suddenly he was surrounded by a group of horses.

“So, you are the donkey that outran us. How about running a race with us, right now?” said one of the horses.

“The other day, it was an actual race. I have no intention of competing with you now,” said Bhondhu.

“Now, you insult us by saying that you are not in the mood to compete?” said a familiar voice.

It was Hiroo. He stepped up from behind and pushed Bhondhu off the bike.

Bhondhu realised that the horses were out to seek revenge. He quickly took off as the horses chased him.

While he could run fast, Bhondhu could not run continuously and was getting tired quickly.

While the horses, as they were used to running all their lives, did not tire easily.

Soon, dizzy and tired, Bhondhu tripped and fell into a pit. There he lay unconscious.

The horses stopped at the edge of the pit. Seeing him unconscious, they left. 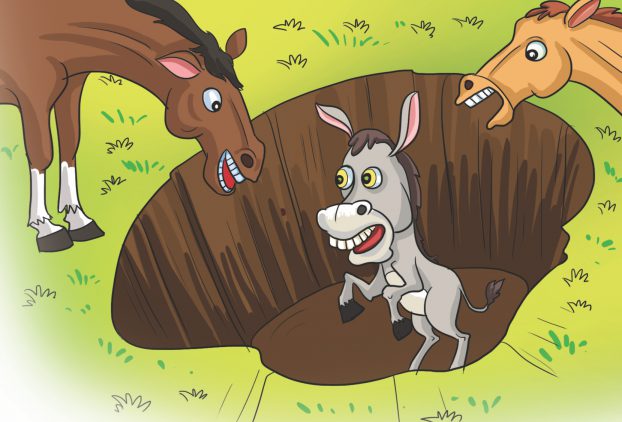 Soon after, Bhondhu gained consciousness and realised that he was badly hurt. He could not get out of the pit and there was no sign of help.

Suddenly, he spotted a small bird in the sky. It was Simi.

She recognised Bhondhu and flew down to him. Bhondhu told her all that had happened.

“The horses are bent on harassing me, because I won a competition against them. Is winning such a big mistake?” asked Bhondhu, in pain.

Simi smiled. “You have broken an age-old tradition. In doing that, you have made enemies with the bearers of that tradition,” said the wise little bird.

Simi explained, “All the animals think donkeys are stupid. However, horses are treated like kings. They are believed to be ‘high’ and you, ‘low’. By winning the race, you turned the tables. You proved that a ‘low’ animal is also capable of speed – a quality that horses take great pride in.”

She continued, “They are insulted and their pride is at stake. They will try to defeat you, not only on competition grounds, but in real life too.”

“You mean I have invited trouble and made enemies by challenging them in the competition?” asked Bhondhu.

“Bhondhu, those who hold a ‘higher’ place in the society, blindly believe they deserve respect,” said Simi. “They also believe that anyone from a ‘lower’ section cannot challenge or hold such a position. Nor can they snatch their honour at any cost.” 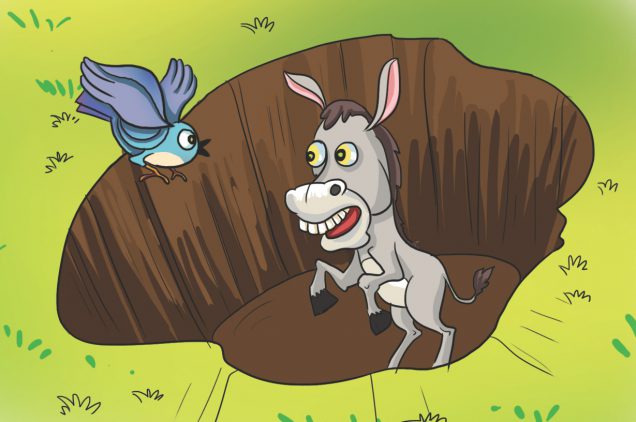 “I never thought about my actions in such a way,” said Bhondhu, worried.

“The winner of the race is now worried about his plight!” said Simi.

“Bhondhu, are you not happy that you have changed the outlook of your entire community? Wasn’t it wrong that everyone looked down upon donkeys? Now, because of your actions, no one laughs at a donkey.”

Bhondhu thought for a while. He replied, “No, dear Simi, I am in fact very happy, but…”

Simi stopped him mid-sentence and said, “If you are really happy, stop worrying. Instead, fight to retain your position so that in the future, no donkey will ever be discouraged. If you challenge someone, you need to be brave to face that person anywhere. Else, they will leave no leaf unturned to trouble you. Do you understand?”

“Yes Simi, I should be brave and ready to face the horses,” said Bhondhu courageously. “Now, can you please help me out of the pit?”

“I will get help.” Saying this, Simi flew nearby and got some of her friends to help Bhondhu to come out of the pit. Bhondhu thanked Simi.

“Dear friend, life is a struggle. To live it to the fullest, you have to be brave!” said Simi.

Bhondhu vowed to keep the pride of his breed and with that, they parted ways. 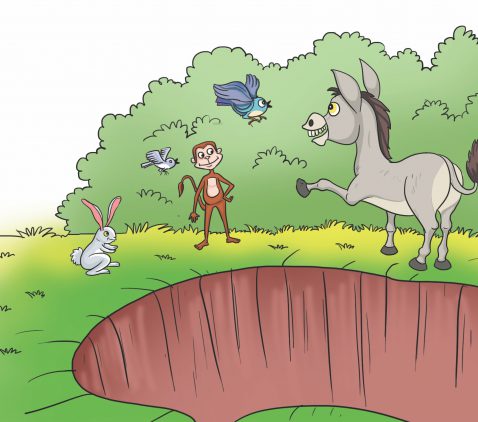 One thought on “An Unusual Race”