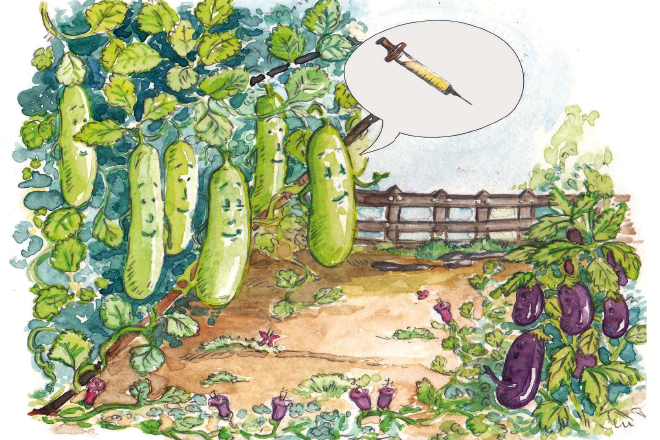 Harry, the fox had a farm in which he grew different kinds of vegetables and sold them at the market. Now, it was the season for bottle gourds. Since they were in high demand, Harry sold his big, peerless bottle gourds at the market for a handsome price.

Recently, some eggplants had sprouted from the patch nearby. They were in awe of the bottle gourds.

“Oh my! How beautiful you all look!” one of the eggplants complemented the bottle gourds.

“Thank you! We are indeed beautiful,” said the bottle gourds, admiring themselves.

“But how is it that some of you are unusually big?” asked another eggplant.

“There is nothing unusual about it. Our master gives us vitamin injections every day, early in the morning. They help us grow big and healthy,” said one of the bottle gourds, swinging in the air.

“Vitamin injections? Why? Are you unwell?” enquired the eggplants.

“No. Vitamin injections are given to make us more beautiful since master loves us the most,” replied the bottle gourds proudly.

The eggplants were jealous of the special treatment that the bottle gourds were getting. They wanted to see those vitamin injections and if possible, get some for themselves. They did not like the way they looked—dark and stubby.

The eggplants were taken by surprise. They did not expect to see Fanny so early in the morning. She usually came the farm later in the day to collect fresh vegetables for Dr. Giro, the giraffe at whose house she worked.

“No, no! We were just trying to find out what injection does our master Harry administer to the bottle gourds that makes them grow so big and beautiful,” said the eggplants embarrassedly.

“The bottle gourds said they are some vitamin injections that Harry gives them every morning,” replied the eggplants.

Fanny recalled that just the previous day she had made bottle gourd juice for Dr. Giro and he had sent it back saying it was too bitter. And many animals had come to Dr. Giro’s clinic complaining of food poisoning and the common food that all of them had eaten was bottle gourd.

“I think Harry has already given the bottle gourds the injections. See! There’s a bottle lying under their creepers,” said an eggplant.

Fanny checked the ground where the eggplant was pointing to and found a small bottle. She quickly pocketed the bottle and hurried home. As soon as she reached home, Fanny told Dr. Giro about the vitamin injections that Harry was giving the bottle gourds and handed over the bottle she had found in Harry’s farm.

Dr. Giro did some tests on the residue in the bottle. When the results came, his face turned serious.

“What is it, Sir? Is something wrong?” asked Fanny worried.

“Yes, Fanny. This is an oxytocin injection given to artificially boost the growth of vegetables. With this injection, the bottle gourds grow big and mature in just 3-4 days, so Harry is able to sell lots of them in a short span of time, and that too at a good price,” said Dr. Giro. “This is the reason that the animals have been falling sick after consuming the bottle gourds.”

“How does it harm our health, Sir?” asked Fanny.

“By consuming vegetables or fruits with oxytocin in them over a long period of time, our liver could get affected. This chemical can also cause the blood pressure to shoot up, leading to diseases of the heart,” explained Dr. Giro.

“Oh no! Harry is causing so much harm to all the animals just for his own greed. We must inform the police,” said Fanny. Next day, Chiro caught Harry red-handed while he was injecting the bottle gourds with oxytocin. The news of Harry’s arrest spread across the forest. All the animals were astonished that Harry had been injecting the vegetables in his farm with chemicals.

The bottle gourds too were surprised to learn about it and were ashamed of themselves. Meanwhile, the eggplants were relieved that they hadn’t been injected. They no more wished to change anything about themselves.