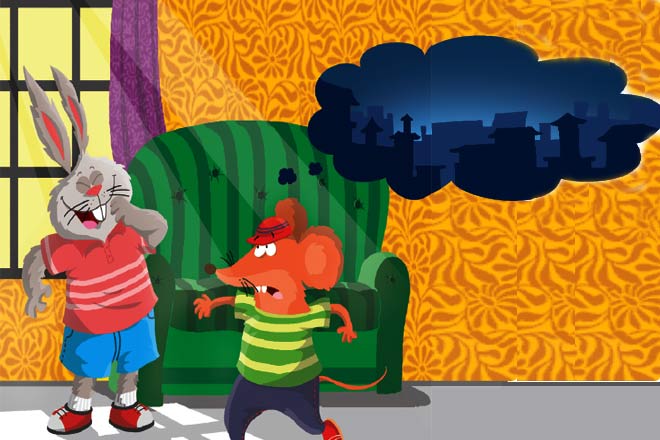 Hey, Chunchun, what happened? Is everything alright?” Meeku Rabbit asked in concern as Chunchun Mouse had come to meet him in the morning itself.

Chunchun replied, “Oh! Just came over to see you. Everybody is generally at home in the morning. That’s why I came so early.”

Meeku laughed, “You are right, but tell me what the matter is?”

Chunchun scratched his head, “I have been thinking for many days that the Sun has already completed one-third of its life. What will happen when it isn’t there anymore? Just think! The entire world will be submerged into darkness.”

Hearing Chunchun’s words, Meeku burst out laughing and his laughter continued for a long time. Then he told Chunchun, “Friend Chunchun, you made me laugh. I am laughing so heartily after many days.”

Chunchun said sheepishly, “Brother Meeku, what is there to laugh at? What wrong did I say? The Sun will really get destroyed one day, I swear!”

Meeku nodded his head, “You are right. I agree that the Sun has already completed one-third of its life and one day, it will complete the remaining two-thirds of life too and then it will be destroyed.” “Then why did you laugh on my words?” Chunchun got a little annoyed.

Meeku suppressed his laughter and said, “Chunchun, I will tell you. The Sun has been giving light to this Earth since 5 billion years and it is still going to be there for another 10 billion years. Now you should know that one year has 365 days and 100 years make one century.”

Chunchun couldn’t say any further. Meeku laughed again, “Why are you quiet? You forgot? After ten lakhs, its one crore, ten crores, one billion and then ten billions. Did you get it?”

Chunchun held his head. He said thoughtfully, “This is too much. I was unnecessarily worried.”

Meeku explained, “Correct, you got it right. Do you know that the Sun is the closest star to the Earth? Whatever energy we are using on this Earth is derived from the Sun. The interesting part is that the Sun is mainly fire, but it is a gaseous sphere. That means it is neither solid, nor liquid.”

Chunchun again scratched his head, “Oh! I wasn’t aware about it. I didn’t know that the chapati sized Sun was so interesting, really!”

Meeku said, “Chunchun, the Sun is not chapati sized, but gigantic! The radius of the Sun is an unimaginable 14,00,000 kilometers. Its huge size can be imagined by this fact that it takes 25 days to complete one circle around its own orbit.”

“Oh My God, this is really interesting, Brother Meeku.”

Meeku said, “However it is true that the Sun will be destroyed one day. The hydrogen present in the Sun is getting depleted with time and helium is getting formed in its place.”,

Chunchun asked, “Does that mean that the Earth will be in darkness?”

Meeku said, “I will tell you what will happen. After the entire hydrogen will be finished, the Sun will start expanding. It will become cold and turn into a huge red star. It will grow 250 times its size and swallow Mercury, Venus and our Earth. Then it will start shrinking. Then the Sun will become a white star. With time, though, it will lose its sheen and turn into a black sphere.” Chunchun’s eyes widened with horror. “Oh no! What will happen? How will we live then?”

Meeku began laughing, “Don’t worry about it now. I am sure humans would have found another Earth to live on by then. That’s what I believe.”

Chunchun began clapping and they both had a hearty laugh together.