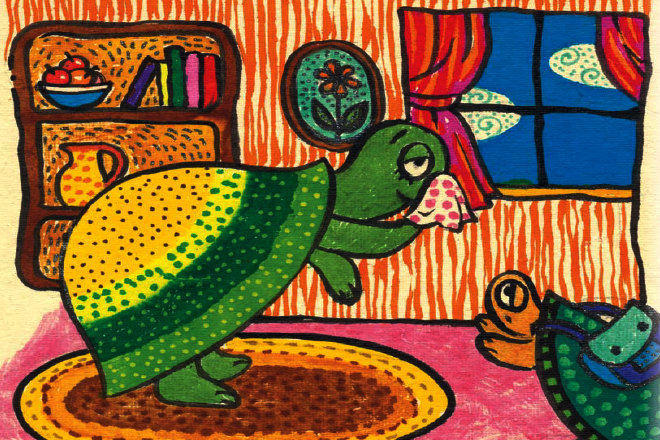 Tony was a naughty tortoise. He was well known in the forest of Sunshine Woods for his mischief.

“We receive so many complaints about your behaviour, Tony. When will you learn to be more responsible?” Tony’s father asked him, one day.

“Your teachers tell me that you are careless and don’t pay attention in school,” added his mother.

“I am sorry. I will try to be more responsible hereafter,” said Tony.

“Good. You can start trying right away. I am going out of town for a week. So, I want you to help your mother take care of the house,” said his father. Tony nodded his head.

A few days later, when Tony returned from school, he saw his mother sneezing continuously.

“What happened, Mom? Are you unwell?” asked Tony concerned.

“Yes, son. Since morning I have been feeling tired and slightly giddy, too,” his mother managed to reply between sneezes.

Tony helped his mother lie down on the bed.

He placed his hand on her forehead to check her temperature.

“Oh no! She is burning!” exclaimed Tony. He took out the thermometer from the first-aid box and checked her temperature.

“102 degrees! That is not good,” thought Tony. His mother was now shivering, too. So, he covered her with a blanket and wondered what to do.

Tony remembered the first-aid workshop that was organised in his school recently. Paramedic Giro, the giraffe had demonstrated what the kids could do in different situations like fainting and dehydration, till help arrived. For high fever, Giro showed the kids how a wet cloth could be placed on the person’s head, and advised them to change it every few minutes.

As demonstrated at the workshop, Tony folded a handkerchief into a long strip and dipped it in a bowl of water. He squeezed out the water and placed it on his mother’s forehead. He kept repeating it every few minutes for the next one hour. As the temperature dropped, his mother slowly drifted to sleep. Tony, too dozed off.

Tony woke up a couple of hours later to find his mother shivering again. He immediately placed the damp cloth over her forehead and ran out to get help.

Tony rushed to his neighbour Popo, the parrot’s house but it was locked. He then headed to Gus, the goat’s house. But Gus had gone on a vacation with his family.

“What do I do now? There is nobody here to help me,” Tony thought frantically. “I could call Papa, but it’ll be late by the time he gets here. Who else can I call who can reach here within minutes?”

That’s when Tony remembered that his mother had written down a list of numbers he could call in case of emergencies. The list was stuck on a wall in the living room. Tony ran back home and referred to the list. He called up the number for the 24×7 clinic.

“Hello! I am Tony, the tortoise speaking. My mother has high temperature and has been shivering on and off all night. I have kept a wet cloth on her forehead,” Tony said in one breath.

“Well done, Tony,” said a voice on the other end of the line. “Now calm down and tell me”

The line got cut. Tony tried the number again but he was unable to get through.

“What shall I do now? The line got cut before I could give them the address. How will they know where to come?” wondered Tony.

Tony then sat beside his mother and continued dipping the cloth in the water and placing it on his mother’s forehead.

In a short while, the doorbell rang. Tony opened the door wondering who it could be.

“Are you Tony—the one who called to inform that your mother is unwell?” asked a bear. There were also a couple of other animals with him.

“I am Dr. Bob. We are the emergency medical team from the 24×7 clinic that you called up,” said Dr. Bob.

Tony was surprised and relieved at the same time.

But how did you find out my address?” asked Tony.

“Tony, you are quite famous in our forest for your mischief. So, it was easy to find out where you live,” said Dr. Bob, winking at him. “Now, will you please take us to your mother?”’

Tony led Dr. Bob and his team to his mother. They checked her and diagnosed that she was down pneumonia. “You did a good job by keeping her temperature under control and calling us at the right time, Tony,” said Dr. Bob, patting him on his shoulder. “Her condition is not very critical. Yet, we need to take her to the hospital for treatment. She should recover in a couple of days.”

When Tony’s father heard about the incident. he appreciated Tony. “Well done, son. You have proven that you can be responsible when the situation arises,” he said.