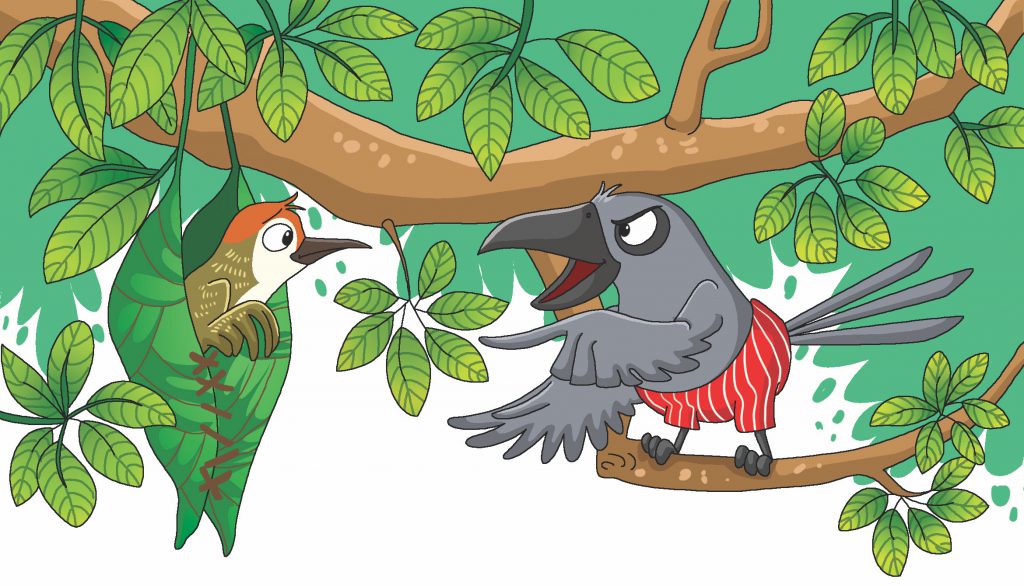 One day Toto, a tailor bird, thought of building a nest for herself. She flew around and found a garden on the banks of a river in Champakvan forest. She was delighted to see a variety of plants and trees and animals and birds in the garden.

Toto made introductions with the residents of the garden and thought, “This place is beautiful. I should make my nest here.”

Toto chose a large tree and started to build her nest on it.

She finished stitching half of her nest in no time.

Kallu crow who also stayed on the same tree saw her nest and thought, “Her nest is so artistic and mine looks shabby in front of hers. Anyone who sees our nests, will only praise hers.”

Kallu flew over to her and started to caw mockingly.

“Why are you cawing?” asked Toto.

“Why wouldn’t I?” replied Kallu. “You are working so hard to build a nest on a tree that is not safe at all!” he continued.

“Why do you say that the tree is not safe?” asked Toto.

“This tree is home to many predatory birds who keep coming here,” said Kallu.

“But your nest is here too?” she pointed. 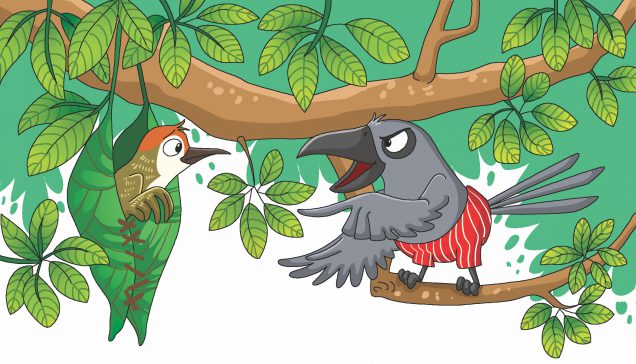 She looked around and saw a mango tree and started to weave a nest on it. While she was still stitching her nest Kutty cuckoo visited her and said mockingly, “O Toto, you are being so stupid!”

“Why do you say that?” asked Toto.

“This river floods whenever it rains heavily and the nest will get washed away into the river when that happens,” Kutty explained. Toto looked at the rapid river flowing near the tree.

“Look, even I haven’t made my nest. I just hide among the leaves of the mango tree and spend my days here,” said Kutty.

The fear of getting carried away by the flood waters, Toto gave up her unfinished nest and started looking again for a new place.

She saw a cluster of shrubs nearby and decided to build her nest on a nice shrub. As she was weaving her nest, Jumpy monkey came and started looking at her nest in amazement. “What are you looking at?” asked Toto.

“I am observing how hard you are working to build your nest by bringing twigs over one by one and then weaving them into your nest. But, did you check whether the timing was auspicious to do so? You started building your nest at a time which is not lucky,” said Jumpy. His words scared Toto.

“I am a priest; I can tell you the right time to build your nest and can perform the necessary pujas too,” he offered. 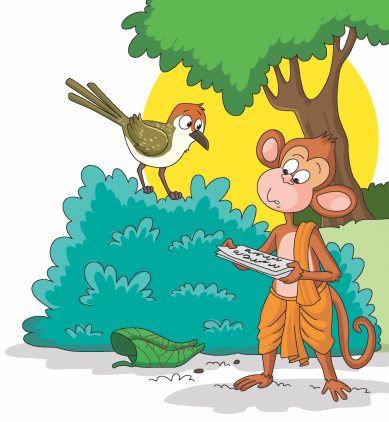 Toto was swayed by Jumpy and she broke her nest in the fear of it being unlucky for her and requested, “Jumpy, please tell me the correct time to build my nest.”

Jumpy took out a thick book from his bag and picked out an auspicious time
for Toto and took his fees and left from there.

When the time was right, Toto performed the required rituals and then started to build her nest.

Cheeku rabbit, who stayed nearby, had been observing Toto since morning. He had seen her destroy her nest at Kallu and Kutty’s insistence.

It was the third time when Toto had broken her nest in the shrubs after being fooled by Jumpy’s words. Cheeku felt sorry for her.

He went to her and said, “You have been trying to build a nest but you leave it unfinished because of what others say.”

Toto looked at Cheeku with tears in her eyes.

“You look tired. Come to my house for the night and take rest. Then start building your nest tomorrow morning,” offered Cheeku, kindly.

“But then the auspicious time for building the nest will be gone,” she said worriedly.

“All this is nonsense! Jumpy fooled you but that’s his business,” Cheeku explained.

Toto was exhausted after repeated attempts at building her nest and had no energy to build a new one. She was extremely hungry too.

She thanked Cheeku for his offer and went with him to his house. Cheeku served her food that she ate to her heart’s content.

“You are sincere and hard working. And you are skilled at making nests.”

“But…?” asked the Toto looking at Cheeku questioningly.

“You don’t believe in yourself. Anyone who doesn’t have faith in themselves gets easily swayed by other people’s opinions. Not having self-belief makes us think that we cannot finish anything successfully. A person who believes in herself can do things even before starting a project,” explained Cheeku. 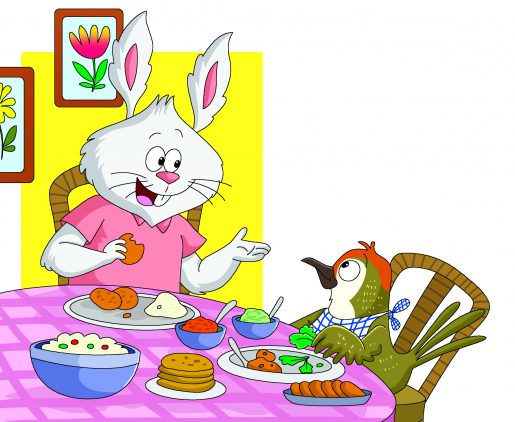 He further added, “You listened to Kallu when he scared you of predatory birds, but the truth was that he was jealous of your beautiful nest. When Kutty told you that your nest will be destroyed by the floods, she said so because she too was jealous of your nest-building skills as she has never built a nest in her life. Later you got carried away by Jumpy’s words of superstition. If you had kept faith in yourself, your nest would have been ready by now and you wouldn’t have to
go through so much trouble.”

Toto understood what Cheeku was saying.

Next morning, she woke up early and built her nest with self-confidence. Her nest was ready in a hours and she hosted a party.

She did not forget to invite Kallu crow, Kutty cuckoo and Jumpy monkey for the feast. After all, they too had made her realise her shortcomings!