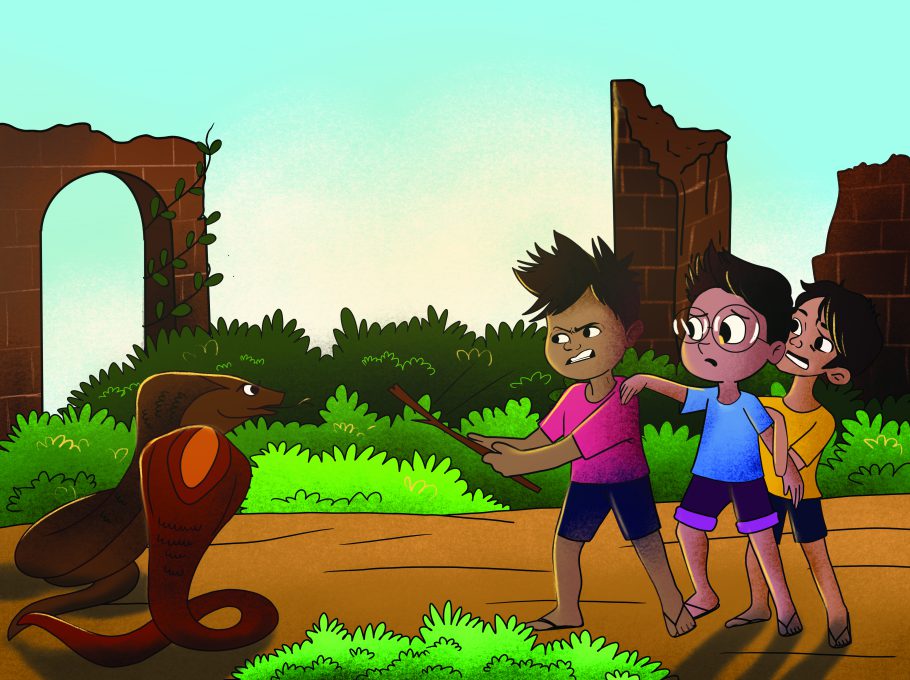 “Karan! Catch your breath first? Now, tell me, what it is?” said Yash, resting his bat on his shoulder.

“About three kilometres from here flows Ratna River. On its shore, there is an old house with a well.”

“What’s special about that?” asked Yash.

“Oh, Yash! Don’t you know? The British have hidden a truckload of treasure inside that well.”

“How do you know there’s treasure inside the well?”

“My grandpa told me that during the revolt of 1857, the British government had hidden its treasure in that well so that the revolutionaries would not lay their hands on it. The British were killed during the revolt, but the treasure is still inside the well. No one has found it till now.”

Yash thought for a while, and then said, “Karan! The treasure in the well can be ours! We’ll do what no one has done!” 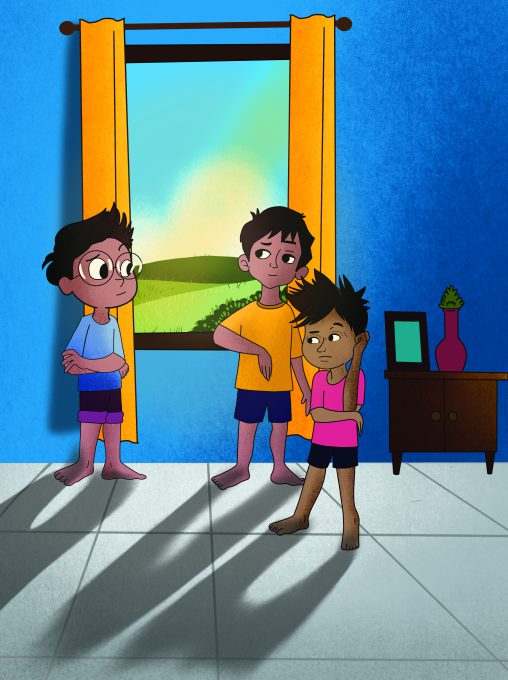 Yash and Karan talked and walked towards their closest friend, Mohan who had an analytical way of thinking.

Mohan loved reading detective stories and had learnt about being a detective through them.

He listened to his friends attentively, and then said seriously, “Hmm! A treasure in the well! We will find it, no matter how hard it is.”

The three of them started drawing up a plan and decided to go on Sunday to find the treasure. They also agreed to collect things that they would need to draw out the treasure.

They collected large bags to put the treasure once they got it, and sticks with pointed ends like spears to fight off any danger they may face. They took a large rope for getting inside the well, and a pickaxe for digging.

On Sunday morning, the three friends set off on their treasure hunt fully prepared.

Their first obstacle was the way to cross the Ratna river. Though the river did not seem to have a lot of water, they didn’t know its depth. They took off their clothes and shoes and put them in a plastic bag.

They used their sticks to measure the depth of the river and started walking across it slowly. They walked through the parts where the water was shallow and avoided the deeper pockets.

They had almost reached the shore when Yash screamed. “Ouch! Ouch!” and jumped and rushed towards the land. Mohan and Karan got scared and followed Yash quickly.

When they reached the land, they found Yash stamping on the ground. They saw that two leeches were attached to Yash’s legs and they had become swollen sucking his blood. Yash tried shaking them off, but could not. He was screaming now.

Hearing the screams, a farmer working in a field near the river came running. He saw Yash stamping and understood what had happened.

He immediately pulled out a small bottle that had white powder from his pocket and sprinkled some on the leeches and they came off Yash’s legs at once. 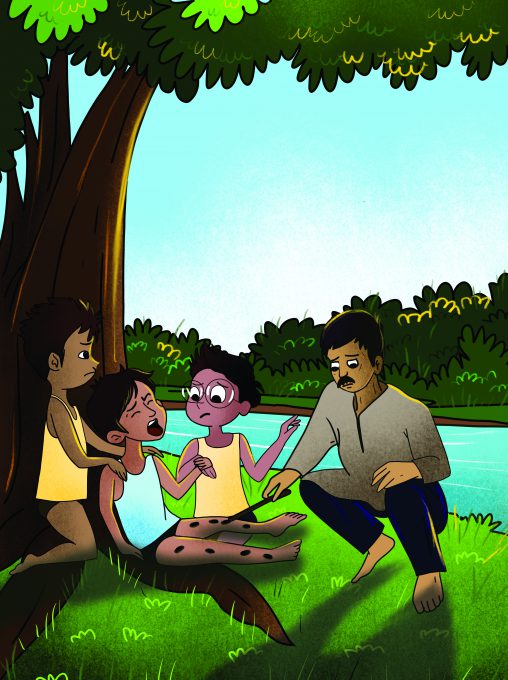 “There are a lot of leeches in this river,” explained the farmer. “We bring our cattle to bathe here and they stick to their legs too. The only way to get rid of leeches is to sprinkle salt on them. That’s why I carry a bottle of salt with me!”

Yash thanked the farmer, and the three friends began walking towards the old house. They had just crossed a field when they heard a buzzing noise. A swarm of bees were coming towards them!

Yash and Karan turned around to run but Mohan yelled, “Put the treasure bags over you!”

The three friends immediately put the empty bags over them. Through the bags, they could hear the bees buzzing and were scared they would get stung. But luckily, the bees flew away and the three friends removed their bags, looked at each other and laughed in relief.

“We didn’t expect our hunt to be full of dangers!” exclaimed Yash.

“Yes, of course! We’ll find that hidden treasure!” answered Mohan, and the three of them marched ahead.

They soon reached the old house that looked like a ghost house. Trees and bushes had grown through its walls. The windows were broken and covered with cobwebs and looked dark and scary.

But even more scary was the snake in front of the house! Soon, a second snake joined it and the children recognised them as poisonous snakes. 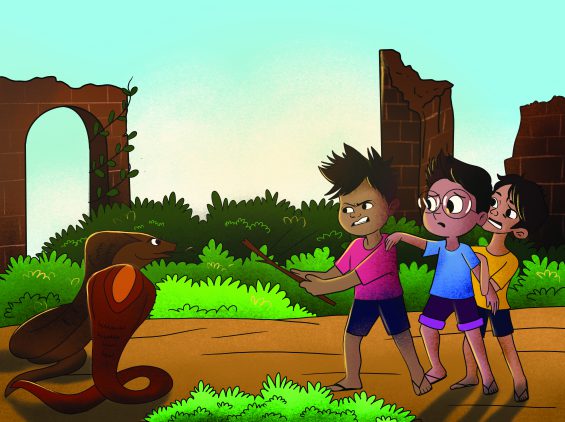 Karan was about to hit the snakes using his pointed stick, but Mohan caught his hand and said, “Don’t hurt them!” he whispered. “Stand still and they’ll go away.”

Sure enough, soon the snakes slithered away.

“You see Karan, snakes are shy. They don’t attack till they feel threatened.

If you had hurt them, they would have attacked us,” explained Mohan.

The three friends then tiptoed through the grounds and finally saw the well. But just before they could go near the well, they heard a rustling noise! Was that some wild animal that would attack them?

They took a step back and looked inside and saw two rabbits running away!

With a sigh of relief, the three went closer to the well and looked inside. It was deep. Plants and weeds had grown along its walls. They could not see the bottom. One of them would have to climb down to get the treasure!

“Mohan, you are the thinnest. You should climb down!” said Karan. Yash is heavy and we will not be able to pull him out.”

Yash laughed but was secretly happy that his weight had saved him from climbing down. He did not want to get stuck inside the well! Mohan tied one end of the rope to a tree trunk and tied the other end to his waist.

Once I reach the bottom, I’ll find the treasure and put it in the bags. Then I’ll shout so that you can pull me up.”

Mohan balanced himself along the side of the well and slowly started climbing down easily. When he reached the bottom, he looked all around for the treasure that was not there.

Instead of the gold coins, he was expecting, he saw a scared white baby rabbit that tried to hide when Mohan reached to pat it. 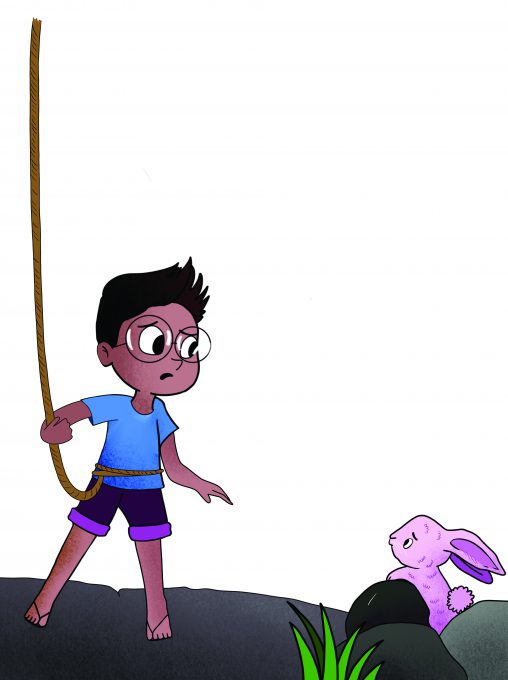 Mohan realised that the baby rabbit must have fallen into the well. The two rabbits that scurried when they had reached the well must have been her parents.

Thankfully, there was no water in the well, otherwise, the baby would have drowned.

Mohan carefully picked up the rabbit and put her in his bag. He used his pickaxe to make some holes in the bag for her to breathe. He took the bag on his back and tied the pickaxe to the rope. Then he called Yash and Karan to pull him. Yash and Karan were thrilled because they thought that Mohan had found the treasure. They started pulling the rope with all their might. Mohan, too, started carefully climbing upwards.

When he reached the top, Yash caught Mohan’s hand and pulled him out.

They were all exhausted and lay flat on the grass for some time.

Then Yash could not hold himself and picked up the bag Mohan had dropped on the ground and opened it. He wanted to see what was the treasure they had found!

But the treasure inside the bag was scared of Yash and started jumping. Yash dropped the bag in fear and Mohan took the rabbit out of the bag and told them that this was the only treasure he found inside the well.

Karan said, “Mohan, you are kind. I wish everyone was as kind as you are. So many animals can be saved by our small acts of kindness.” 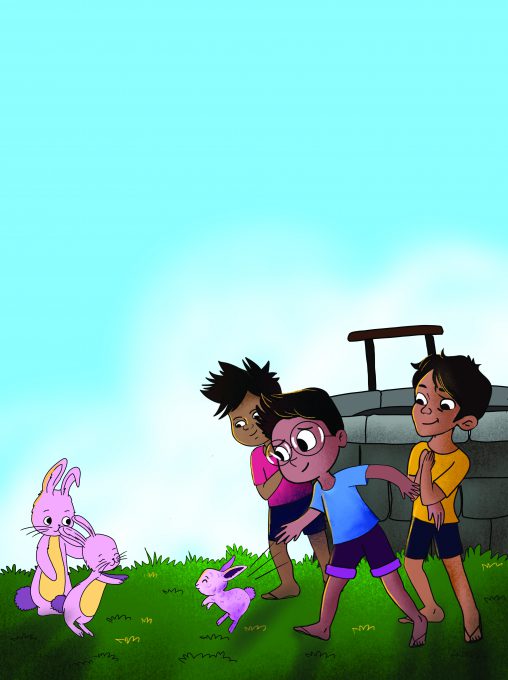 Just then, they saw the rabbits coming back looking for their young one. Mohan released the baby rabbit in the direction of her parents. The rabbits were overjoyed upon being reunited. The three friends were also overjoyed—the treasure they found was a unique one.