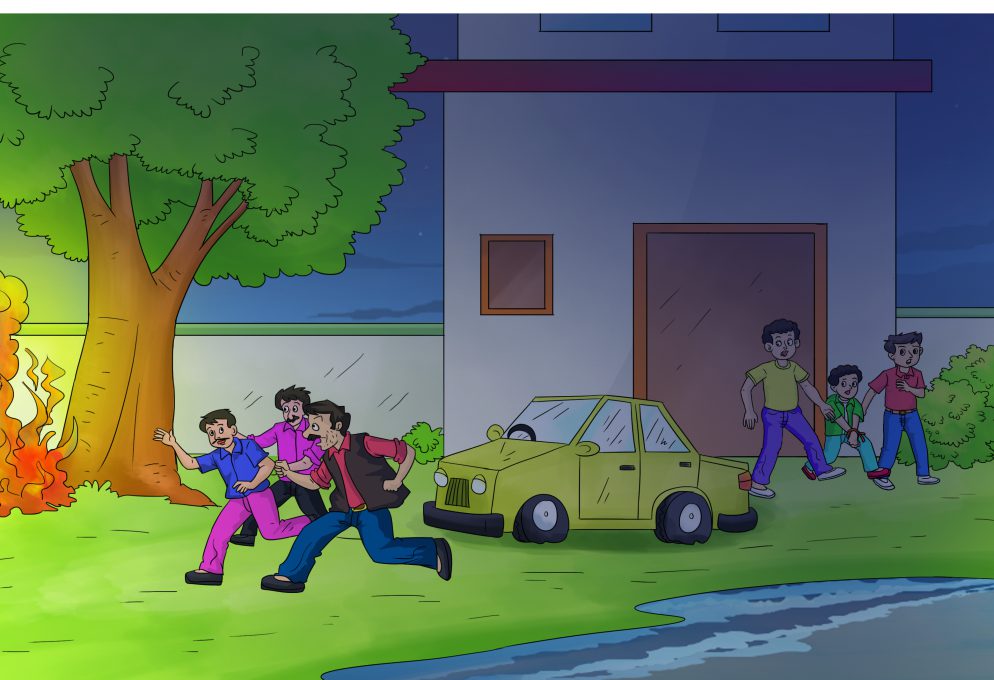 Raj stepped out of his house, swinging his cricket bat and placing a cap on his head, dashed to his friend, Vineet’s house.

As soon as he rung the doorbell, the door was immediately opened by Vineet.

“Hey, I was just waiting for you. Let’s go,” Vineet said excitedly tossing the cricket ball up in the air.

Laughing, both of them headed to the ground.

They took their positions and started to play.

At one point, Raj hit the ball so hard that it went flying through the air. 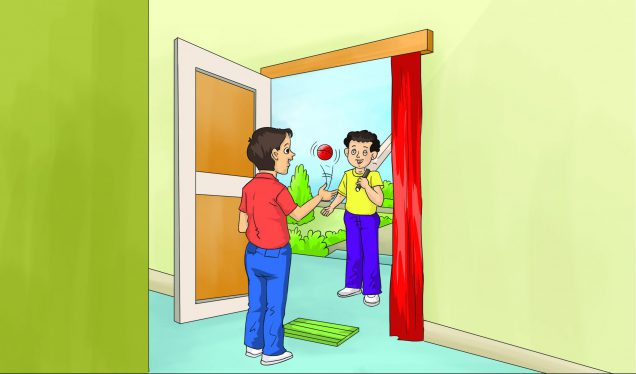 Raj grinned and said, “Thanks. How about going and getting the ball now?”

“Very smart.” Vineet made a face and left.

Vineet looked for the ball but was unable to find it.

Puzzled, he wondered where the ball could have fallen.

Then he looked at the huge building next to the ground where construction work had stopped and hesitated.

From the ground, one could see the back of the building.

Vineet wondered whether the ball could have gone through one of the back windows.

He decided to go inside the building and find the ball. As he entered the building, a man with a gruff voice came out from inside it and ordered him to stay out.

“Uh…I wanted to come and find my ball that may have fallen in through
the back windows of the building,” Vineet explained. 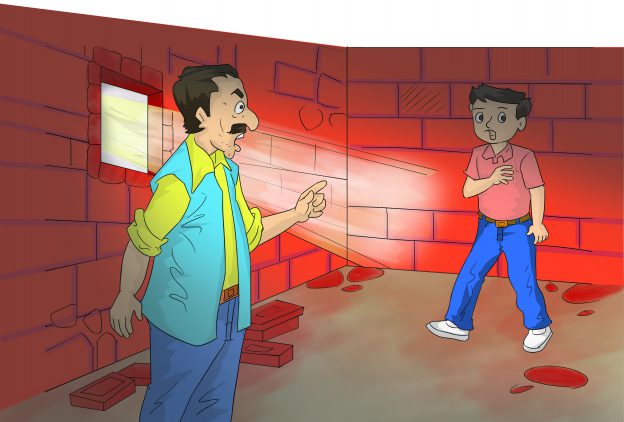 Glowering, the man barked, “Go away.”

Vineet got scared and turned away reluctantly.

He wondered who that man was and why he looked so angry.

Vineet walked away and then looked back.

He saw the man was shouting at someone on his mobile phone, looking very tense.

Vineet hid around the corner and waited patiently.

After a few minutes, the man disconnected the phone. With his eyes on the road, the man started walking to and fro, as if waiting for someone to come.

The area around the building was deserted. Suddenly Vineet saw an old beat-up car come in speedily and brake near the gate of the building.

From inside it, three men jumped out, dragging a bound and gagged boy who looked as old as Vineet.

The four men then dashed inside the building with the boy. 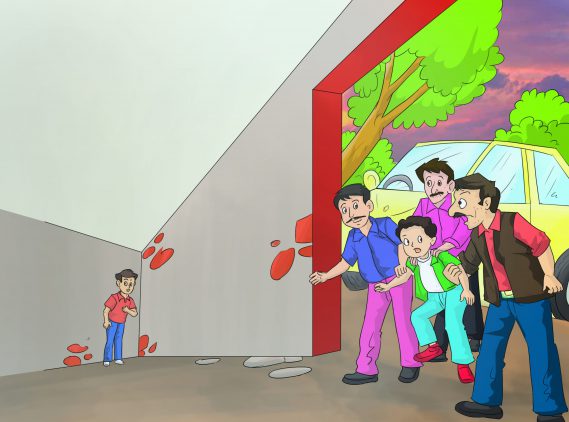 Wide-eyed and horrified, Vineet realised that this was a scene right out of a movie. The only difference being that this was no movie but real life.

Suddenly, he felt a hand on his shoulder. Scared and ready to scream, he turned around. To his relief, he saw Raj and Vineet felt himself go weak at the knees.

“Gosh, you scared me!” Vineet gushed.

“Let’s get out of here,” Raj whispered.

Soundlessly, the boys ran away from there and went to Vineet’s house. In his room, they discussed what they had seen.

Raj too had seen the men drag the boy inside the building and they knew the boy had been kidnapped.

It was decided that Raj would get permission to sleep over at Vineet’s house that night so they help the kidnapped boy.

After everyone had gone to sleep, the boys crept out and walked towards the building site. Both were wearing black clothes and carried backpacks. They paused near the corner of the building and looked around.

Finding the lot empty, they went towards the front. Apart from a scarecrow tied to a pole on the first floor to ward off evil, there was no one around.

They bravely tiptoed their way in. As they went in, they could hear faint sounds of laughter coming from the far end of the building.

Cautiously, the boys reached the end and peeped inside a room there.

The four men were playing cards and cracking jokes. Next to them on a chair, the boy was gagged and tied to it.

Without making a noise, and placing his phone on silent, Raj took several snaps
of the kidnappers and the boy on his mobile phone.

Asking for help, he forwarded the photos and their location to the local police station number that he had saved on his phone earlier in the evening.

Just as the boys were feeling relaxed, one of the men asked, “Is the car ready, Dev? We have to leave from here in half an hour.”

The boys were shocked to hear this as they hadn’t expected the men to leave.

Raj’s mind raced and then his face brightened.

He whispered, “Go and deflate one of the tyres of the car. And wait there for me.”

Vineet nodded and dashed off.

Raj soundlessly made his way up the steps to the first floor. He reached the edge of the building and untied the scarecrow.

Grabbing it, he went downstairs and flattened it against a tree. 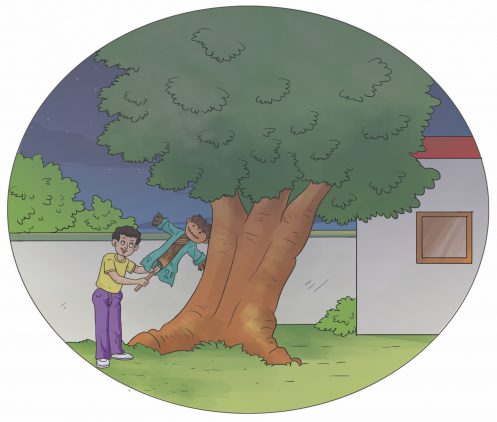 Then going up to Vineet, Raj signalled him to follow him to the bushes and wait for the kidnappers to come out.

They came out of the building after some time, pulling the boy with them.

As they neared the car, Dev exclaimed, “Oh no! We have a flat tyre!”

The boss roared, “You idiot! You said the car was ready. Change the tyre immediately.”

While they all waited impatiently, Raj lit the trail of kerosene which caught fire and soon the scarecrow was also on fire.

Horrified, the boy forgotten, the men ran towards the scarecrow.

Taking this opportunity, Vineet and Raj came out of their hiding place and took the boy to their hiding spot. They quickly freed him.

When the men realised the boy was missing, they started shouting at each other.

Just at that moment, with sirens blaring, the police arrived and captured the men.

Raj and Vineet came out of their hiding place and took the boy to the police who then called the boy’s parents.

The police praised Vineet and Raj but also told them that next time, instead of capturing the kidnappers themselves, they should immediately alert the police and their parents.

Both boys nodded at that because they realised they could have risked their and the kidnapped boy’s lives in trying to save him by themselves. 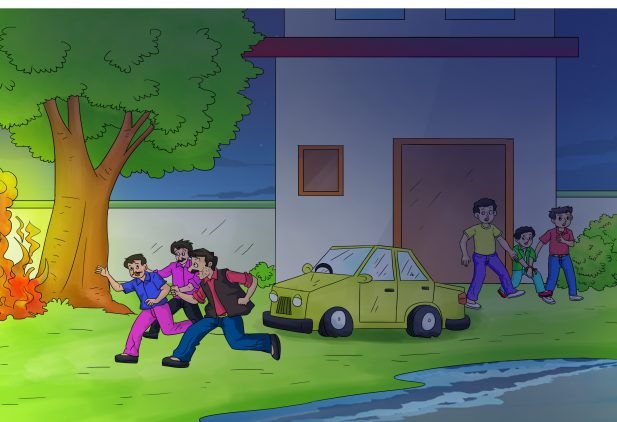