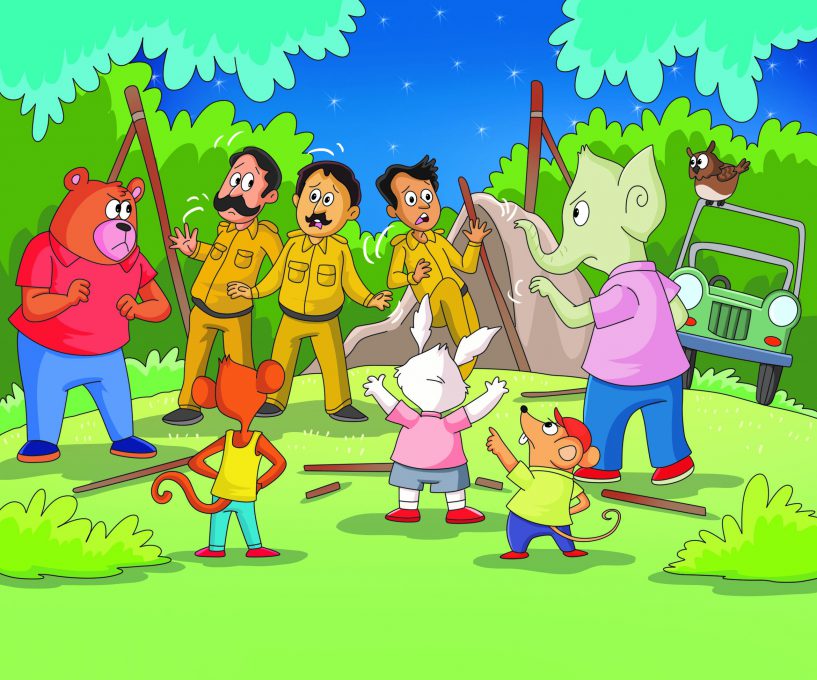 Putru owl lived in Champakvan forest. One night, he set out to look for food and saw a tent on the outskirts of the forest. A jeep was parked beside it.

“These weren’t here before!” muttered Putru. Before sunrise, he woke everyone and told them about the jeep and the tent.

Blacky bear had interacted with humans before when he was in a circus and had then escaped to the forest. He quietly went to the tent and peeked inside to see guns, axes and a few men sleeping inside. He immediately understood why they had come.

“They are here to cut down trees of the forest,” said Blacky.

Everyone was shocked. If the trees were cut down, there would be no forest for them to live in.

“You used to say that humans are clever creatures. Do they not know that cutting down trees will bring harm to them as well? Trees make up the forests, give us our homes, and bring rainfall. Trees hold the soil together and also clean the air,” said Cheeku rabbit. 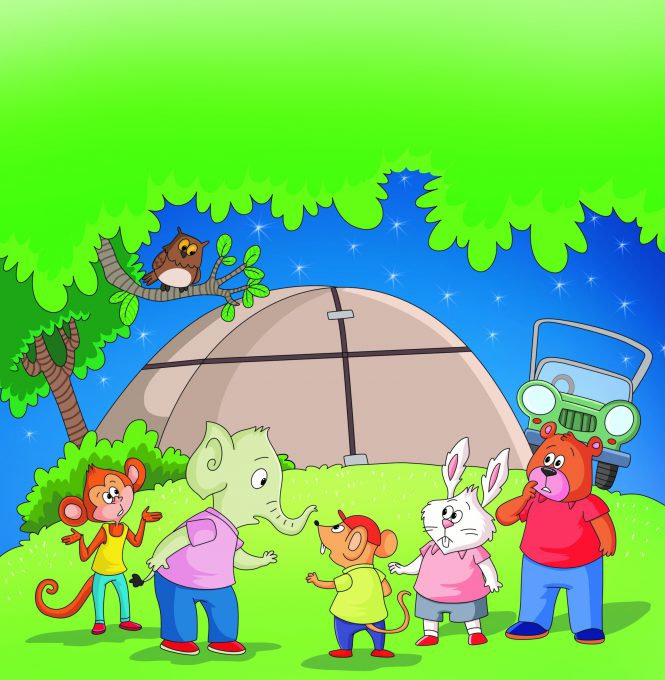 “That’s not all. Trees provide food, medicines and many other things,” said Jumpy monkey.

“But today, humans are being short-sighted. They want to cut down the trees for wood to make homes, furniture and paper,” said Blacky.

“We won’t let them cut the trees!” said Jumbo elephant, angrily. “But they have guns. They can kill us!” said Blacky.

“We must be brave but careful. Let us make a plan to save our forest,” said Jumpy.

“Yes, we must do something quickly! Once they wake up, they may start cutting the trees!” said Jumbo.

Meanwhile, Cheeku had come up with a plan. “If we take those guns and axes, the humans will not be able to bring any harm to us or to the trees,” voiced Cheeku.

They all agreed with his plan and started acting accordingly. Meeku called the mice family to use their razor-sharp teeth to make holes in the tent. Jumpy and Monty entered the tent through the holes and took the guns and the axes, and gave them to Blacky who was standing outside.

Jumbo picked the axes and guns with his trunk and dropped them into the river. “Our trees are safe now. We must scare the humans so that they don’t come here again,” said Cheeku.

All the animals surrounded the tent and started making scary noises. The men sleeping inside woke up with a start.

“Animals have surrounded us. Quick, get the guns!” shouted their chief.

“But there are no guns here! Did we leave them in the jeep?” asked another. “I brought them inside the tent myself!” said the third.

“The axes are gone too! What’s going on?” said their chief.

Jumbo pulled the tent from the ground and now the frightened men were surrounded by animals.

Upon receiving a signal from Jumpy, all the animals started moving towards them.

The men didn’t wait anymore. They ran into their jeep and drove away, promising never to return to the forest.

Blacky said, “We stood with each other bravely and defeated those who were stronger than us. We prevented our forest from getting destroyed. I am proud of us all.”

“If anyone ever comes back here with bad intentions, we will drive them away again, together,” said Jumpy.

All the animals then celebrated their victory that day.