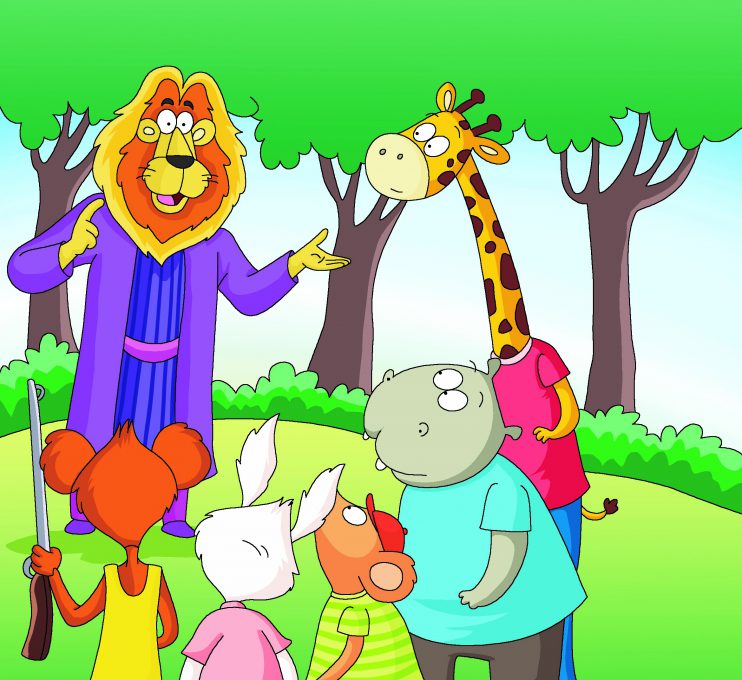 Champakvan forest was quiet and peaceful. The animals and birds lived happily. They shared and helped each other in times of need.

A few days ago, a group of hunters came inside the forest and started hunting birds and animals, using guns. The animals were scared and cried over the loss of their friends. The fear of being hunted down troubled them the most.

They all decided to go and meet the king of the forest, Shersingh. King Shersingh heard them patiently and said, “I too am worried about your safety. But these hunters are armed with guns. Even I am afraid of guns. We will have to find a way to fight these hunters,” said Shersingh. 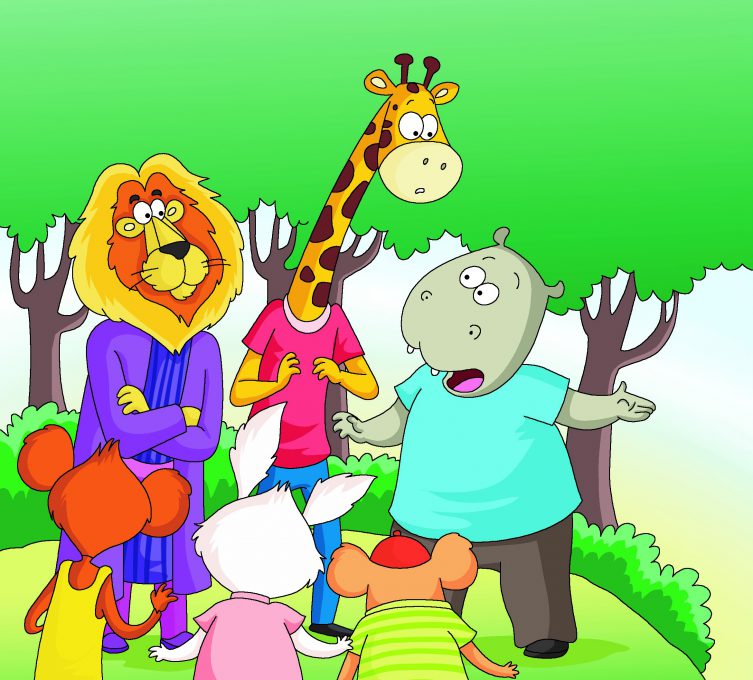 Honey hippo who was listening quietly said, “Your Majesty, I have a plan that can drive the hunters away from the forest.”

“What is you plan Honey?” asked Shersingh “Your Majesty, we must all stand together and fight these hunters. We must show – Unity is Strength,’’ said Honey.

“But even if we stand united, we can’t fight them. They have guns to shoot us,” said Lamboo giraffe.

“I know. We must plan cleverly before we act. My thick skin makes it difficult for the bullet difficult to pierce through it. I will go towards the hunters and distract them by walking towards them and the rest of you can attack from behind,” said Honey.

“If I get hurt, Dr Damru needs to be there to quickly remove the bullet from my body,” said Honey.

“You are putting your life at risk. Let us hope we don’t fail you,” said king Shersingh.

As planned, the next day, the crow took up the duty of a spy. He found out the camping spot of the hunters and passed the message to king Shersingh. All the animals hid in different places as planned by Honey.

Lamboo giraffe hid behind a tree, Fatty elephant hid behind a cluster of tall trees and Jumpy hid behind the bunch of bushy leaves. Cheeku rabbit took cover inside a bush. His Majesty, King Shersingh concealed himself behind a big mound.

The hunters were walking with guns in their hands. They looked alert and ready to shoot at the slightest sound.

As planned, Honey came before the hunters, then turned back and started running in the direction of his friend’s hiding places.

The hunters chased Honey, but Honey quickly gave them an escape and hid between the tall grasses.

One of the hunters reached the mound, where king Shersingh was hiding. As he climbed onto the mound to take a better look, his gaze fell on Shersingh. A chill ran down his spine. He dropped the gun and fell down rolling over the mound. The hunter managed to run away. Seeing the plight of the hunter, King Shersingh could not control his laughter. 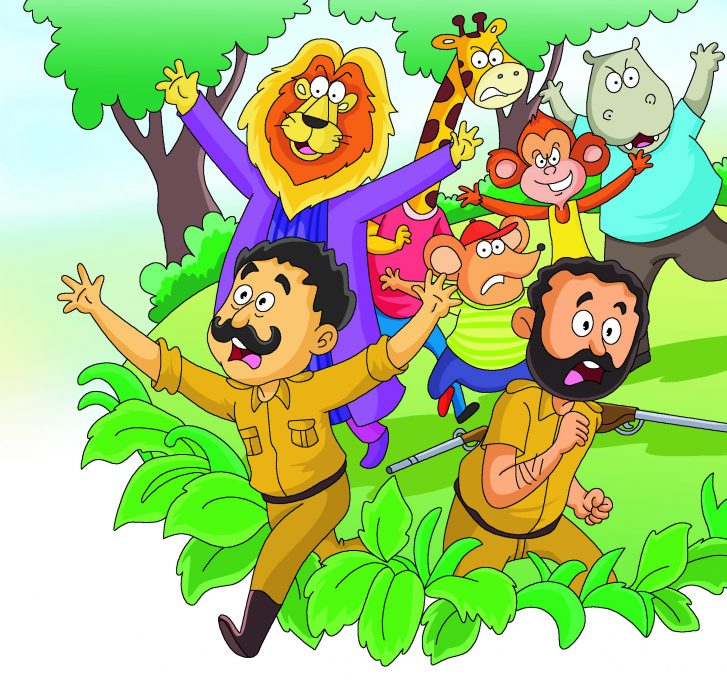 The other hunters too were shaken when they saw their friend running. Taking charge of the situation, all the animals came out of their hiding places and attacked the hunters. In the chaos that followed, the hunters dropped their guns and ran away. The animals chased them out of the forest.

When the animals returned back to the forest, they saw the guns lying there on the ground. Jumpy collected all the guns and started imitating the hunters. He held a gun in his hands and by mistake pulled the trigger. The animals were in for a shock when they heard the sound of the gun shot. King Shersingh hid himself in a pit.

All the animals started laughing when they found out the reason behind the gun shot. Lamboo said, “We too have guns to fight now and need not be afraid of anyone.”

But Shersingh was lost in his thoughts. He thought about what could have happened if Jumpy had shot anyone.

He said, “We don’t need these guns that take the lives of others. I don’t want any of us to be killed by a gun shot. Let’s not create a situation where someone thinks they are more powerful because they have a gun. It’s better to dump them in the lake.”

Everyone agreed with Shersingh and they collected and threw the guns deep into the lake.