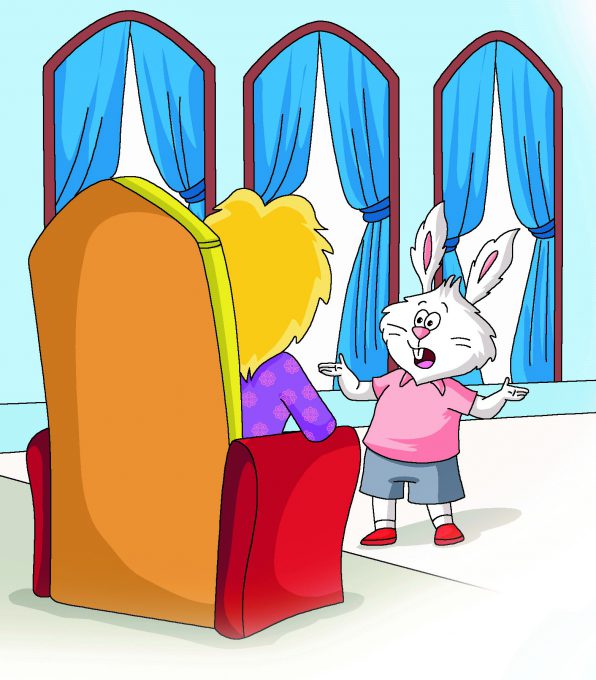 Shersingh lion was the king of Champakan. He tried to do the best for the animals of the jungle, who were very happy with their king. Whenever someone had difficulty, they would go to King Shersingh, who would listen patiently and solve their problem.

Blacky bear was the Health Minister of Champakvan. He was proud and did not talk nicely to others. He did not respect anyone and felt that all the other animals were inferior to him. Baddy fox, Jumpy monkey and Kimi koel would flatter him and say things to please him. They did whatever Blacky asked, and in return, took benefit of his being a minister.

One evening, Blacky, dressed in fine clothes, with perfume on him, went for a walk by the riverside. There he saw Henko hyena with others, taking things out of a garbage dump and eating them, even though there was a foul smell coming from the garbage. 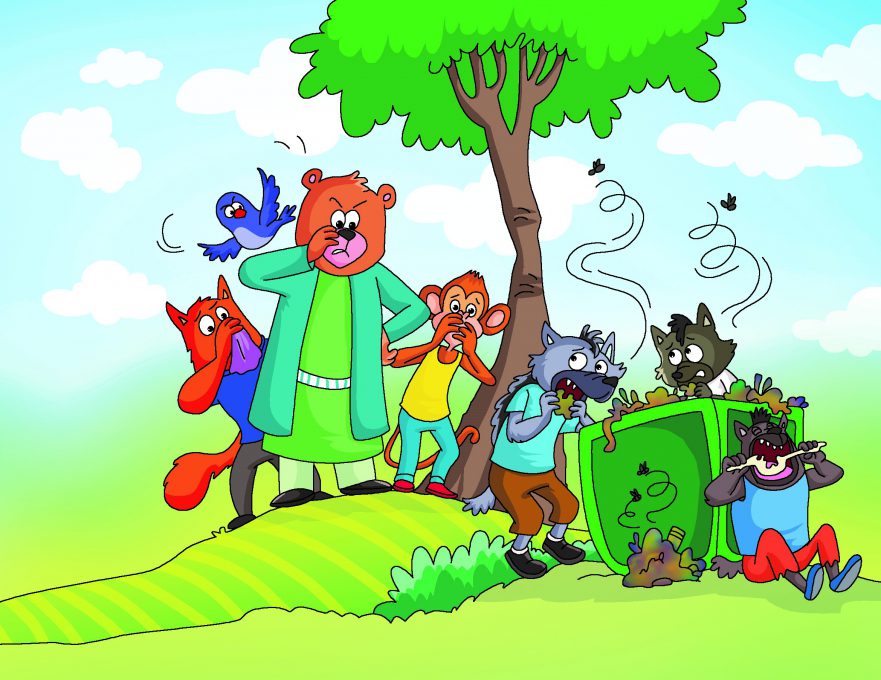 Seeing Blacky, Henko greeted him but proud Blacky did not return the greeting.

“What awful stench!” said Jumpy monkey, covering his nose with a handkerchief.

“Because of this stench, fragrance of the expensive perfume that Blacky sir sprayed on him is no longer there.”

“I hate to look at his ugly face,” said Kimi koel pointing at Henko. “I wonder how they can eat filthy!”

“Such ugly creatures in our beautiful Champakvan! These dirty animals spread filth, ugliness and diseases in our forest,” said Baddy fox.

“They are blemishes in our beautiful Champakvan,” said Jumpy monkey.

“How can they do this in front of our honourable minister! Look how they are chewing and enjoying the bones,” said Baddy looking at Henko and then pointing him to Blacky.

“You are right,” said Blacky. “These low-class animals are a disgrace to our society. They have no right to live in Champakvan.”

Covering his nose with his hands, Blacky went to Henko hyena and said, “You all must immediately leave Champakvan!”

“Your Highness, why should we leave? What have we done?” asked Henko
in astonishment.

“You all are ugly and live in filth. You eat dirty things and because of you, disease will spread in Champakvan. If you do not leave immediately, you will be punished,” said Blacky arrogantly.

Henko had no choice and left Champakvan with his companions.

But in a few days, diseases started spreading in Champakvan. One after the other, everyone started falling sick. There was confusion everywhere. There was hardly a family that did not have a sick member in the house.

When King Shersingh came to know that the residents of his kingdom were falling sick, he became concerned and asked the medical teams to immediately treat the sick. But animals continued to fall sick. There seemed to be no end. The sickness became an epidemic. 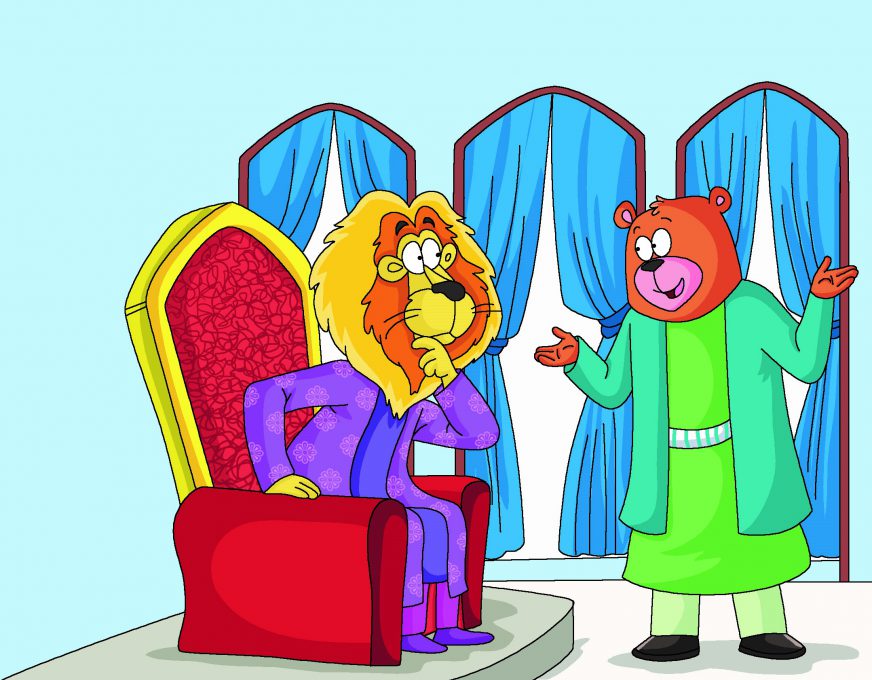 “Sir, we should leave Champakvan and start living in another forest. The epidemic cannot be controlled by our medical team,” advised Blacky.

“But we cannot abandon our animals in this condition and run away!” said
King Shersingh.

The wise Cheeku rabbit also lived in Champakvan and was concerned about the sudden epidemic. He wanted to know the reason behind it and took a tour of the whole forest. He saw dead bodies of different animals everywhere, with worms, maggots and germs growing on them.

Cheeku had never seen something like this before. When animals died in Champakvan, hyenas ate them and ensured that there were no dead bodies rotting. He remembered his friend Henko hyena, whom he had not seen for a long time. He went to look for him but he couldn’t find him anywhere. He met Kallu crow at the riverside.

“Who are you looking for, Cheeku?” Kallu asked.

“Friend, Henko hyena is not to be seen anywhere,” said Cheeku. “Have you seen him?”

“Oh, Henko? Minister Blacky insulted and threw him out of Champakvan about two months ago. Henko and all the hyenas went to Sundarvan,” Kallu said.

“What?” Cheeku exclaimed, now understanding the reason for the epidemic.

Cheeku immediately went to King Shersingh and shared this information with him.

“Your Majesty, Henko and the other hyenas never harmed anyone. They are scavengers who eat dead animals. Since they are not here, diseases are spreading. Hyenas consume all parts of the dead bodies. They eat all rotten and decayed things. When hungry, they even eat leather boots, bones, different types of filth, foul-smelling corpses, even those with worms and germs, that can spread diseases. In this way, they keep our forest clean and disease-free.”

King Shersingh asked Cheeku to go to Sundarvan and bring back Henko and
his friends.

Henko and his companions were happy to come back to their home and immediately got busy cleaning the forest. The epidemic was halted and the animals started recovering.

King Shersingh was pleased with Henko and rewarded him by making him the Health Minister. Cheeku was appointed the court Counselor in appreciation of his wisdom.

Blacky was asked to resign and think about how he could help the animals without being arrogant. 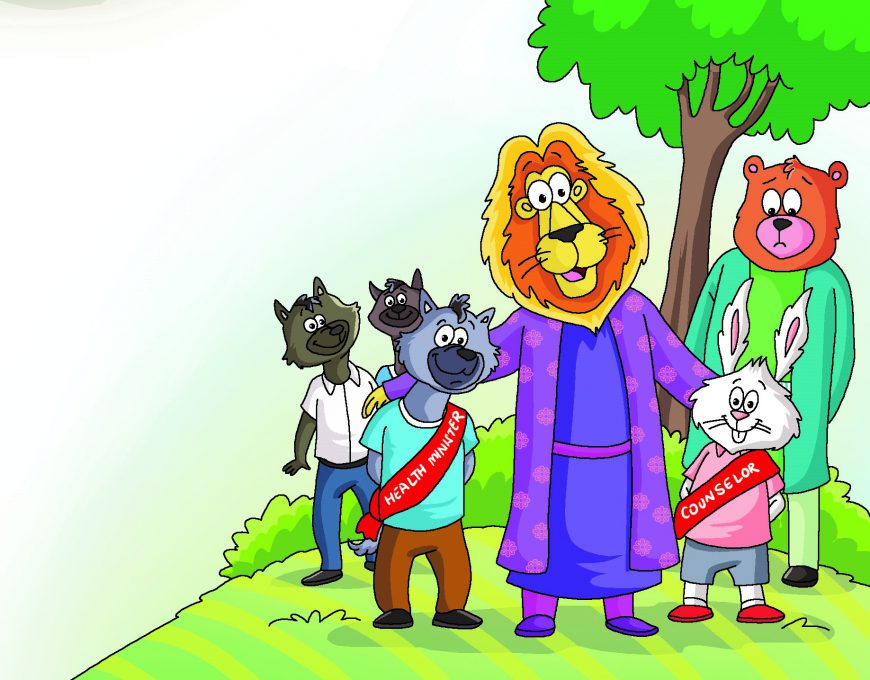 A Good Story, Try To Fill PDF Pages Goodly, I think Cheeku Is A Wise Person