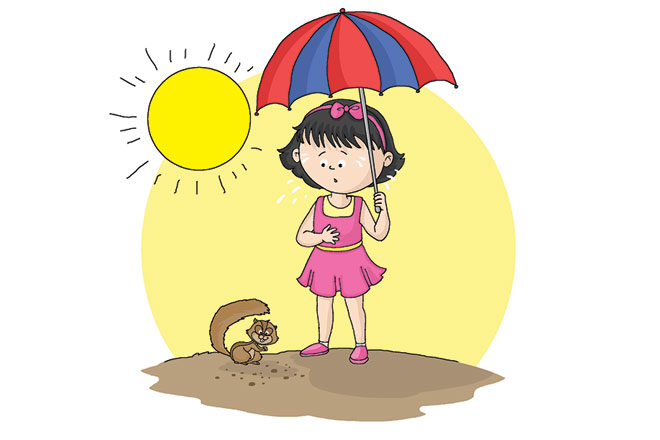 Summer is here. As the sun beats down on us, we need caps and umbrellas to shield us from the harsh sun. So, we carry them whenever we step out.

The cape ground squirrel of South Africa too carries its umbrella everywhere it goes. It cannot leave it behind even if it wants to. Do you know why? Because it uses its tail as an umbrella!

The cape ground squirrel lives in the Kalahari Desert in South Africa. It lives in burrows and not trees, unlike the other squirrels we see in our gardens and parks. This is because there are no trees in the desert.

The squirrel spends it day foraging for plants and seeds around it burrow. So, it cannot avoid going out in the sun. That’s when its bushy tail comes in handy. It uses its bushy tail to cover its head while it is searching for food. While foraging, the squirrel positions itself with its back facing the sun and its tail erect and above its head.

Box: The cape ground squirrel spends the hottest part of the day in its burrow, which are much cooler because that are about 60cms below the ground.