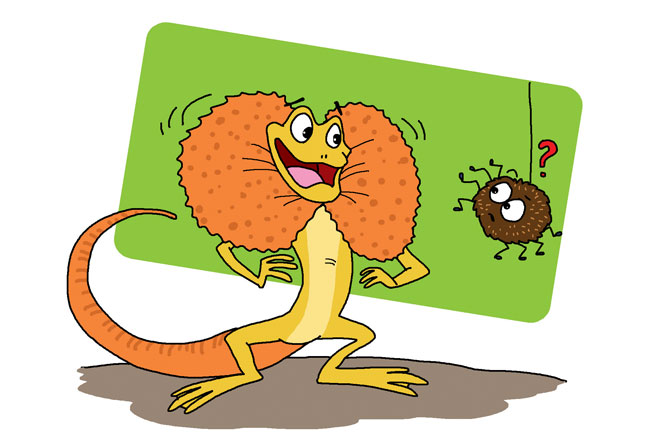 You have seen frills on dresses. But did you know that particular lizards have frills on their neck?

The frilled lizard is commonly found in Australia and spends most of its time on trees, and it comes down only when it needs food. The frill that this lizard sports is a layer of skin that remains folded on its neck.

The neck frill is supported by lines of strong muscles that are connected to its jaw bone. This loose skin is usually a bright colour like red or orange. It expands when the lizard hunts or goes into defence mode.

When the lizard feels threatened, it stands on its hind legs, opens its mouth, unfurls its skin frill and hisses at its predator. However, if it knows that the predator is not intimidated by this show, it just takes an about-turn and sprints to safety. This behaviour of threatening a predator to scare it off is known as deimatic behaviour.

Box: The frilled lizard is also known as the frilled dragon.