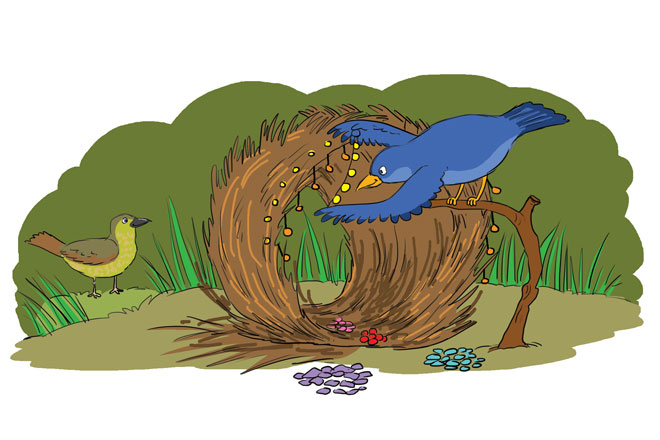 Some people love decorating their house. There are also people who specialise in it called interior decorators. In the animal kingdom too, there is a species of bird that is known for its masterful building and decorating skill.

The bowerbirds are native to Australia and New Guinea. They are known for their unique courtship behaviour. Unlike the peacocks that use their colourful plumage to attract the females, the bowerbirds have to use their talent of building elaborate structures called bowers.

They build two types of structures—one is a tent-like structure supported by a sapling and the other resembles an archway.

The bowerbirds also decorate their bowers with objects they can find in the surroundings, grouping them according to colour. They use objects like flowers, shells, beetles, leaves, and even pens, toys, and paper or bottle caps—as long as they fit their choice of colour.

Box: The female of the species, which usually raises its little ones as a single mother, visits several bowers at a time inspecting the quality of each structure before finally choosing its mate.