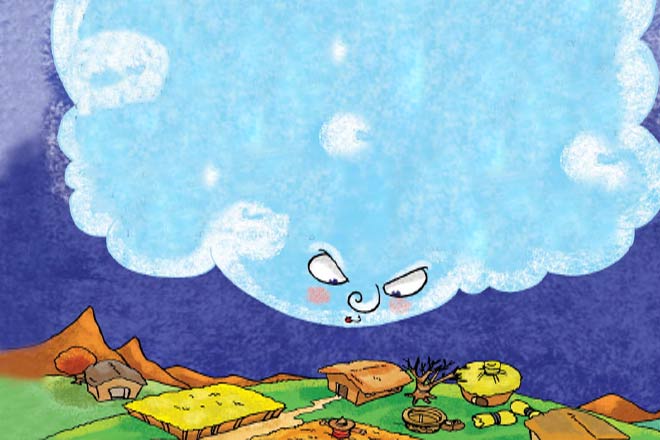 Cloudy Cloud was a young cloud. He liked floating in the sky and causing trouble wherever he went. One day, when Cloudy took a whole lot of water from The Old Sea, The Old Sea felt that it was important to give the young cloud an important lesson.

“When you come across people craving for water,” The Old Sea said, “or farmers standing in the fields who are waiting for you to shower raindrops, don’t disappoint them. Open your heart and quench their thirst. For that is the real purpose of being a cloud. And please, don’t cause trouble or harm anyone.

“Well, I shall see,” Cloudy Cloud said and quickly drifted away. He didn’t like The Old Sea telling him what to do.

“Ha! Everybody wants to give you a lesson and impose their thinking on you,” Cloudy Cloud grumbled. “I will shower raindrops wherever I want. I will do what I please. Let The Old Sea say whatever he wants. I don’t care!”

The people of a village saw Cloudy floating in the sky. Their eyes shone with joy. “Look there! There’s a rain cloud in the sky! It will shower raindrops on our lake! We will have lots of water to drink! Our thirst will be quenched!” the villagers said happily.

But Cloudy Cloud ignored the villagers and drifted away. “Why should I bother if you are hungry or thirsty, huh?” he said and left the poor villagers pining for water.

Cloudy Cloud then floated ahead arrogantly.

After some time, he stopped over a field. The farmers in the field looked up and clapped their hands. They were overjoyed. Their field was parched and they had been eagerly awaiting the rains.

“Now we will get the elixir of life! Our field will receive rainfall! Our crops will grow! We will have grains to eat! This cloud will surely shower rainfall!” the farmers sang and danced.

“Surely shower rainfall, huh?” Cloudy muttered. “Why should I shower rainfall on your field? Am I your servant? Do you think I’ve brought the water especially for your field from so far, huh? Well, I really don’t care about you or your crops!”

Cloudy then made a rude face and moved on. The farmers below blamed The Wind.

“Oh! The rain cloud was blown away! Wind, why did you do that? Our crops won’t grow now! We won’t have food to eat!” they wept.

The Wind who had been watching quietly felt very bad. He scolded Cloudy, “Cloudy, I am being blamed for your mistakes. Why aren’t you showering rain? You are disappointing everyone.”

“Mind your own business!” Cloudy Cloud told The Wind rudely. “Don’t you dare meddle with me or poke your nose in my affairs.”

“Don’t be so arrogant, young fellow” The Wind told Cloudy Cloud. “People will be grateful if you shower rain in places where it ! is needed.” Saying so, The Wind went away, hoping Cloudy would understand.

But Cloudy Cloud didn’t care. He had made up his mind to do what he wanted. He wanted to play pranks and have fun.

He found an old potter who was making mud pots and drizzled all over him.

“Oh no!” the potter cried. “All my efforts have been wasted. The rain has softened all my pots even before they could dry and take shape. I am ruined!”

Cloudy Cloud grinned. He enjoyed seeing the old potter cry. The Wind noticed this and felt very upset. But he knew that no matter how he tried, explaining anything to Cloudy was quite useless.

Cloudy Cloud decided that he would cause more mischief. He showered big drops of rain right above a lawn where a marriage reception was being held. The tents fell apart with the rainfall and the guests at the reception found that they were drenched. The food too was soaked with water and became inedible. There was chaos as everyone was running for shelter.

Cloudy Cloud laughed. He enjoyed having fun at the expense of others. He then drifted ahead, looking for more places to cause trouble. The Wind who had decided to follow Cloudy couldn’t bear to see the damage he was causing. He was very annoyed now.

The Wind then went to his old friend, Tall Mountain. “Tall Mountain, we must do something or this wicked, young cloud will go on troubling everyone.”

“You are right,” Tall Mountain said. “I have been watching Cloudy too. He really is wicked. Don’t worry. I have an idea. We will stop Cloudy from doing any further harm.”

Tall Mountain then explained his idea. A short while later, The Wind found Cloudy Cloud. He was showering raindrops above a clothesline full of dry clothes. “Cloudy Cloud, I won’t stop you from doing what you want! But I have a special request!”

The Wind said politely. “I hope you will listen.”

Cloudy stopped and turned around. He was curious and wondered what The Wind would say. “What is it?” he asked arrogantly.

“Please don’t go close to Tall Mountain! He has a high fever and a bad cold! The doctors have warned him not to get wet,” The Wind told Cloudy. “Is that so?” Cloudy Cloud asked mischievously. Now Cloudy Cloud didn’t know how high and strong Tall Mountain was. He rushed towards Tall Mountain’s peak with all his might and collided into it with a loud bang.

To Cloudy Cloud’s dismay, all the water he had within him splashed out in the form of heavy rain. And soon after that, he began breaking into pieces, like cotton balls.

“Help! I am vanishing! Please help me,” Cloudy Cloud cried as he slowly faded away “I don’t want to disappear!”

The last words that Cloudy Cloud heard before he faded away completely were, “This is what happens to those who cause trouble and try to harm others.”

Cloudy Cloud realized that The Wind and Tall Mountain were talking about him. “I wish I had been a good cloud and listened to The Old Sea and The Wind!” Cloudy Cloud said. He then disappeared completely.