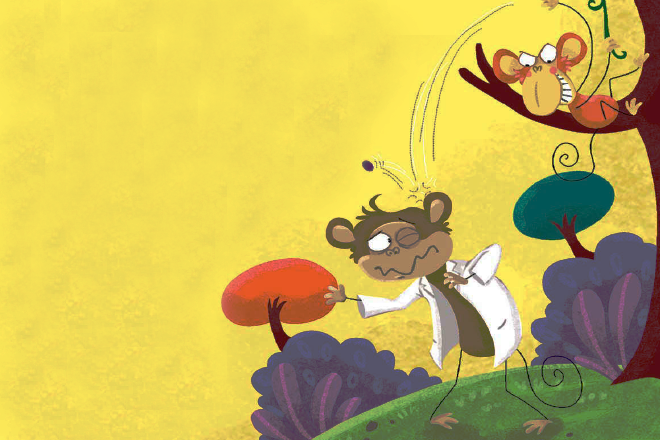 There was once a beautiful forest called Haritvan. In Haritvan lived Tinku, the monkey. Tinku was a prankster and nobody really liked him. His favorite pastime was to climb up a mango or a jamun tree and pelt passersby with the seeds. He was also very adamant and would always throw a tantrum if he didn’t get what he wanted.

Also living in the same forest was Bholu. Bholu was a wellknown scientist and was also the smartest animal in the forest. But, Tinku didn’t really like him and always went out of his way to make fun of Bholu and his inventions. Bholu would be working up in the trees putting together his inventions with wires and pulleys, and all of a sudden Tinku would show up, pelting Bholu with sticks and undoing all his hard work. Bholu believed this was because he had complained to Tinku’s uncle about his behaviour.

One afternoon, Tinku ran out of his house because the food served for lunch was not to his liking. He set off in search of bananas when lo and behold, there was a whole bunch of them right in front of him in a clearing under a tree.

Thinking that somebody must have forgotten and left their bananas behind, Tinku ran up to them and bend down to pick them up.

But, as he stepped close to the bananas, he was swept off his feet and before Tinku could understand what was going on, he was hanging upside down from the tree above him and there was a rope tied to his leg. Tinku tried hard to free himself, but he couldn’t. The rope was made of nylon and he couldn’t break it or cut it with his teeth. He realised that he had been trapped by hunters who put him in a cage and went away. From their discussions, Tinku gathered that they intended to take him out of the forest.

As the hunters prepared for their trip out of the forest, they were suddenly hit by fruits and vegetables.

The attacks seemed to be coming from the trees. Completely confused, the hunters decided it was best to run away. As the attacks continued, Tinku was glad he was in the cage, safe from the attacks. Kiku, the sparrow happened to be passing by when she noticed Tinku stuck inside the cage.

The attacks had stopped by then. She flew up to him and calmed him down before flying off to find Tinku’s uncle Cheeku.

Cheeku ran to the spot where Tinku had been trapped and rescued him. Meanwhile, Kiku had arrived with few more animals from the forest. When Tinku told them about the mysterious attacks on the hunters, everybody was curious to find out who saved Tinku.

Kiku then told everyone that the attacks were from one among many machines that Bholu had installed across the forest. Using a network of wires and sensor, Bholu’s animal security system could detect whether there were any hunters coming into the forest.

Once the location of the hunters was fixed, the machines in the trees would fire fruits and vegetables at them to scare them away.

Tinku realised that the very machine he had made fun of, a long time ago, had saved his life. He realised that making fun of others wasn’t a nice thing to do and neither was throwing fruits at others. Tinku vowed that he would be more responsible and not hurt others in any way.