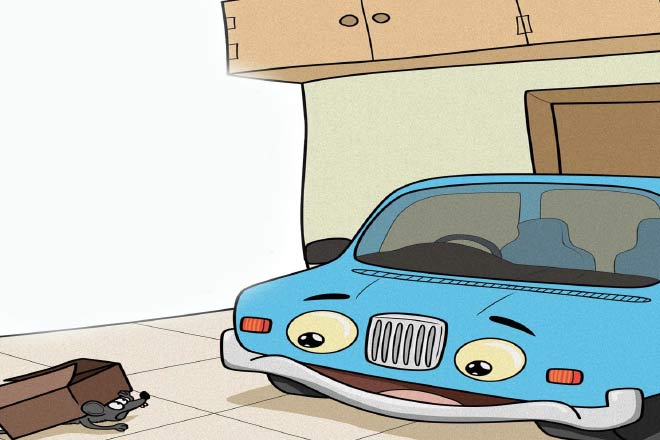 Riya and Manya had gone to their grandparents with their parents. Their car was left alone in the garage.

‘All of them have gone for a vacation but have left me alone here. Now for 20 days, I will be stuck in this darkness. Riya was telling Manya that they are going for 20 days to the grandparents,’ the car thought and felt sad.

The car looked around in the garage to see if there was somebody to talk so that it could pass time. It spotted a rat who was busy eating something.

“Brother Rat, how are you?” When the car called, the rat got terrified and hid inside a box.

“Why are you getting frightened? This is me, the car. You are getting so scared hearing my voice as if I am a cat,” the car laughed, “Anyway leave all these things. For 20 days its just the 2 of us in the house. Everyone has gone out.

Will you play something with me?”

“Later, right now I am going to the kitchen. I won’t get a better opportunity to eat to my heart’s content in the kitchen. I will rule the kitchen for the next 20 days,” the rat said overjoyed and ran out of the garage.

‘I shouldn’t have told him about everybody is out. Now he will not come to the garage,’ the car thought.

It was 12 at night. The car too was trying to sleep. Just then the rat came back running to the garage. “Phew, life saved

“Phew, life saved,” he was panting.

“What happened?” the car was startled.

“You had told me that there is nobody in the house and all will come after 20 days, so I was sleeping in the kitchen. But now 2 people came inside the kitchen. I was about to be crushed under their feet.”

What? I was about to get killed and you are saying that it is nice.”

“No Brother, the man must be Riya and Manya’s father. I am feeling happy thinking that I won’t have to stay locked in the garage for 20 days,” the car said joyfully.

“But none of them was Riya and Manya’s father.”

“Then they must be the neighbours whom they must have asked to keep a check on the house.” “Might be possible,” the rat said. The garage opened at that time and 2 people entered inside.

“Appu, there is a car in the garage. Instead of taking 10 small things from the house, it’s better that we take the car itself,” One man said to the other.

“Pappu, in that case, get inside the car. Let us take the car.”

“Stupid, if we start the car then the neighbours will come to know that there is somebody in the house. This can put us in a loop. We will have to push the car and take it away,” Appu hit Pappu’s head with his hand and said.

“They are thieves,” the car panicked.

“Raise an alarm to chase them away,” the rat said and started shouting loudly saying ‘Thief, thief.

“Stop it. Your voice is so soft that nobody will be able to hear you and even if they do, no human would understand you. It’s anyway good that they are not able to understand you, otherwise, these thieves would have beaten you dead.”

“Till they don’t start the car, I can’t do anything, but you can do something.”

“You blow the horn which will cause a loud sound and the neighbours will wake up. Then these thieves will have to run away,” when the car said this, the rat went inside and stood on the horn but it didn’t blow. By that time Appu and Pappu had pushed the car outside the garage.

“Brother Rat, do something.”

“What should I do? I am standing on the horn but it is not blowing,” the rat said.

Appu and Pappu were taking the car towards the gate. When the rat couldn’t think of anything, he bit Appu’s hand and again stood on the horn. Appu saw the rat inside the car and wanted to punch him.

The rat moved from the horn and Appu’s hand touched the horn which started blowing loudly.

“What are you doing, you stupid? If you will blow the horn at this hour, the neighbours will wake up,” Pappu shouted furiously.

“A rat bit me and I was hitting him.”

“Appu, leave the rat and quickly get out from here,” Pappu said, pushing the car. As soon as they reached the gate, they found the police waiting for them.

“How did the police come here?” Appu was shocked.

“We are here because of your stupid behaviour. We were taking rounds over here when we heard the sound of the horn. We came here wondering who was the horn at this hour and found you two,” the policeman said, putting handcuffs in their hands.

“That means we got caught just because of a rat,” Appu-Pappu said, holding their heads.

“Thank you, Brother Rat. You saved me from those thieves.’

“That was my duty, Sister Car. Now you take rest and I will also leave.”

“Where are you going at this hour?”

“In the kitchen! When else will I get the opportunity to live and eat in the kitchen,” the rat laughed and said. The car too started laughing.