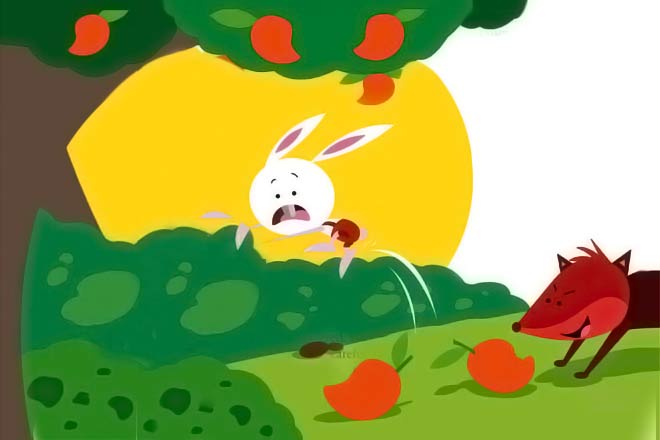 Baby Rabbit was sitting under a tree. He couldn’t concentrate on anything. It was time for him to return home from school. But Baby Rabbit didn’t feel like going back home. His school bag and lunch box were in front of him. He stared at them blankly and remembered the incident that had occurred just a few days ago…

Baby Rabbit had thrown the mango aside and hidden inside bush. Well, who doesn’t love their life? He had then watched with baited breath from inside the bush. The vixen had sat down to eat the mango.

Baby Rabbit’s eyes had filled with tears. He had wanted to scream and tell the vixen that the mango belonged to him. But he had not been able to utter a word. The vixen had gone away after eating the mango. She had sucked the kernel fully too and not left a morsel or a drop of juice.

Baby Rabbit had come home and wept. He had narrated the incident to his mother. Baby Rabbit’s Mother had listened patiently. “Son,” she had then said lovingly. “There is no need to cry so much for a mango. I will go to the market and buy a crateful of mangoes for you. You can eat them to your heart’s content.” Baby Rabbit had not been consoled.

“You are not wicked,” Baby Rabbit’s Mother had said. “You are a brave child, Baby Rabbit. Why would you do something so mean?”

Baby Rabbit sighed. “That’s not the truth, Mother,” he said sadly. “The truth is that I’m weak. I’m even scared to go to school. There is no justice in this jungle. Please don’t call me brave. Everyone fears brave creatures. But no one fears me. If I was brave, no one would have dared to bother me and everyone would have feared me.”

Baby Rabbit’s Mother shook her head sadly. She had no answer for her son. The very same day, Baby Rabbit saw his best friend Snehi Deer running for his life. A tiger was chasing him. Baby Rabbit had hidden behind a tree and watched. Snehi Deer had managed to save himself but had fallen sick after that. The fear of the tiger had given him a high fever.

Like Baby Rabbit, Snehi Deer too thought he was a weak animal and had to struggle to save himself.

Both these incidents had disturbed Baby Rabbit no end. He had not been able to study or play games after that. The fear of being attacked by a vixen or a tiger at any time had shaken him up badly. He often thought of going to King Sher Singh with his fears but was too afraid to do so.

Baby Rabbit began to believe that he was very weak. “I am a coward!” he would cry and say. “I am weak. I am afraid of everyone.” Baby Rabbit picked up his school bag and lunch box and stood up. He slowly walked towards his house. He was still very upset.

There was a pond on the way to Baby Rabbit’s house. He decided to stroll along it just to divert his mind. It was a peaceful and brightly lit spot. Moreover, no wild animals ever came to the pond. So, there was no danger there.

Baby Rabbit saw some frogs in the pond. They were sitting on the lily pads and croaking happily. A cool wind started to blow. It made Baby Rabbit feel like running. He hung his school bag on a tree branch and started to run.

As soon as Baby Rabbit began running, he heard splashing sounds coming from the water. He turned around and saw that all the frogs in the pond had noticed him. They looked very scared of him and were leaping and jumping into the safety of the water. Baby Rabbit was astonished. He stopped to watch. “What?” he said. “There’s no one else here but me! Are those frogs afraid of me?”. Baby Rabbit smiled. He couldn’t believe that there were creatures who were afraid of him too. He took his things and ran back home. He rang the bell continuously till his mother answered the door. “Mother!” he said happily as soon he saw his mother. “I have something to tell you!”

“What is it, Baby Rabbit?” Baby Rabbit’s Mother asked. “You’ve rung the bell so many times. Good children ring the bell only once.” Baby Rabbit hugged his mother and said, “Guess what, Mother? I am brave! I am very brave!”

“Yes, Baby Rabbit! I know that. But what has suddenly made you realise that?” Baby Rabbit’s Mother asked, looking surprised. “All the frogs in the pond dived into the water when they saw me!” Baby Rabbit said and laughed. “I was all by myself but there were at least a dozen frogs. They looked terrified of me!”

“Son, you now know that there are creatures who think they are weaker than you,” Baby Rabbit’s Mother said softly. “Will you stop calling yourself weak now?”

“I will never call myself weak again!” Baby Rabbit said with a smile.

“Very good,” Baby Rabbit’s Mother said. “You are a brave and strong child. But don’t scare the frogs just like the vixen scared you. Being strong and brave doesn’t mean that you should scare others. It means protecting those who are weaker than you. Go back to the pond now and make friends with the frogs. They will stop fearing you and come to play with you.”

“I will do that, Mother!” Baby Rabbit said, running out of the house.

Baby Rabbit then went to the pond and made friends with the frogs who stopped being afraid of him.