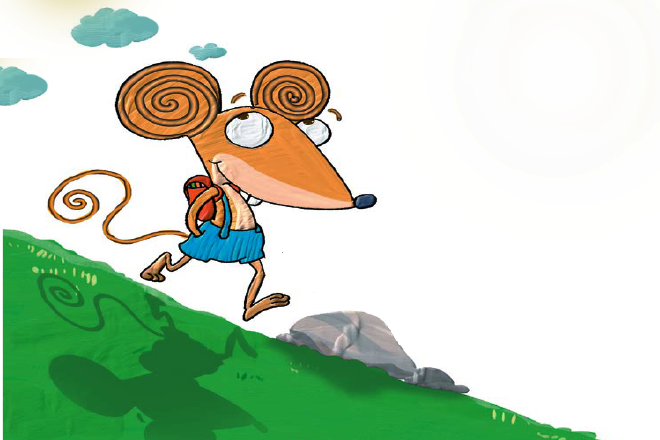 Mohan Mouse liked to walk home from school everyday. Often, along his way home, he would think about everything that had happened during the day in his class. He would recollect the things his friends did and said, and what his teachers taught and spoke of during the lessons.

The walk made Mohan Mouse feel good. Not only did it help him exercise but it also made him feel relaxed and at ease since the route home was surrounded by some shady green trees.

The only thing that Mohan Mouse didn’t like during his walk was his thoughts being interrupted. And today, Mohan Mouse was strolling along as usual. He was smiling as he recollected how his teacher had praised him for the assignment he had done so well when he was suddenly interrupted.

hita Mohan Mouse’s shoe hit a big rock that was lying on the sidewalk. Mohan tripped and swayed and almost fell down.

“Ow! This is ridiculous!” Mohan Mouse said furiously. “I could have fallen down and hurt myself. It was fortunate that I didn’t lose my balance. Who would be silly enough to leave a rock this big on the sidewalk?” Mohan Mouse was really very annoyed. “And what I am most upset about is that my pleasant thoughts have been interrupted because of this silly rock!” he grumbled.

Mohan Mouse lifted his foot and gave the rock a hard kick. He thought that the rock would roll and go further ahead, far away from him. But the rock didn’t move an inch.

He then gathered all his strength and gave the rock another kick. The rock flew through the air now. And to Mohan Mouse’s great horror, it hit the glass pane of a window of a nearby house.

“Yikes!” Mohan said and gasped. “I have broken someone’s window and caused them damage.”

Mohan Mouse’s knees began to shake. He was terrified. He flew like the wind, hoping no one had seen him. He knew that running away was a cowardly thing to do. But at the same time, he was scared and didn’t want anyone to come out of the house and scold him.

Mohan Mouse knew that he would be in big trouble if someone saw him. And so, he ran all the way and only stopped after he had entered his house. He then shut himself in his bedroom.

“Oh dear me!” Mohan Mouse muttered to himself. “Maybe I should tell someone about what I’ve done? Maybe I should tell Ma and Pa?” But he then decided against it. “They might punish me for being careless and for damaging someone’s property,” he thought. “I better keep quiet about it. It will be my little secret, that’s all!” Mohan Mouse began to feel relaxed. He was sure that he would get away scot free since he was sure that no one had seen him. “No one knows I was responsible for breaking the window,” he thought confidently. “I have no reason to fear.”

But then something happened that surprised Mohan no end. He found that he could think of nothing else but the incident. “I have done something wrong,” he thought and sighed every now and then. “I should own up and tell someone the truth.”

Soon, Mohan Mouse started feeling guilty. He found that he couldn’t sleep a wink at night. He sat up in bed, wondering what to do.

“I am very ashamed of myself,” Mohan Mouse whispered to himself. “I will go to the house tomorrow and apologise to the owner for breaking the window.”

The next morning, he told his parents about what had happened. “I have money saved in my piggy bank,” he said. “I am going to offer to pay for the damage I’ve caused.”

Mohan’s parents felt very proud of him. “Since you have been so honest and told us the truth, we will help you and pay for the damages. You can keep your money in the piggy bank and use it another day. We appreciate your truthfulness and this will be your reward, Mohan.”

Mohan Mouse felt happy that he had such supportive parents. He then scampered towards the house. He rang the door bell and waited, his heart thumping like a drum. A man opened the door. “Can I help you?” he asked Mohan Mouse, looking slightly surprised. “Er…I broke your window pane accidentally yesterday,” Mohan Mouse said politely, even though he was feeling very nervous. “I have come to apologise. I am really very sorry.” The man smiled at Mohan and patted his little head. “It was very brave of you to come back and offer money for the repairs,” he said. “I’m sorry once again,” Mohan Mouse replied sincerely.

“You coming back here and owning up shows that you have character,” the man said. “Your parents must be very proud of you.”

Mohan Mouse smiled. He felt much better. He realised that even though he had made a mistake, he had set it right, by doing the right thing.

“I am glad I have character,” he said to himself as he walked away. “After all, it is character that makes a mouse!”