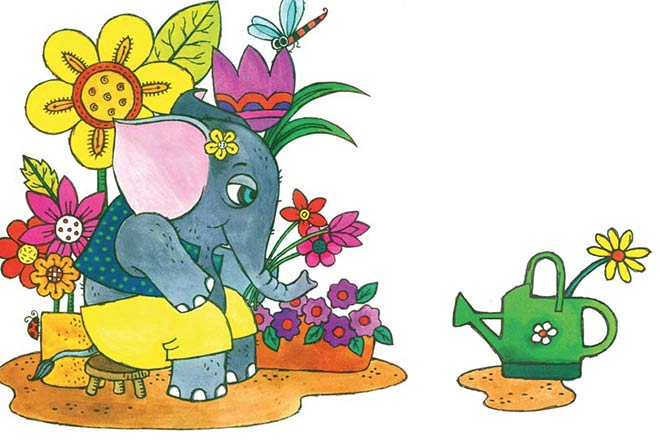 Elle Elephant was a florist. He owned a small flower shop in Champakvan. Elle was a good-natured fellow and took good care of his customers. He had even hung a beautiful wooden board outside his shop. On the board was painted in bold letters, “ELLE FLORIST. Buy our flowers. They are beautiful and fragrant. They are fresh and will make you feel refreshed through the day.”

Elle Elephant was very courteous to all his customers. “He is always smiling, just like his flowers!” Elle Elephant’s customers would often say.

But Elle Elephant had a rule that he followed very strictly. He only sold his flowers to the animals and birds who paid him right away. He didn’t give credit to anyone. None of the customers even bothered to ask for credit for they knew what a hard worker the young elephant was and that he deserved to be paid right away.

Elle Elephant would sell some of the lotus flowers from his shop. He would personally deliver the others to the homes and shops of the animals who didn’t have the time to come to his shop. He didn’t charge them anything extra.

Everyone was impressed by the trouble Elle Elephant took. This resulted in good business for the shop. Dimpy Monkey was very fond of lotus flowers. He was a tailor and owned a small tailoring shop in Champakvan. Dimpy Monkey liked putting the lotus flowers in a vase that he had on his workbench. He relished their fragrance.

Like Elle Elephant, Dimpy Monkey was an expert at his work too. Everyone liked the clothes he stitched. They looked nice and fitted well. And so, Dimpy Monkey’s shop was always crowded.

But Dimpy Monkey’s nature was quite different from Elle Elephant’s.

Dimpy Monkey was a grumpy fellow. He lost his temper very quickly too. Even the pettiest matter annoyed Dimpy Monkey no end. He wore glasses and every time he got angry and shouted, his glasses appeared like they were dancing on his nose.

Nobody liked Dimpy Monkey because of his foul temper. But there was no other tailor better than him in Champakvan. And so, all the animals in the forest had no choice but to ask Dimpy Monkey to stitch their clothes.

Elle Elephant would take fresh lotus flowers to Dimpy Monkey’s shop every day. He would politely ask him for the money after leaving the flowers near the vase on the workbench.

Once Dimpy Monkey had paid Elle Elephant the money, he would leave quietly.

One morning, Elle Elephant went to the tailoring shop as usual to deliver a bunch of lotus flowers. He found Dimpy Monkey in the middle of an argument with a customer.

“Here are your lotus flowers. Please give me my money now. I can’t wait any longer. I have to reach my shop soon. My customers will be waiting for me.” Dimpy Monkey was in a terrible mood. “Put the flowers in the vase!” he scowled and said. “I will give you the money tomorrow.”

“You know I don’t give anyone credit,” Elle Elephant said courteously. “It will take you less than a minute to reach into your pocket and give me my money.”

To Elle Elephant’s surprise, Dimpy Monkey grew furious. “Fatso,” he shouted. “I have already told you that I will pay you your money tomorrow. Now stop bothering me and get out of my shop!”

Elle Elephant lost his temper too now. He didn’t like being insulted or spoken to so rudely. “Well Dimpy,” Elle Elephant said, sounding very annoyed. “I want my money right now. If you don’t pay me right now, I’ll take my flowers back.”

This made matters worse. Dimpy Monkey flew into a rage.

Without even stopping to think, he picked up a pair of scissors and poked Elle Elephant’s trunk. “You want money, Elle Elephant?” Dimpy Monkey shouted. The glasses on his nose danced. “Well, this is your money!”

“Ow!” Elle Elephant howled in pain. He then ran out of the shop.

Dimpy Monkey laughed as he saw Elle Elephant holding his trunk and running on the street. “I’ve scared Elle Elephant away!” he thought and began cutting a piece of cloth.

More From Champak: Help Yourself

Dimpy Monkey was surprised to see him. But before he could say anything, Elle Elephant threw some muddy water that he had in his trunk all over Dimpy Monkey’s shop. The new clothes that Dimpy Monkey had stitched got dirty and there were small puddles of mud everywhere.

Dimpy Monkey was astonished. “Oh no!” he cried.

“Elle Elephant has ruined my customers’ new clothes! I have taken so much trouble to stitch them. What will I tell my customers now when they come asking for their new clothes?”

Nothing like that had happened to Dimpy Monkey before. No one had dared to stand up to him or teach him a lesson.

“I shouldn’t have poked Elle Elephant’s trunk,” he said regretfully.

When Dimpy Monkey’s customers came to take their clothes, Dimpy had no choice but to tell them what had happened.

“Dimpy Monkey,” each and every one of Dimpy Monkey’s customers said. “You always lose your temper at others. You are always rude to others. Today, you have found your match.”

Dimpy Monkey felt very embarrassed. He decided he would never lose his temper or hurt anyone again. He even apologized to Elle Elephant for poking his trunk and was never rude to him again.