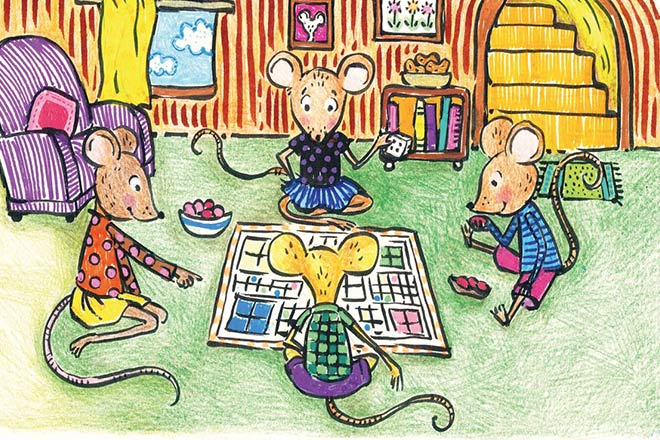 It was Sunday and the four rats Rinku, Minku, Chinku and Pinku had just finished their homework. It was raining outside so they decided to play some indoor games.

“It has been rather long since we played Ludo,” said Rinku.

Hearing what Rinku was saying about the game Chinku also got excited. He said, “Let’s play Ludo. It will be quite interesting, and I like to cut others’ token too.”

Hearing this Tinku said, “But when your token gets cut, you start crying.”

Chinku replied, “That was a long time back when I was younger. Today if my token gets cut, I will not cry.”

All of the friends started playing. They got some of their tokens cut and the other tokens reached home. They didn’t notice that the rain had stopped and the sun was shining outside.

The game was interesting, until suddenly Bunty, the rat came in and said, “My dear friends, please allow me to play with you.”

If Bunty had to play, one of the other four rats would have to leave as only four people are allowed to play Ludo on one board.

No Place to Play

They thought about ways in which they could stop Bunty from joining this game.

Rinku who had a sharp memory said, “Bunty, we would have allowed you to play, but there’s a thing we don’t like about you.”

“What is that?” said Bunty, quite surprised.

“You don’t have a bath every day, and stink. We can’t make you sit near us,” said Rinku.

Hearing this Bunty said, “Ah! Luckily today I took a shower and I have worn neat clothes too. If you don’t believe what I’m saying, you can smell me. I am not stinking.”

All of them realised that Bunty was saying the truth.

“Now what can we tell him?” thought Tinku, scratching his head Tinku said, “It’s okay that you have taken a bath but your tail is still very dirty. It is too long. When you move around, it touches the ground.”

Bunty saw that his tail was really very long and dirty too.

“No problem, I will wash it and come back,” said Bunty.

Bunty went near the tap and washed his tail nicely. He came back and said, “Now you see how clean my tail is. Can I play with you?” “How can we tackle him?” thought Tinku.

Right then Pinku said, “Your tail is neat but it’s still wet. Go and dry it.”

“But how shall I dry my tail? I don’t have a towel or handkerchief to dry it,” said Bunty, sounding sad.

“Go and stand under the sun. When it dries, you can come in and play with us,” said Pinku. Poor Bunty went and stood under the sun, waiting for his tail to dry.

When his tail dried, Bunty came in and said, “See, my tail is dry. Now, do you have any problem if I join you in your game?”

All four rats saw that Bunty’s tail was clean and dry. But they still didn’t want him to join their game and they were thinking of new reasons to send him away.

Rinku said, “It would be lovely if you could play with us, but you don’t know how to count. How will you move your token?”

Hearing Rinku’s words Bunty became very sad. He did not know how to read and write. His parents tried to send him to school but he did not go. He was only interested in playing games and roaming around. He started to cry.

More From Champak: Damru And The Play Cut

Seeing this, all four of them felt bad. Pinku said, “Don’t cry Bunty, we were just joking. Play with us, but you have to be somebody’s partner. You throw the dice and your partner will move the token. This way you will also enjoy the game. And from now on if you want to play this game you have to learn to count.”

Hearing Pinku’s words Bunty said, “From now on I will also go to school and study so that I can enjoy all these things. I have lost on many things because I did not know how to read and write. I was always dependant on other people to send messages, or to use a mobile, or play games or even while dialling a phone number.”

Hearing this, all four friends said, “We will help you in your studies and also teach you.” Everybody started playing Ludo together and enjoyed it too.