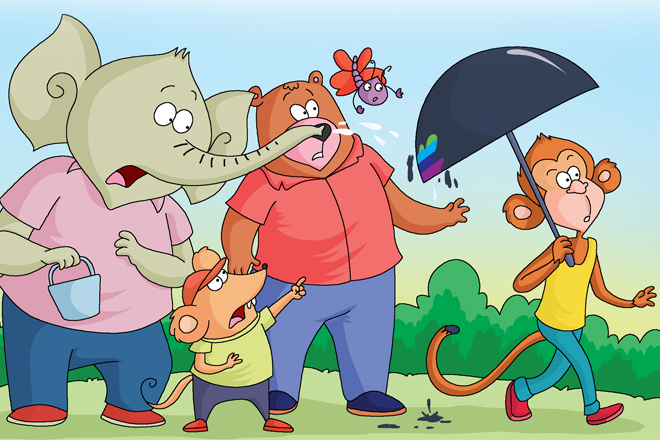 It was a sunny day Meeku mouse stepped out of his house with his eye-catching colourful umbrella.

“Wow! Meeku, your umbrella is beautiful! Where did you get it from?” asked Blacky bear, looking at Meeku’s umbrella.

“I bought it in the city,” said Meeku proudly.

“Meeku, you should have bought one for me too! You know I love umbrellas,” said Jumpy monkey from the tree.

“I would have surely bought one for you, but the shop had only one in this variety,” replied Meeku. “That’s okay, Meeku. The next time when you go to the city, please get me an umbrella just like this one,” requested Jumpy.

“Certainly! Next time I go to the city, I will definitely get you one,” reassured Meeku.

That day on, whenever Jumpy saw Meeku, he always asked about the umbrella.

“Did you go to the city?” asked Jumpy.

“Jumpy, this is the fifth time in four days that you are asking me this question! I have not had an opportunity to go to the city yet. If I had gone, wouldn’t I have got you the umbrella?” said Meeku with irritation.

Jumpy was offended. “Meeku, do you think that I can’t get one myself? I don’t need your help anymore!” said Jumpy angrily and walked away.

Jumpy was not seen in the jungle for the next two days.

On the third day, Blacky spotted Jumpy leaving his house.

“Jumpy! Where were the last two days? Do you know what’s been going on in the jungle?” asked Blacky.

“Meeku’s umbrella has been missing since the last three days; looks like someone has stolen it,” said Blacky.

“Oh no! Who could it have been?” wondered Jumpy.

“Now tell me, where were you the last couple of days?” asked Blacky.

“I had gone to the city,” replied Jumpy.

“The city? Then you must have surely bought the umbrella! Do show it to me!” said Blacky.

“Surely, Blacky, but at I have some urgent work now. I will show it to you later,” said Jumpy hurriedly.

“Okay. I will come back later then,” said Blacky. That afternoon, it was quite hot, so Jumpy went out carrying his umbrella. He met Jumbo, Blacky and Meeku along the way.

“Hi Jumpy! That’s a nice umbrella; it’s not as colourful as Meeku’s though. I thought you wanted one just like that,” said Jumbo elephant.

“I know, but the shopkeeper didn’t have one. He only had this black umbrella, so I thought since I had gone all the way to buy one, I might as well buy this,” explained Jumpy.

As they were talking, Titu butterfly flew over them carrying a bucket full of water.

“Careful, Titu! The water may spill over my umbrella!” said Jumpy nervously.

“But Jumpy, it’s an umbrella and it is supposed to be waterproof!” said Jumbo.

That’s when Jumpy realised he had blurted out. “Yes, of course, but mine’s special and it’s new. I don’t want to wear it out so soon. Anyway, I have to go home now,” said Jumpy hurriedly.

Jumbo felt that Jumpy was behaving oddly. And as Jumpy turned to leave, Jumbo spotted some black paint on his tail. Jumbo realised what was going on. He got some water from Titu and sprayed it on Jumpy’s umbrella. To everyone’s surprise, the black colour was washed away, revealing a colourful umbrella. Jumpy was embarrassed.

“Hey! That looks exactly like my rainbow umbrella!” said a shocked Meeku.

“Yes, but it is not yours! I bought it from the city today,” said Jumpy holding on to his umbrella tight.

“Then why did you paint it black?” asked Meeku suspiciously.

“That is because as soon as I got to know that Meeku’s umbrella was missing, I thought everyone would assume that I was the one who stole it as my umbrella looks exactly like his,” explained Jumpy.

“In that case, prove that this is your umbrella. You must have the receipt as proof of purchase,” said Meeku.

“Actually, I was so excited that finally I was able to buy the umbrella that I forgot to collect the receipt,” replied Jumpy.

Meeku was not convinced. “You don’t have the receipt and you changed the colour of the umbrella—these clearly prove that you have stolen my umbrella!” shouted Meeku. As they were arguing, they heard someone call out to Meeku: “There you are, Meeku! I have been looking everywhere for you!”

Meeku turned around to see Cheeku rabbit walking towards them holding Meeku’s umbrella.

“Cheeku, is that my umbrella? Where did you find it?” asked Meeku surprised.

“Yes, it is. When I came over to your house two days ago, it was very hot, so you lent me your umbrella to carry back home with me. After that I had to go out of town urgently, so I couldn’t return it to you earlier,” replied Cheeku.

“Oh yes! I had completely forgotten about this,” said Meeku. He then apologised to Jumpy. “Please forgive me. I didn’t trust you and assumed you had stolen my umbrella,” said Meeku ashamed.

“That’s okay, Meeku. I now realise how my behaviour could have raised suspicion. I shouldn’t have tried to hide the truth,” said Jumpy.

“Both of you have learnt your lesson. Now, I have learnt mine—never step out without an umbrella in this heat!” said Jumbo, sweating profusely. Everyone laughed and gathered under the two colourful umbrellas.