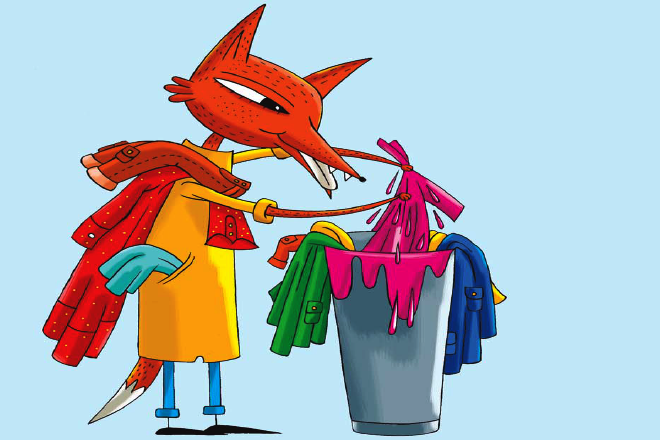 Chinku Jackal ran a laundry in Champakvan. He enjoyed washing and ironing clothes so much that he often gave his customers big discounts. This made him very popular with all the animals who lived in Champakvan.

But there was something about Chinku Jackal that everyone disapproved of. Well, Chinku Jackal could be very naughty. He enjoyed playing pranks on everyone around him. He never stopped to think if his pranks were causing anyone trouble.

When spring came and Holi was around the corner, all the animals in the forest began preparing for the festival. While some of them busied themselves with cooking Holi delicacies, some others went to buy Holi colours from the nearby towns.

When the festival came even closer, Chinku Jackal, who was working in his laundry, decided that it was time for him to play another prank.

“I must play a prank on everyone this Holi,” he thought. “I will have plenty of fun!”

And so, Chinku Jackal went to the nearest town and bought packets of red, yellow, green, pink and all the other colours that he could find. He then mixed them all in a tub of water and made a solution that was a bright pink in colour.

Chinku Jackal then took all the clothes he had in his laundry and soaked them in the tub. After a while, he pulled the clothes out and grinned. They all had had big pink stains all over them. He then put them out to dry.

Chinku Jackal giggled, when he left his laundry to deliver the clothes the next morning.

“Don’t feel bad!” Chinku Jackal said along the way as he practiced the explanation he would give his customers. “It’s Holi after all!”

He soon reached Minky Cat’s house. She was one of his oldest customers.

“Good Morning, Chinku!” Minky Cat replied in an equally cheerful tone. “Have you brought my clothes?”

“Of course, I have!” Chinku Jackal said and chuckled.

Minky Cat shrieked the moment she saw her clothes. “What has happened to my clothes?” she wailed. “Why have they turned pink?” Minky Cat grew furious. “Is this another prank of yours, Chinku?” she shouted. “Have you deliberately soaked my clothes in pink colour?”

“I have,” Chinku Jackal admitted and laughed. “But since it is Holi tomorrow, you shouldn’t be angry with me!”

Chinku Jackal then went to deliver the rest of the clothes. He giggled when he saw Chubby Mouse, Daboo Lion and the others panic the moment they saw their clothes. And when they scolded him, he simply shouted, “Come on! It is Holi after all!”

“It is Holi tomorrow, Chinku,” Chubby Mouse said. “All the animals have decided to celebrate together. We are meeting at 8 o’clock in the playground tomorrow morning. Why don’t you join us? It will be fun.”

Chinku Jackal was delighted. “I will surely join you all!” he said. “Thanks for inviting me!”

He looked around and saw some colourful balloons hanging on the branches of the trees. There was a table full of plates of sweets like ladoos and jalebis nearby. There were some water pistols kept on the table too. And a huge tub filled with coloured water was right beside the table.

“Ah!” Chinku Jackal thought. “The animals are having a grand celebration! I’m glad that they invited me! I’m going to have plenty of fun here!”

Chinku Jackal then stretched his arm out and tried to pull one of the balloons down.

The balloon burst and splashed some bright red coloured water right on to his face!

“Eek!” Chinku Jackal shouted as he wiped his face. “Eww!” he screamed as he spat some of the water that had gone into his mouth.

He ran to the table and popped some of the ladoos and jalebis into his mouth, hoping to change the awful taste. But to his surprise, the sweets weren’t one bit sweet! They were bitter! And full of a dark green colour!

“Ugh!” Chinku Jackal shouted. “What horrible sweets! They have turned my mouth bitter and green!” He turned to go home but just before he could leave the playground, Chubby Mouse, Minky Cat, Daboo Lion and all the other animals whose clothes he had stained, jumped out from behind the trees. They picked Chinku Jackal up and dunked him in the tub of coloured water.

Minky Cat went closer to Chinku Jackal’s ear and whispered, “How did you like our prank, Chinku? Was it as good as yours?”

Chinku Jackal realised what Minky Cat wanted to say. He hung his head low. “I’ve been playing pranks on you all for a long time,” he said. “That’s why you have played one on me today.”

“Holi is a festival that is celebrated with love and harmony, Chinku,” Minky Cat said. “It’s not meant for playing pranks or annoying anyone.”

“She’s right, Chinku,” Daboo Lion added. “Holi is a festival for everyone to have fun but not at the expense of others. Come on! Let’s celebrate with the right spirit!”

All the animals then helped Chinku Jackal climb out of the tub. They played with him and brought him some ladoos and jalebis that were really sweet to eat.

Chinku Jackal had the best Holi ever. He spent the rest of the day washing all the clothes he had stained. And he made up his mind not to play pranks on anyone again.