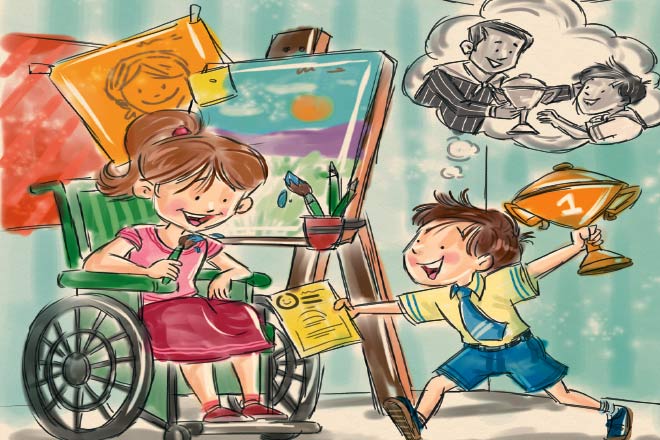 Didi, Didi, look at what I have.” eight year old Rohit entered Sarita Didi’s room. He showed her a trophy that he held in his hands.

“Wow, this looks beautiful. Why have you got this shining trophy, Rohit?” Sarita asked her brother.

“Didi, at the scout camp, I was chosen as the best roller skater. They gave me a cheque for Rs. 500 and a trophy.”

“Congratulations, Rohit. I am proud of you,” said Sarita.

She had tears of happiness in her eyes.

Since childhood, Sarita had been affected by polio. She couldn’t walk. She had to use a wheelchair to move around.

Despite her condition, Sarita didn’t lose heart. She was good at painting. In fact, she had just completed a painting for a competition.

After he saw her painting Rohit said, “I am sure that your painting is going to win the first prize.”

Sarita replied, “It will get a prize only if you will submit it at the Town Hall by 5 O’clock today.”

“Didi, don’t worry. I will go and submit it immediately,” said Rohit.

He covered the painting with a newspaper and left.

He had walked a little farther distance, when he heard a voice shouting, “Thief… thief.”

Rohit saw a masked man holding a black bag in his hand. The man ran ahead of him.

An old man, who was limping behind him said, “Somebody catch him, this thief is stealing my bag.”

“Baba, has he taken off with your bag?” Rohit asked.

The old man replied, “Son, that bag has 5 lakhs rupees in it. I was going to deposit the money in the bank. I don’t know how he snatched the bag from my hands.”

Rohit was thinking. He wanted to help the old man. Just then, he noticed a boy of his age in the nearby park. He was practicing with his roller skates. Rohit ran towards him and requested him to lend him his skates for a while.

The boy agreed to do so. Rohit immediately put on the skates on his feet and borrowed the old man’s walking stick. He then skated in the direction that the thief’ had taken. Skating at a high speed, Rohit followed the thief. Onlookers were surprised to see a small child chase a thief. They moved aside to give him way.

Even in his dreams, the thief could not have imagined that someone would catch him. As soon as Rohit reached close, he pushed the old man’s stick on the thief’s leg.

The thief fell flat on the road. The bag slipped out from his hands and fell at a distance. Rohit quickly picked up the bag. He alerted a few passersby. A few people came running towards the thief. They tied him up with a rope so that he couldn’t flee.

Meanwhile, somebody had called the police. The police arrived shortly.

The police inspector said, “He is the most infamous criminal in the city. We have wanted to nab him for a while.”

He added, “Well done, son. You will be rewarded for your courage and presence of mind.”

Rohit was happy. After submitting the painting at the Town Hall, he returned home to his sister. He narrated the incident. Sarita hugged her courageous brother.