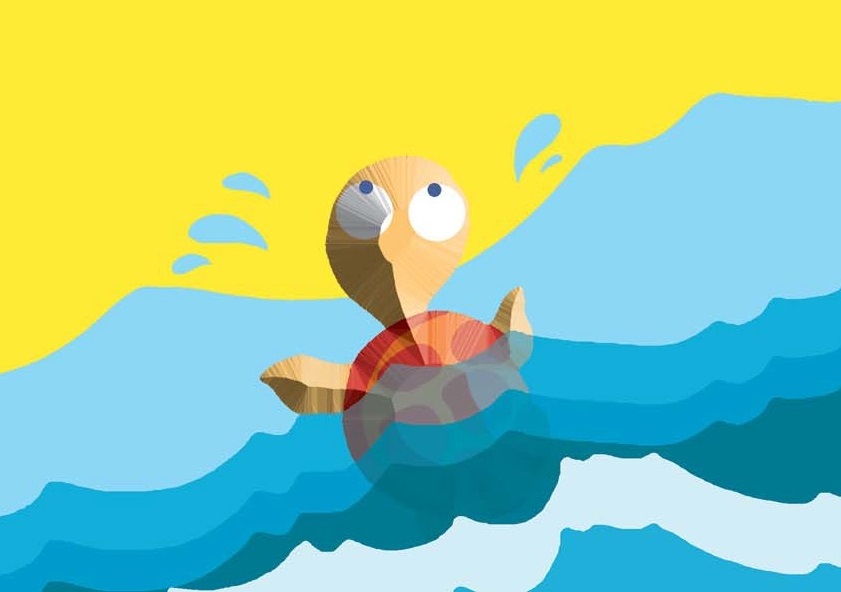 Titu Turtle lived in the sea. One morning, she carefully dug a hole in the sand and laid four eggs in it. She then covered the hole gently with some sand and twigs.

“I am tired now,” Titu then said to herself. “I should go for a swim and refresh myself.”

Titu then dived into the sea and went for a long swim. After a few days, Titu’s eggs hatched, and four tiny baby turtles emerged from the egg shells. Titu was overjoyed to see her children. “My babies!” she said happily. “I am so glad to see you! Welcome to the world!”

Soon, the peaceful and picturesque sight of the sea prompted the baby s to swim in it.

“Mama,” one of the baby turtles told Titu one day. “May we swim with you? The sea looks so inviting! The waves look like fun! We can’t wait to dive in and swim!”

The baby turtles crawled and followed Titu into the sea.

Dubdub was the tiniest of them all. No one realised that he had been left behind. Dubdub slowly crawled towards the sea, hoping to catch up with his mother, and brothers and sisters.

It was then when he noticed a tiny crab that was walking sideways. The crab’s body seemed to be shining and looked quite transparent too.

Dubdub was astonished to see the crab. He hadn’t seen one before.

“How wonderful everything is! Life was boring inside the egg! There is so much for me to see in the world now!” he thought happily.

Then instead of going towards the sea, Dubdub crawled towards a cluster of shells and admired them. They were a bright pink in colour and Dubdub was quite fascinated to see them.

Little did Dubdub know that while he was marvelling at the sights around him, someone was watching him from the sky, with greedy eyes. It was none other than Eddy, the mighty eagle, who was looking for lunch. Eddy was a big and dangerous bird. He had a sharp beak and huge talons that he used to tear his prey apart with. All the turtles including Titu feared Eddy. The turtles dived into the sea, every time they saw Eddy hovering in the sky.

Eddy flew closer to Dubdub. Though Dubdub was very young, he spotted Eddy and sensed that he was dangerous. He saw Eddy swooping towards him from the corner of his eye.

“Something doesn’t feel right about that bird,” Dubdub told himself. “For some reason, I feel afraid of him. He probably eats little turtles like me! I must be very careful!”

Dubdub then gathered all the courage he had and spoke to Eddy.

“Hello there!” Dubdub said cheerfully. “I was waiting for you.”

Eddy was surprised. “Waiting for me, huh?” he asked. “How come?”

“I’ve heard that you cannot walk on your talons,” Dubdub explained.

“Who told you that?” he shouted. “Of course, I can walk on my talons.”

“No, you cannot,” said Dubdub. “I have heard that you look like a clown, every time you try to walk on the sand!”

Eddy stomped his talons angrily and kicked some sand in the air.

“I definitely don’t look like a clown,” he argued.

“Well, I’ll decide for myself,” Dubdub said, looking towards the sea. “Why don’t you show me how you walk?”

“I’ll show you how well I walk!” Eddy said. He then began walking on his talons right in front of Dubdub.

“Not bad! Not bad at all!” Dubdub said. “But is it true that you can’t somersault like us turtles? Can you do this?” Dubdub  demonstrated a somersault.

“Yes, I can do that,” Eddy said huffily. He then tried doing somersaults but kept losing his balance.

“Hold on! I’m out of practice!” he told Dubdub and panted. “I’ll show you a perfect one in just a few minutes.”

“Don’t worry!” Dubdub said and slowly inched towards the sea. “Take your time! I’m waiting! I’m in no hurry!”

“Somersault in the air?” Eddy said and laughed. “What a silly little turtle you are! Don’t you know that’s child’s play for me?”

“Can you show me how you do it? Please!” Dubdub said, sounding very excited.

“All right then!” Eddy said, putting his chest out. “Watch me go!”

Eddy then flew up the sky. He first flew left, then right, then higher up, and then started somersaulting in the air. He flapped his wings noisily to show off too. After some time, Eddy felt very hungry.

“I better eat that little turtle now,” Eddy said. “All this somersaulting has made me very hungry.”

Eddy swooped down to the sand. But to his great disappointment, Dubdub was nowhere in sight.

“Where are you, little turtle?” Eddy asked, looking around. “Are you hiding in the sand? Come out at once!”

Dubdub was hiding behind a rock in the sea. He peeped and saw Eddy looking for him. Dubdub giggled and shouted, “It was a great show Mr. Eagle! You really can somersault in the sky! But I don’t think you can dive or swim in the sea like me.”

Dubdub then dived into the water and swam to join his family.

“I have been outwitted by a baby turtle!” he grumbled.

He flew back to the sky and hoped that he would find something else to eat for his lunch.