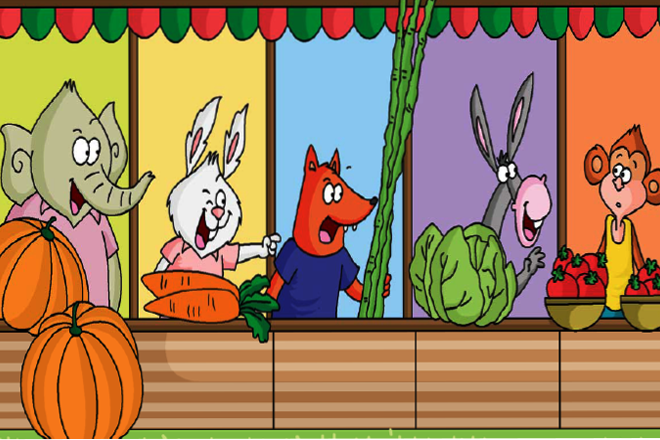 Champakvan was abuzz with excitement. All the animals had been working hard for months preparing for the Champakvan Annual Vegetable Competition. Finally, the day arrived when their farm produce would be judged and the “Best Vegetable” award would be announced.

As always, King Shersingh lion and Prime Minister Blacky bear were the judges. The participants eagerly awaited their turn to present the ‘vegetable of their labour.

There were giant pumpkins, enormous cabbages, huge carrots and tall drumsticks. Cheeku rabbit, Damru donkey, Jumbo elephant and Baddy fox stood proudly next to their exhibits. Next to these eye-catching displays was Jumpy monkey’s small stall with a basket of regular-sized tomatoes. The other animals could not control their amusement at seeing Jumpy’s poor display. They were sure that Jumpy would not even qualify for the competition.

“I am sure to win this competition. Look at the size of my pumpkin,” said Jumbo proudly.

“Don’t be so confident. My carrots shine like gold,” said Cheeku.

“Yes. But we all know who isn’t winning the competition this time,” said Baddy, looking at Jumpy.

“Jumpy, don’t forget to get your participation certificate before you leave,” said Damru.

Everybody laughed. Jumpy did not respond to the comments. He continued to quietly wait for his turn to be judged.

Meanwhile, Shersingh and Blacky visited each participant’s stall. They tasted each vegetable and asked questions about how the vegetables were grown and made notes about them.

“Look at the size of that pumpkin!” exclaimed Shersingh, surveying Jumbo’s display.

“So, how did you grow it, Jumbo?” asked Blacky.

“The secret to its growth is the use of pesticide,” said Jumbo. “I sprayed a good amount of it to kill all the worms. Then I removed chunks of soil to build a solid cement platform on which I placed the pumpkin so that it could continue to grow on a clean base.”

Next, it was Cheeku’s turn. “My gigantic, shiny carrots are the result of a special chemical spray that prevented the caterpillars and earthworms from getting anywhere near my vegetable patch. I also removed all the other plants that grew around the carrot patch, to make a place for those plants to grow without any competition.”

Baddy and Damru too explained how they used special chemicals to make their vegetables grow.

Baddy even diverted water from the stream to his garden to make sure his vegetables were always watered.

Finally, it was Jumpy’s turn. The judges tasted the tomatoes and were surprised at how tasty they were. “Wow! Your tomatoes are so tasty!” said Shersingh. “What chemicals did you use?”

“Thank you, Sir. I did not use any chemicals at all,” said Jumpy.

Everyone was surprised. “Then, how did you manage to grow such tasty tomatoes?” asked Blacky.

“I began by tending to the soil using what I call the ‘three-step magic plan’. First, I dug a shallow pit, planted the tomato seeds and then watered them. This shallow pit held the water within it,

so the seeds had adequate water and there was no wastage of soil because the water wouldn’t run. Then, I planted lots of other plants around the tomato patchplants that would not compete with the tomato plants for the same nutrition. These plants made sure that the soil was not blown away by the wind,” said Jumpy.

Jumpy continued, “And lastly, I added bio-degradable waste, like vegetable peels and fruit pulp, to the soil to act as organic fertiliser and improve the quality of the soil. This is what made the tomatoes tasty.”

Shersingh and Blacky were impressed by Jumpy’s ‘three-step magic plan’ that was simple yet effective.

After a round of discussion with Blacky, Shersingh announced the winner of the Annual Vegetable Competition.

“I am proud to declare Jumpy as the winner of this year’s contest!” announced Shersingh. “Moreover, I also request all animals to hereby follow his ‘three-step magic plan’ while growing their fruits and vegetables.”

Jumpy was ecstatic. The other animals were puzzled.

“But his tomatoes were so small and dulllooking!” whined Jumbo.

“And what’s so special about his so-called magic plan?” asked Baddy.

“His tomatoes may be small but they were the tastiest of all the vegetables I tasted today. They were fresh and free of any chemicals, too. His magic plan is not about magic but about being environmentally conscious while growing plants. His method enriched the soil, did not waste water and did not kill the earthworms,” said Shersingh.

“Of what use are earthworms? They are just pests,” said Cheeku.

On the contrary, earthworms are extremely useful for your plants. They loosen up the soil, which helps increase the amount of air and water that gets into it. They also break down organic waste, like leaves and vegetable peels, into a form that the plants can use,” explained Shersingh.

The animals now realised why Jumpy was declared the winner. They went up to him to congratulate him.

“Yes, it was. And we have also learnt how we can also grow vegetables and fruits without causing harm to the environment and wasting resources,” said Jumbo.

“We want to apologise for making fun of you earlier,” said Baddy.

“Thank you, friends. I am happy that you have learnt that it is not the size and appearance of the vegetable but how it is grown that matters,” said Jumpy. “Could you help us with our farming? Our vegetables would be much better if we followed your method,” said Damru.

“Of course! I would love to help you all,” said a beaming Jumpy.

One thought on “3-Step Magic Plan”

HERE IN THIS STORY CHEEKU IS NOT INTELLIGENT AS BEFORE