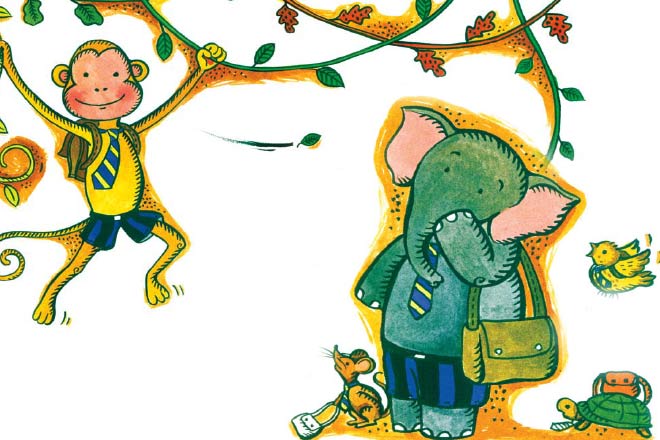 Chintu Monkey and his friends studied in a school in the jungle. The school was located far away from where the animals lived. The young animals would have to walk a long distance to reach the school everyday.

Chintu Monkey didn’t like walking even though he was very adventurous by nature.

There were big trees on both sides of the path that led to the school.

One day, Chintu noticed them and had an idea.

“Hey!” he thought. “I can go to school by swinging from one tree to another tree. If I do that, I won’t have to walk to school like the others do.”

So, Chintu Monkey began swinging on the trees. It saved him a lot of time and also saved him the trouble of walking.

All the other animals watched Chintu Monkey with awe.

All the animals applauded Chintu’s decision of swinging to school. They would whistle and clap and cheer for him when they saw him swinging from tree to tree.

But Chintu Monkey had grown very proud of himself and his clever thinking. He would often make fun of his friends and bully them.

It rained very heavily one morning. There was a strong wind blowing too. Like every day, Chintu Monkey and his friends left their homes to go to school.

“My, the wind is really strong today!” Chotu Rat said. “It will surely blow me away. It’s even blowing the leaves and twigs away from the trees!”

Chotu Rat then turned to Chintu Monkey and said, “Chintu, why don’t you walk with us today? The wind is strong and it’s raining heavily.

It will be safer if you walk.”

Chintu Monkey ignored Chotu Rat’s suggestion. “I am an expert swinger!” he boasted and continued swinging on the trees.

“Ah! This wind is so pleasant,” Chintu thought. “The branches are swaying with it! I’m enjoying the raindrops too! Chotu Rat was silly to suggest that I should walk with them to school today!”

But when Chintu Monkey tried to hold the branch of the next tree, he was in for a rude shock. The branch had bent with the force of the wind and grown weak. It snapped as soon as Chintu caught it and broke into two.

Unfortunately, this branch was right above the river and Chintu Monkey found himself falling into the water below.

Fortunately, Chintu was a good swimmer. He managed to save himself from drowning and swam to the river bank.

But he was soaking wet. His books and school bag were drenched too.

“What shall I do now?” Chintu thought worriedly. “I am as wet as a sponge! If my friends see me in this condition, they will surely laugh at me. We are having a school test today so I really can’t turn around and go home!”

Chintu Monkey panicked and looked around, wondering what to do.

He spotted Tiny Tortoise walking slowly and had an idea.

Tiny Tortoise ignored Chintu and continued walking. It took him a very long time to reach school and he couldn’t waste even a precious moment by stopping.

Besides, Chintu had made fun of him and bullied him so many times.

“Come here, Tiny!” Chintu Monkey commanded. “If you don’t, I will tell the teacher that you haven’t studied for the test.”

Tiny Tortoise was startled. He knew that Chintu Monkey was capable of doing such things.

“Please, don’t do that!” Tiny Tortoise said and stopped. “I will do as you say.” “Good,” Chintu Monkey said. “Now listen carefully, Tiny. I am going to tell all our friends that you were drowning in the river. I will also tell them that I got wet because I jumped in to save you. You have to nod when I tell them that. I do not want anyone to know that I had fallen into the river because of a broken tree branch. Is that understood?”Chintu said sternly.

“We feel very safe in the water. In fact, we can swim very well. Everyone knows that!”

“Don’t worry, Tiny!” Chintu said with a laugh. “Our friends are quite stupid. They will believe my story!”

Soon, Chintu Monkey’s friends came along. They were shocked to see how drenched Chintu was.

“Chintu, what happened to you? How did you fall in the river? Did you fall from the tree?” Chotu Rat asked, looking very shocked.

“Oh! I can’t fall off a tree!” Chintu lied. “I am an expert swinger! I saw Tiny Tortoise falling in the river. He was drowning. I jumped into the water to save him. That’s how I got wet.”

Tiny Tortoise nodded as he had promised.

All the young animals began to clap. “Oh Chintu! You are a hero!” they said. “You saved Tiny Tortoise’s life! Come on! We will tell the teacher about your brave deed. You should be rewarded in front of the entire school.”

Chintu’s friends then ran to school and told Teacher Dumbo Donkey all that they had heard.

“As a reward for saving your friend’s life, I am giving you a holiday today. I will even exempt you from the test. Go home and play.”

Chintu Monkey ran out of the school gates happily. “Ha Ha! I fooled everyone! They think I’m a hero! And guess what? I don’t even have to appear for the test!” he said and laughed.

He then began swinging on the trees again. •