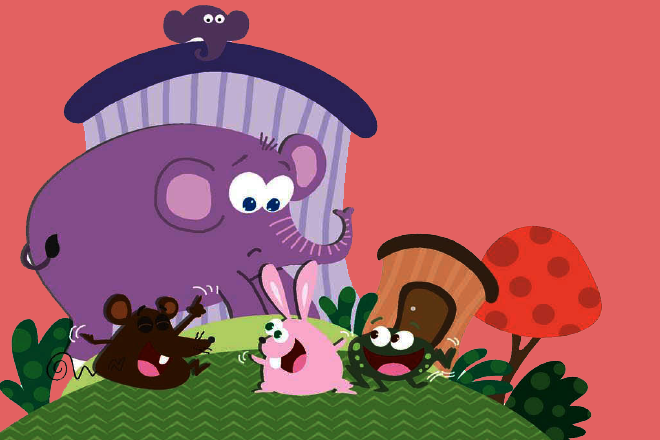 The forest of Mangalvan was surrounded by hills, making Mangalvan one of the most beautiful places to live in. In Mangalvan lived Manny, the mouse. Manny was famous for his pranks and tricks.

In the neighbouring forest of Sundarvan lived Billy, the elephant. Together with his wife, Kimmy, and their son Jimmy, he moved to Mangalvan to start a new life. The house they picked out was right next to Manny’s and while Jimmy wanted to make friends with Manny, he wasn’t really successful.

The problem was that every time Manny saw Jimmy, he would immediately burst out laughing. Manny and his friends would always make fun of Jimmy, but Jimmy didn’t really mind. He was determined to become their friend.

A few days had passed since Jimmy’s arrival to Mangalvan and an announcement was made that a fair would be held soon. People talked about how last year’s fair was a lot of fun and the thought of all the food and the rides only added to the excitement.

As Manny, set off, down a shortcut from behind his house, he didn’t notice a huge ditch in the ground and fell inside. He tried hard to get out, but was too short to climb out on his own.

As he waited in the ditch, hoping that someone to help him out, Jimmy happened to walk by.

Hearing Manny’s cries, Jimmy peered inside the ditch to investigate.

“Hey, what are you doing down there?” Jimmy asked Manny.

Manny was afraid to ask Jimmy for help. He was worried that he would refuse to help because of all the times he had made fun of Jimmy. Nevertheless, since Manny had no choice, he said, “I’ve fallen and I can’t get out. Please help me out of this ditch.” Jimmy reached inside with his trunk and wrapped it around Manny. He picked him up out of the ditch and gently set him down by his side. Manny was was very grateful that Jimmy had saved him.

“Thank you Jimmy,” he said, not making eye contact. “And I’m sorry for making fun of you all the time. It was very wrong of me.”

“Think nothing of it, my friend. You would have helped me out in my time of need too,” said Jimmy, with a smile. Manny and Jimmy had finally become friends, and together, they went to the fair and had a lot of fun together.